Lefferts Blvd station still under repair and covered in poop 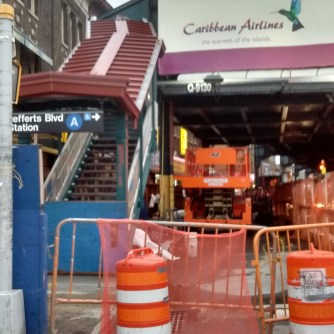 It’s almost the middle of May, about 6 weeks into the 2nd quarter of 2017, and the notorious tardiness renovating the Lefferts Blvd. station continues unabated and sadly unconcerned by the higher administrative brass and even the thousands of commuters who rely on this heavily populated hub. The stairway and the handicap accessible elevator look complete but are still surrounded by machinery, giant orange thimbles and partition fencing obstructing the majority of the sidewalk. And it’s still causing massive bottlenecks of people exiting and entering the station.

But during my last visit, I happened to meet the curators of the year long fecal art exhibition at the turnstiles. 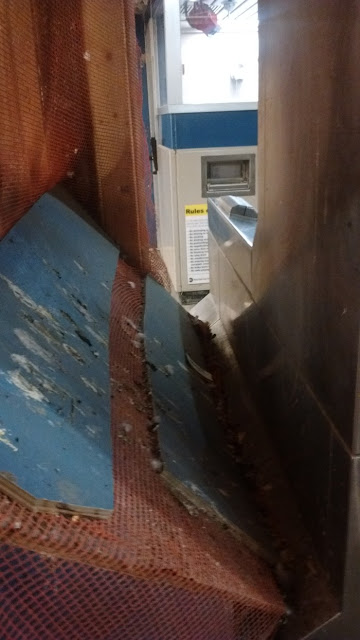 Many thanks again, QC.

Check out the comp of pics at the end of the post, that's just a small percentage of pics I took from 6 months.

Where is PIX's Greg Mocker, the supposed subway correspondent?

The Chinese, Japanese, and Germans would have had this project completed in no time....and under budget.

Observe how slow and casual the workers are. Is it any wonder it has taken over 10 years to refurbish the Liberty AV stations in Oz Pk and Rich Hill?

You seen actual workers? Like people? I have seen only 3 instances when there was an actual crew there. Last time it was only three on the barricaded staircase a month ago.

JQ I was only up there 2 weeks ago and made my observation.

Typical NYC total bullshit. With the exception of Detroit (and that had to do with the auto industry), NYC is the worst city in this country with EVERYTHING, subway, streets, sidewalks, garbage, homeless, green space, quality of life. A complete utter mess. Even Broadway sucks, I mean a revival of Cats, one of the worst musicals ever.

And of course Queens is just pathetic, but then look at the so-called leadership in this borough. And it doesn't help outside of Bronx, the worst residents around, pretty much just a third world shit hole.

If this was Astoria or Long island city this project woulf of been done ages ago.Its obvious they're taking their sweet time because they just want more money and the people in the neighborhood are too sheepish to do anything about it.

I assure you my shock is genuine, not to cast doubt on your sighting. I wonder how many contractors you saw that day.

This station, at least the damn stairs will not be done by the fall at this rate. One day there's going to be a brawl on that bottlenecked staircase.

Ha! When I saw the headline I thought you meant human poop, piles and smears of which I step around daily everywhere along the 4-5-6 lines in Manhattan. Be happy all that's pooping in Queens are the pigeons! Send Mayor Big Dope a thank you card for so far keeping the human poop out of your nabe.

Instead of cop bodycams, we should have subway surveillance cams. At least put enough cams in the stations so if you see someone with loudspeakers or filthy cargo the cops should get to the car they were seen entering.