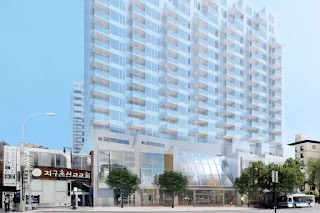 Now developer Xinyuan Real Estate will join the ranks of planning sorcery with its proposal for the former RKO Keith’s Theater in Flushing, a long-shuttered building by Thomas Lamb with partial interior landmark status. Xinyuan came in front of the Landmarks Preservation Commission on Tuesday morning to present its proposal to rehabilitate and preserve the 1928-built theater’s landmarked grand foyer and ticket lobby within a new glassy 16-floor building with 269 apartments. To the surprise of some, the proposal was approved on the first go-around.

Pei Cobb Freed & Partners, the firm founded by Pritzker Prize winner I.M. Pei, is the project architect while Ayon Studios have been tapped as the preservation architect.

Architectural drawings on file with Landmarks indicate that Xinyuan plans to use the existing ticket lobby and grand foyer as the entry for the residential building. An additional residential lobby, mail room, and elevator bank will be accessed past the landmarked interiors.

Floorplans included in the presentation also show that the building will have a sophisticated robot parking system, as condo developments these days do. Under the plan, the original theater that could once seat up to 3,000 and was not granted landmark status will be razed.

The interiors, largely neglected for the past 30 years, are worse for wear. Images from inside the building taken at different times after its 1984 landmarking show just how much the structure has fallen towards disrepair, with a partial collapse of the grand foyer’s ceiling and graffiti littered throughout.

As part of the site’s redevelopment, some of the existing plasterwork that depicts an asymmetrical Churrigueresque Spanish townscape will be removed and replaced, with other portions being salvaged and restored off site. Just about everything will require work, be it reconstruction or new paint.

The Municipal Arts Society has weighed in on the restoration, saying it believes “the new construction could be more sympathetic to the historic theater,” but endorsing the rehab nonetheless.

This proved to be the main point of contention among the LPC’s commissioners as well, at Tuesday’s meeting. While the ticket lobby will be accessible to the public as part of the retail space in the new development, the fate of the grand foyer beyond that has yet to be decided.
Posted by Queens Crapper at 5:08 AM

Reminds me of the Woolworth Building: interior preserved, no access. But the unit owners have a wonderful lobby!

So many years needed to come up with a crappy solution.

Finally gotten approval to do something to that eyesore... all the delays probably cause by idiotic protester saying they want to preserve the theather.. BS. when it's all rotten you still want to preserve it!? Government is not stupid. No point in preserving rotten crap when no profit is to be made. Rather have it build to something that is at least nice and modernize, else it's a waste of real estate.

I remember that place from years ago, saw the first Star Wars movie there, I loved every single minute of it. I recently saw The Force Awakens in a new multiplex, walked out and heard a drunk 18 year old rant about how the Force Awakens was the greatest thing he ever saw in his life. The young generation are a bunch of morons.
It looks like an Egyptian Pyramid today, totally abandoned but looked like it once had activity and life.

Drunk 18 year olds, yep and that why I no longer see movies in theaters.
The last movie I paid to see was Spaceballs and I almost ended up getting arrested. It was bad enough with rude annoying bastards back then, I cant imagine now.

Speaking of movies: These young generation are like the artsy bohemian devils in the "Mad Max" flicks. This country's future is in deep shit, in 15-20 years the Muslims or Asians are going to end up running and owning everything.

We suspect that the only purpose for the theater has been to launder money. The federal authorities have been notified regarding this.

Once more another "developer".
Will the property be flipped again or really "developed" this time?

Anonym-ASS #3.......
Preserving the theater is out of the question.
Preserving the landmarks portion(ticket lobby and grand foyer" is REQUIRED UNDER GOVERNMENT LAW".
Uh....learn to spell theater correctly, you troll!
"Delays caused by idiotic protester"?
It sounds like you are the mental midget here, sir.

From what seems to be circulating buzz on the international real estate line is that the present owner's company is not doing so well.
So, let's see if this will be another owner du jour who will resell the Keith's.
OR.... Will there be an "accident" during construction which destroys the landmark portions?
Hmmmmmm......another mystery is poised to flicker on its ghost silver screen.

Muslims and Asians? Country in deep shot?
Sounds like you have got ka ka for brains, you racist,

Actually there is a separate entrance for public view of the landmark portions and another one for the residents. That is required under the landmarks law, as I am told.
Maybe somebody made an error in their assumptions here that it will be isolated and encased. "Curbed" is not the final word in the accurate transmission of facts. In other words"fake news"!

If you insist on assigning blame, regarding the 30 years of neglect of this historic building, then Donald Manes and Claire Shulman bear the main responsibility.
Coupled , now, with a community board that really just wants it all to go away like a bad dream...who are the real culprits here?

Committee To Save The RKO Keith's Of Flushing Inc.
remains committed to seeing the landmark portions preserved.
At this point in time, including the ticket lobby and grand foyer into some kind of project , seems to be the the only option left.
Remember this. We were fighting for the entire theatre's preservation going back to the early 1980s.
That is no longer realistically possible. Under the municipal landmarks law, the landmark portions are required to be preserved.
We only hope that the Keith's current owner will follow the law and not turn out to be a disappointment like its previous owners.
Our position is that the landmarked lobby and foyer remain easily accessible to the public.

Who made it the "eyesore"?
Manes, Shulman and a bunch of lazy CB7 butt holes.
They just sat on their politically connected asses scratching their heads. Tsk, tsk , tsk. "What can we'd...as of right".
Chinese-Taiwanese decelopers call the shots here.
Politicians merely accept their campaign contributions since the days of Tommy Huang.
He spread money around like melting butter on toast.
And everyone was grateful that the Asians prevented Flushing from becoming a "people of color ghetto".

At least the architectural firm involved is world renown.
The design is ugly but their reputation for following through is noteworthy.
I.M. Pei was its principal figure.

Once again....is anybody at the "illustrious" community bored actually putting any proposals forward to improve infrastructure and transportation? Never! Only nit picking traffic requirements. There has been too much money to be made here.
Social engineering and racial control is the keynote factor in Flushing.
"Keep those darkies contained elswhere" is the real (not so hidden) purpose of local government.
Former state assemblyman Morton C. Hillman:
"Thank God for the Asians. We don't want to see Flushing become a south Jamaica".
I rest my case!

Although preserving the Keith's lobby is a noble idea, it is probably not worth the trouble at this point. What's left of the lobby is almost completely deteriorated, and there is very little information left to guide a restoration other than a few old photographs, as the original blueprints are not available. Even so, it could not even begin to convey the awesomeness of the theater itself. I go back to the days before it was divided into a triplex when there was a balcony, loge, and a stage that harked back to its vaudeville beginnings. Were it possible, I would want to see the entire theater restored to its former glory, where it could be used for live shows, much like the restoration of Flushing Town Hall. What's more, the current population does not care one whit about Flushing's history. I was heartened when the Bowne house was declared a city landmark; you could just picture the Asian developers salivating at the thought of tearing it down to build an ugly edifice with a thousand rat-hole apartments. But sadly, I think the RKO Keith's is destined to fade into history much like its predecessor, the Flushing Hotel, which once stood on the same site.

Nelson, you are misinformed.
Besides, the LPC requires the ticket lobby and grand foyer's restoration. That is the law, regardless of your opinion.
Yes, it would have been nice to have the full theatre as it was. It will never be.
Even though a fragment would be a booby prize, it is worth having.

Unfortunately this has been going in for so long that I believe they are just waiting for those of us that care about the preservation value of the RKO to die.
Then they can plow the place down and build cubicle apartment/business units that fit in with the evolving culture that is infesting the area. Besides with the Marquee having been destroyed already preserving the lobby is a consolation prize.