Queens County Courthouse gets no respect 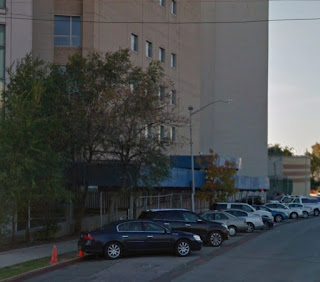 For over a decade, the sidewalk shedding around the Queens criminal courthouse has cost taxpayers hundreds of thousands of dollars — with no repair work being done to the building.

Queens District Attorney Richard Brown wrote a letter two years ago to the city's Department of Administrative Services (DCAS) requesting an answer as to why the structure was still surrounding the building.

“As a public servant, I am embarrassed and I can only imagine what phrases the public would use to describe the situation," Brown wrote.

Owners of buildings higher than six stories must comply with Local Law 11, which dates back to 1998, requiring an engineer to inspect the structures in order to determine necessary maintenance to protect the public.

Brown said that for more than 10 years his offices have looked like a construction site.

“We have endured more than enough of this eyesore. Repeatedly using this option, rather than making the necessary repairs to the buildings’ facade, is a waste of taxpayer money,” Brown told the Daily News.

The work required for the 61-year-old building is for minor repairs such as pointing, refastening of electrical conduits and repairing cracks, that as of this year have not been tended to, Brown said.

“Perhaps it is my outer-borough outlook, but I believe if this shedding surrounded City Hall or the courthouse at 60 Centre St. in Manhattan the result ... and timeline would be much different,” Brown said.
Posted by Queens Crapper at 1:45 AM

Queens District Attorney Richard Brown should realize by now, whenever the government is involved there is waste, abuse, and delays!!!

You don't like your work environment? Quit you loser.

Just another grab at taxpayer dollars.

Remember these are some of the clowns that support sanctuary cities and spend our tax dollars protecting and subsidizing illegal alien crooks.

So, Richard Brown is upset about the city's profligate, wanton waste? When did he wake up from his long term sleepwalk?!?

Let's start with the blighted money pit in Kew Gardens Plaza, better known as the former site of where 'Triumph Of Civic Virtue' used to be prominently displayed, where it was the ONLY public artwork that added beauty and softness to an otherwise ugly strip mall of nondescript stores on Queens Boulevard, where the statue (and its allegorical symbolism of virtue emerging over corruption and vice, bothered no one!)

The absurd cost of evicting by crane, a pricess, 16-ton marble statue like Civic Virtue by Helen Marshall, on December 15, 2012 was $200,000 of publicly unauthorized tax dollars. Worse, the PRESENT Borough Hall Czarina at the helm of all unconscionably wasted tax dollars, Melinda Katz, followed through with a 'rehatched' plan by her predecessor to not only evict Civic Virtue, but to include Katz's OWN repurposing of the now blighted plaza site, by spending an ADDITIONAL $920,000 that the Department of Citywide Administrative Services (DCAS) approved (again, without public due process and Community Board 9 consent), to turn Civic Virtue's perfectly working fountain base into a 'planted ruin' (that no one ever said that they wanted, much less was asked), ostensibly to beautify the plaza (ironically, a plaza that both Marshall and Katz themselves blighted), but the REAL reason was to pay tribute to the women of Queens politics that not a single taxpayer was ever asked if it likewise wanted.

Hey, Dick: We, The People want our beloved statue returned to Kew Gardens Plaza, in the SAME restored condition that it took a most 'odd-and-costly,' publicly unauthorized move and detour to Green-Wood Cemetery in order for a simple cleaning/restoration to be completed by those two empowered-and-failed, empowered idiots inside of Borough Hall, to justify their OWN bloated budgets of obscene waste and mismanagement (as they continually disobeyed their budgetary mandates for years, to clean and repair Civic Virtue when it was still on display in Kew Gardens)!

Finally, you simply can't make totally preventable tragedies like this up, fellow Crappers! So, you want to investigage profound waste and mismanagement, Mr. District Attorney? Step outside of your office's cushy corridors, and bypass the courthouse altogether, and sic your crackerjack, city bloodhounds on Borough Hall and Kew Gardens Plaza, where the REAL waste, mismanagement and dysfunction live (and always HAVE lived!)——they are BOTH glaring money pits without a bottom——and, the public be damned (again and STILL)!

As usual, the wrong people are reading this post. Never the ones who betray public trust with impunity, and that's why everyone else is taking matters into their own hands (i.e., violence, lawlessness, vigilantism and outright anarchy in the streets). And, it's all because of government tyranny at the top.

Whatever happened to American freedom and democracy?