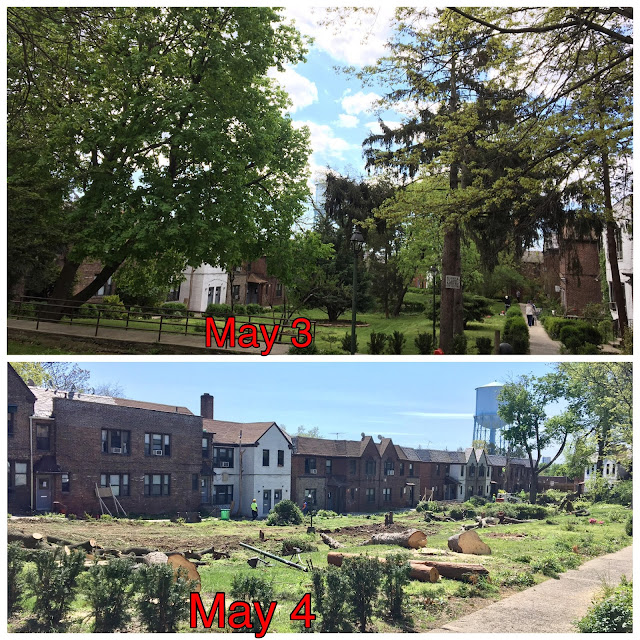 This is what the management company did to the tenants of a garden apartments in Kew Gardens, without a word. The residents awoke to the sounds of chainsaws and they are in shock and can’t really believe it happened. Mature trees that were there for many years and provided a beautiful green space for the residents including the birds and squirrels were gone in a day.

Unfortunately, any nestlings in those trees who could not yet fly were most likely destroyed even though some of them fall under the protection of the Migratory Bird Treaty Act of 1918. You may want to contact your local congress person. - QC 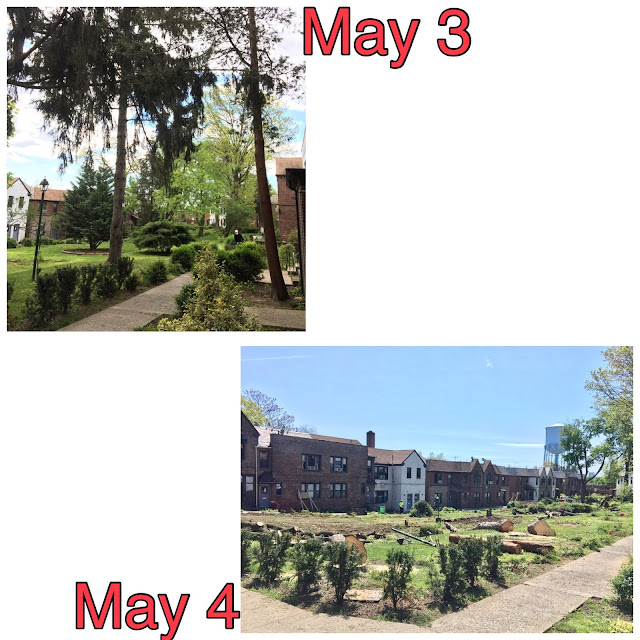 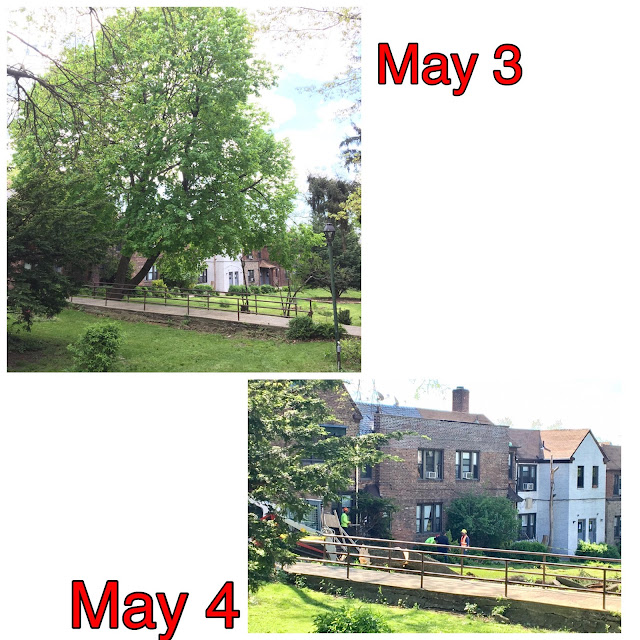 Posted by Queens Crapper at 1:04 AM

There is something they can do - fire the management company.

While they're at it, sue them too.

Yes, a lot of times to get cheap insurance you cant have trees.
Even with private homes more and more insurance company's don't want any branches near the house or near the sidewalk. To many people are getting desperate staging accidents, the "got poked in the eye walking" is the top one---lots of off the boat people & immigrant lawyers pulling this shit.

do the owners have permits to build new apartments in all that "empty" space ?

Nextgen comes to Kew Gardens. Looks like the city found some unused land for the predator developers via arborcide.

It strains credibility that your mgmt. company did this without board approval, except for the off chance they were given a general landscaping budget and went batty with it, in which case yoy MIGHT have a suit, but I am betting your board was either lazy and signed off on it without reading or came up with the idea themselves because you have a few rogue busybody members who never get challenged for the seat.

Most of the prior trees were deciduous. The new trees will be evergreens. They will save on maintenance.

Check the homeowners or condo agreement. They likely have the right to change what they like with little or no approval. The management company unlikely would do that on its own. Someone running that complex was behind this. What benefit would the management company have?

What is the address of this place? Was it built with a variance?? Does anyone know of a restriction to keep green space??

There was a plan for a garden. Whose plan? Who signed off on it?

Lots of people don't get involved in their local community and then complain when something happens they don't like.

Some even write a blog about it.

We had the same in Kew Village Estates development (KGH) last fall. A whole bunch of trees were cut down. Most of them were probably sick or dead anyway, but it was weeks before the management let us know it was for insurance purposes. Management policy anyway is to leave us in the dark as much as possible
We're now left with a pile of sawed up tree parts & wood chippings that were left on the property, more than 6 months later. The tree stumps are still sitting there which must be more of an insurance liability than the dying trees.

'Some even write a blog about it.'

I apologize. I wrote this quickly while at work. I should have written: Some even complain on a blog about it.

>staging accidents, the "got poked in the eye walking" is the top one

People sue - and win - for literally not looking where they're walking?!?

According to DNA, it's a rental complex. I rescind my earlier Board statement.

most of the S.E.Asian homeowners on my Bayside blk have downed the trees &concreted the ground around the house.

The 2 fams(no longer legally zoned)only park 1 car in drive way(built for 3 ,plus garage.choose to park in front of house @entrance of house.

garages are living spaces ,as well as basements. some are fire traps.D.O.B.impotent.

well, we say we mind, but if we really minded the wanton destruction of our beautiful landscape and the utter disrespect for the residents of this neighborhood, we would not say "the managing agent". We would say the names of the men who ordered this offense. We would say their names and we would find their addresses and post them. We would find their private phone numbers and post them. But they knew we wouldnt mind. They are wolves and they know we are sheep.

""People sue - and win - for literally not looking where they're walking?""
Yes and deliberately walking into them scratching their own face and eyes also.
Its a free $20K -100K, they then go home to Mexico build a dream house and retire for life.
Out in Long Island day illegal labor are shredding their own hands & fingers to sue the boss & homeowners so they can make a quick fast $20k or so settlement (worth near a million in Mexico & Guatemalan money. They go home as millionaires by Puebla Mexico standards

TREES ARE THE ENEMY!

The cost value of trees. By their gross indifference and ignorance little did the did the management company realize that trees all carry a monetary value. And that the monetary value plays significantly to the benefits and services that the trees provide as well as the value or cost it takes to replace them.

Looking at the size and stature of these specimen trees although not knowing anything about their condition the cost value to the property may run as high $ 1 million +. Why would you cut and remove a million dollars worth of tree assets on your property. Trees can increase property values by as much as 10-15% not to include the energy savings by the shade they provide during high temperatures. Good luck with this summers cooling bill..

I just left my apartment in Harlem to look ahead and see the same thing!!! There are squirrels frantically running around and it breaks my heart!!! They've destroyed their homes, the suppliers of air recycling, and shade on very hot summer days. I've live in this area more than 35 years. Those trees were much older than I am!!!