Mayor de Blasio sent his spokeswoman, Aja Worthy-Davis, to a joint protest by multiple civic groups in Sunset Park against his homeless policies. She followed the protesters around from hotel to hotel (they visited 4 all together) and live tweeted the event.


This man just called "putting homeless in the community....'harassment'" pic.twitter.com/jiSKiTTNR6

Delvis Valdes called Aja Worthy-Davis out for not using his name in her tweet. 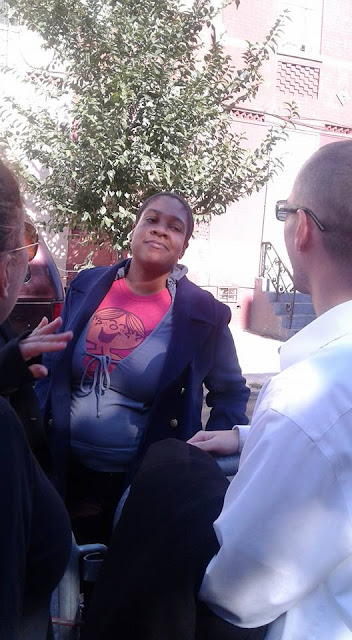 Protesters then got really worked up and told her off.

Robert Holden reveals that the city tried to deny a sound permit for the event until renowned civil rights attorney Norman Siegel intervened.

Phil Wong from Elmhurst United charged that the homeless crisis is intentional.

Michael D.D. White, a well-respected urban planner, who authors Noticing New York and is leading Citizens Defending Libraries, had a lot to say about "following the money".

Ramon Acevedo, member of Brooklyn CB7, called for an investigation into the administration and those profiteering off the homeless.

After the protest in Sunset Park was over, the group moved to Windsor Terrace to pay a second visit to DHS Commissioner Steve Banks.

By the way, Aja makes a pretty penny harassing protesters on Twitter.

Aja Worthy-Davis is harassing the protesters and getting paid for it !
Wake up and vote all incumbents out this November !
Your elected officials have sold you out to the "Dope" from Park Slope !

must be part of her job description to follow protesters around while they are peacefully protesting. Must be getting paid really well or compensated in some way to follow them. Tax payers once again foot the bill.
Hey she does not intimidate or harass me in anyway. She could stand there and text and tweet whatever she wants. Just tweet the truth and text it too!
How about you text,tweet and video tape the living conditions your bosses have these people living in?
This is America the last time I checked and we have the right to protest and do it peacefully.
If your bosses enjoy using the race card to divide our city it is a real shame! It was never about race.

100k to follow around peaceful protesters and throw shade at them online? Seriously?

That Aja woman is literally a professional and anatomically precise troll.

Why is she dressed like a bum? a cheap graphic Tee and an ill-fitting top? Is that the best a DeBlasio staffer can come up with???

Just what she wanted to do on her day off is to follow protesters around tweeting and texting.
Just tweet and text the truth.

Your tax dollars at work! Where is the public advocate? Why should our hard-earned dollars be spent on employing people like this?

Public Adovate a bogus job. Remember when deBlasio was public adovate. What did he do?
What do any of them do but take our hard earned money and look good in suits!
Look at our QBP....where is she when this homeless hotel fiasco is happening? What is she waiting for? To happen in Forest Hills Gardens,Austin Street or Jamaica Estates? Then we will see the great Melinda.
No one thought Margaret Markey will be voted out but people will do realize when one by one is voted out of office. How will they stop this?
More false hopes and broken promises.
The revolution is beginning and better watch out because we are tired of being taken advantage of

Get the truth out and vote the bums out !

you know what De BigPussy did when he was public advocate? He was the developer's advocate. For Bruce Ratner's destruction of downtown Brooklyn and 2 decade plan to turn it into the opening scenes of Blade Runner.

It can be a useful position with the right moneyvation, er motivation.

It's already happening in Forest Hills. When they are kicked out of the hotels, they come to Austin Street to beg. There have been fights and altercations. One threatened one of the street food vendors, I heard, with a knife. It feels very unsafe to walk around there in the broad daylight because of all these troubled people who need help, not warehousing.

""city tried to deny a sound permit for the event""

Yep, that's EXACTLY what these bastards do and mostly why the media dare not upset the Mayor and his Marxist regime.
I with Curtis Sliwa or Sherriff Joe was mayor to flush all this progressive bullshit corruption making everybody miserable.

People need to Pray for Trump because 3 progressives get appointed to the Supreme court by Clinton II we and the Constitution and our lives are screwed.

And, speaking of public advocate vacuousness, JQ, 'The Dope From Park Slope' has got another husky, militant, empowered idiot (and bulldog of an unresponsive tyrant) installed as a manager in that useless, money draining, taxpayer funded debacle named Laura Acosta.

Don't ever visit this Nazi's bunker with any proof to support whatever case you may have against city government——she is trained to instantly remove anyone who's got a valid cause of action, as she refuses to even listen to someone speak! On a recent visit to this devil demon seed of Hitler, Acosta ordered both my mother and I to be escorted out of the building because she refused to listen and see my evidentiary proof. What a filthy disgrace of failed, gestapo government! She is a ruthless, predatory, unresponsive tyrant, just like her incompetent boss, Wilhelm de Assio!

Worse, her mostly minority (and poorly trained) staff is so dumb and disconnected, that trained monkeys could do the required work, competence and civility compared to these Affirmative Action slackers of epic fail!

It's a disgrace what is happening to city and state government. New York State itself is now governed by a Neo-Feudal, Neo-Fascist, Neo-Bolshevist and Neo-Liberal regime that actually works even harder to destroy good trade, coommerce——and all pretense of public trust, ethics, integrity, accountability and transparency——and replaced with total fear and paralysis that is FOISTED by a gestapo regime (whilst rewarding monstrous failure at the top for the higher ups), that reinforces why civil unrest and outright anarchy are the prevailing factors in our dangerous, treacherous, unpredictable, unstable streets where there is entrenched corruption and instability in City Hall and Albany in the first place!

You really need to read Alinsky before using him as a catch all boogeyman. If anything, Rules for Radicals would be a big help for the protesters.

It is intentional! Mario Cuomo released the homeless from the nuthouses to extort higher taxes from us and shame Reagan! Put them back in the nuthouses.