Increase in legislative pay is questionable 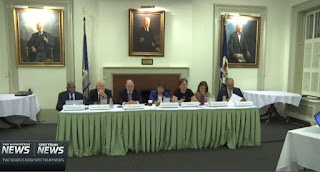 Governor Andrew Cuomo has made its clear that his appointees to the legislative pay commission can control whether or not state lawmakers receive a pay increase.

"You will need my appointees and judicial appointees to approve it," he said.

The Commission held several meetings this year and is expected to deliver its report in November, safely after state lawmakers stand for re-election.

But Assembly Speaker Carl Heastie says that was never part of the agreement. In a statement, Heastie says, "The idea behind the commission was to determine administrative, legislative and statewide elected salaries devoid of any political considerations or agendas. Unfortunately, counter to the purpose of the Commission, there are some who have tried to politicize this process by suggesting legislators testify or trade legislation for a pay increase."

Heastie went on to say Cuomo's budget director recently wrote a letter to the Commission explaining why an increase is necessary for his commissioners. Heastie says he, too, will write a letter on behalf of his legislators. which holds everyone to the same standard.
Posted by Queens Crapper at 6:02 AM

What? THIS IS NEW??? So was EVERY OTHER pay increse that relied on special commissions and a total failure to honor any pretense of public referendum. For more proof, just look at how former City Council Speaker, Czarina Christine Quinn ignored the public hearing rejections in 2009 for her (and the entire city council's) pay increase, and once the hearing ended, it was dishonest, politician-ordered business as usual! So, what's the point of having public referendum in the first place, if it's going to be ignored and outright rejected???

Likewise, the latest, 32% increase by 'The Dope From Park Slope,' dumb Blasio, who didn't even pretend to heed any edict for public referendum, unilaterally choosing instead to defer to a ❝special commission❞ panel that included an executive from Conde Nast Publications!!!

And, then not satisfied by this 'COUNTERFEIT' commission's publicly unauthorized recommendation, dumb Blasio 'the ultimate empowered idiot' increased the pay to an even HIGHER climb to 32% that NO ONE in the rank and file was ever asked if they EVER wanted for their ALREADY vastly overpaid politicians (not public servants!), all of whom so completely betray all pretense of public trust, ethics, INTEGRITY, accountability and transparency, that they now DEVALUE all honesty itself——to pathologically traitorous and tyrannical effect!

And, that's why there IS no society when government tyranny and anarchy like this continues to be OPENLY PRACTICED WITHOUT CONSEQUENCE, whilst completely destroying flag, country and Constitution with a vengeful impunity that is unprecedented, to date——and, only getting worse (and more destructive and insidious!) by the hour!

❝It is never good to be right when government is wrong.❞ ——Voltaire

They'll be getting their raises anyway, regardless of any protest.
I wasted 20 grand on my college education.
I should have become a politician instead of a nurse.

In the 1970s they were part time. Why should they be full time? SO they can spend more of our money? The less time they are there, the less money they spend. We should charge them, not pay them!

YOu should have gone to a real school.
Any college with state legislators on the board is a degree mill,
designed to rip of their own bureaucrats.