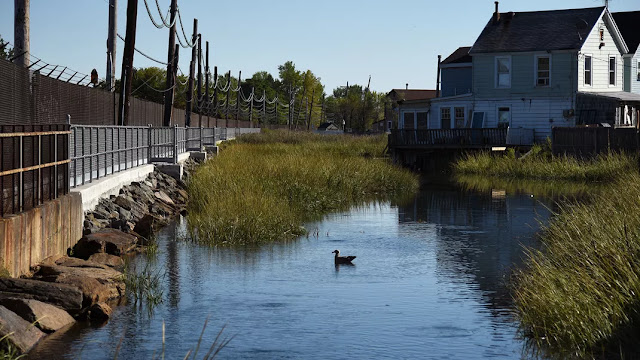 Another great photo essay by Nathan Kensinger on Curbed:

Down at the edge of Jamaica Bay, beneath the subway tracks and next to the airport, flows one of the most-seen but least-known creeks in New York City. It meanders past 100-year-old boat clubs and bungalows, travels underneath the AirTrain and the A train, and is the main reason that most of the nearby communities exist.

But to millions of visitors who look out over its waters while on their way to JFK, it has no name. And for many of the residents who live along its shoreline, its path remains a mystery, though its waters flood their streets during nearly every full moon.

This is Hawtree Creek, which passes through a pocket of New York City that feels like it belongs to a different century. Families living near this waterway still take "the boardwalk into town" like their grandparents once did, still keep a boat or two in the dock out back, and still navigate gravel roads through marshlands to get to their homes, which are built on pilings out over the water.
Posted by Queens Crapper at 12:57 AM

Wait until some developer finds a way to make this bucholic treasure pay off big for him.
Maybe not in the immediate future, but eventually. I hope not. Fight to preserve this, folks!
Meanwhile I am enjoying this beautiful photo of a setting that is truly G-d's country....unspoiled and peaceful.
Yes, who would ever think this is NYC in 2016. Sigh!

Don't worry I'm sure mayor didumbo is planning to build affordable housing there.

I just thought of a good use for Hawtree Creek——it makes for a good place to dump the bodies of the endless walking corpses currently serving on all worthless community boards——the bane of our vanishing society!

Then, once the mission is completed (and if there is still any room left in the canal), we can then move on to dumping the entire city council and council speaker there, along with 'The Dope From Park Slope,' dumb Blasio himself! And, since no one in city government actually works for a living (despite how they are vastly overpaid for taxation without representation), they won't ever be missed in the first place! That, or impeachment forthwith!

Due to new government flood maps, all structures will be required to be built on twenty five foot stilts...

This is the second story on Hawtree in a week, while they're enjoyable reads, it's quite peculiar that their is sudden interest in this sleepy burg. Probably a little runoff from indie film types interest in Jamaica Bay?

What about Hawtree Creek road in south ozone park and richmond hill? could it be a one of those hidden waters?

Anon no. 3: But what do you think about the article that was posted?

Anon number 3 why would you poison this beautiful, gorgeous, quiet creek?

You are right, they will not be missed.

Treat them to an all expense paid cruise, one of those fancy gambling boats. One at at time of course. And what can you do? Bad things happen at sea.

If you can't get behind that, make them live in the lovely motel/hotels they like to dump the shell shocked homeless into.