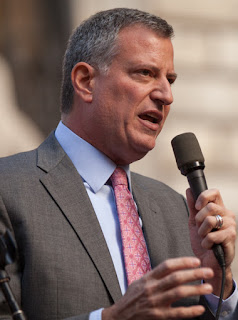 They’ve had three years, but auditors for the city’s Campaign Finance Board still haven’t completed a review of Mayor de Blasio’s 2013 campaign.

“That they have not done this yet indicates there are unresolved issues and problems with the campaign’s spending of taxpayer dollars,” Dadey said.

“The public needs to know what, if any, issues there were with the campaign’s handling of its finances.”

Audits are supposed to be completed within 18 months.

But campaigns often request — and are granted — extensions.

The CFB declined to say whether de Blasio 2013 asked for such and extension and the campaign didn’t respond to an email.

Oh yeah, its going to get a lot worse because people like DeBlazio want to see America completely destroyed. Those so everybody is forced on the government dole for life.
Obama just did away with ICE and the border patrol and detention. Tens of thousands are flooding to New York and others citys that receive big $$$ federal funding to house them under this "resettlement plan" (Clinton wants to remove the border, vetting and background check all together and give these people voting rights and free healthcare.

Did John Liu ever pay the $600K penalty, or did he settle with Campaign Finance?

City Hall is now a total scourge of public corruption and government tyranny, exactly like Governor Andrew Cuomo's hyper-corrupt 'House of Cards' that has ALREADY destroyed all quality of life, livelihoods and peace of mind for the rank and file and working classes of New York State.

What Wilhelm dumb Assio has horrifyingly FOISTED onto ALL city residents is an exact replica of the anarchist terrors of Nazi Germany, and this empowered idiot's legacy will be one of total corruption, pandemonium and anarchy, just like the legacy of another disgraced, corporate fascist owned puppet named Barack 'O-BOMB-A!'

Even God can't help our ravaged-and-tonsured flag, country and Constitution, when the evil is so entrenched like it is right now (and always HAS been)!

Speaking of which what ever happened to the hundreds of thousands of dollars in fines that were assessed against the campaign of John Liu?

I realize he filed and appeal but for crying out loud how many decades is this (exceptionally simple case) supposed to take?

To the Anonymous who is waiting for punishment to prevail against crooked John Liu——that's for your NEXT life to see, because you won't be seeing any pretense of justice before the end of your CURRENT natural life span, especially given that there are bigger (and more voracious, OPENLY PRACTICING criminal sociopaths/psychopaths), all of whom have been rewarded for montstrous political fail (i.e., Andrew Cuomo, Sheldon Silver, Dean Skelos & Son, Joseph Addabbo, Assemblyman Michael Miller——and a police blotter of too many Albany criminals and beyond to name)!

This is how government DOESN'T work: It's 'Delay, Deny——And, Hope That You Die' (where people actually HAVE died)! Then, it's back to the political mantra, credo and edict that their corporate fascist masters enshrine (to highest, sacred effect): 'Don't Blow MY Scam——And, I Won't Blow YOURS!'

Worse, THIS is the vile, vapid and vacuous loop that We the SHEEPLE have sadistically tolerated and accepted for decades, and without without any consequences for the subhuman politicians (not public servants), who've all created such unconscionable human misery for everyone else in the first place!

To the person who responded to my post about the son-of-a-bank-thief John Liu.

Yup, you're right, except when one of these scumbags is "accidentally" wounded the rest of the herd trample them so that the wolves don't eat them.

I am hoping for that outcome.

Taking a page from candidate Don Worthless' refusal to release his tax files.

What a sedated doofus we have at Gracie Mansion.
Uppers and downers are Duh Blaz's meds.