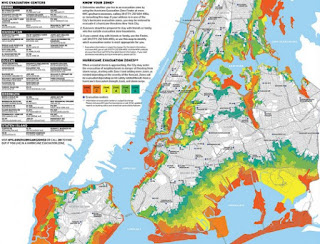 Federal officials have agreed to amend New York City's flood maps a year after the de Blasio administration filed an appeal on the grounds the charts were too pessimistic.

The new maps will likely shrink the boundaries that dictate who must purchase flood insurance, and may prescribe lower flood elevations, which would save some building owners money in flood-insurance premiums.

"Our city needs precise flood maps that reflect real risks, both today and years from now—and we have to do that fairly," Mayor Bill de Blasio said in a statement.

Flood insurance is required for any homeowner in a flood zone with a federally backed mortgage, but for decades the government subsidized premiums, which came back to haunt the National Flood Insurance Program after payouts from a series of catastrophic storms depleted its cash reserves.
Posted by Queens Crapper at 12:18 AM

Sure, but this will truly benefit the predator developers for more irresponsible tower building by the waters.

Even the feds are down with the gentrification industrial complex. Safety and security be damned.

These flood zones don't matter at the end, it's just all a way for insurance to get more money out of you and then refuse to pay you when a huge storm hits calling it a tropical storm and not a full blown hurricane and in your contract it states "hurricane coverage only". It's just all crap.

Very expensive insurance and if it should happen again will the people really get their money quickly or more of the run around?

If you are a home owner, in an at risk area, you need to do your homework.

Glad they changed those maps, I'm sure Mother Nature will consult them next time she decides to send a storm.

Yes, maybe "too pessimistic for waterfront developers, so an adjustment is made to accommodate developers who heavily contribute to political campaigns.
Buyer beware! It's always been that way and will remain so.

If you have to carry flood insurance that means that your home is in danger and is probably worth less than one that is not.


>> flood insurance is a Huge Rip Off mean

Flood insurance is high because when something happens that requires you to use the flood insurance, most likely hundreds of other homes were flooded as well. If there is a flood, an entire neighborhood can be flooded.

Unlike, for example, someone leaving the oven on and burning the house down. You have a fire alarm to warn you and it only effects your home (mostly) and it's preventable.

If you are a home owner, in an at risk area, you need to do your homework.

And those who did got screwed because the insurance companies refused to pay because it was not technically a "hurricane"....Obama made the insurance companies pay for it. He had to get on them and order them to pay.smh...what a country. We can fund other countries but when it comes to our own citizens, we don't see aid for many years after a disaster hits. This country should be ashamed of themselves.

I have an analogy regarding this, if I can crudely describe this, as a remixing of the fed's flood maps.

In Austraila, there was once one of the wonders of the world that attracted a lot of tourism, the Great Barrier Reef. In the past few years, it had lost of lot of marine life and color because of the extreme effects of climate change caused by rapacious energy companies and obsolescent elected officials, but to maintain and continue it as a tourist attraction, government officials there did some creative finagling and spin to keep it so. Although it was declared dead by a group of scientists last week, there have been other scientists to debunk that claim, but they are still in universal agreement that it doesn't have much longer to go.

This is kind of like what the feds did here. But probably induced by a lot of lobbying by REBNY and the agents of the city. Because this city now has and are building more parks on barges, excessive waterfront development, beach foodie attractions and prospective hotel development, and a delusional plan to remake Red Hook into a one city utopia complete with towers, parks and a train line extension.

What's truly bizarre is that this is also on the heels by De Faustio decision to transfer 500 million dollars from flood and enviromental protection to the build it back program, which does not guarantee that these houses will get done.

This type of thinking must have Einstein doing somersaults in his grave. Making mistakes perpetually expecting different or even positive results has now become policy.

All this for fucking money.

Can you link to the specific scenario you are referring to?


Blame the people who didn't have insurance that got us in this mess.
>>Scam like obamacare.

Being an expert in flood insurance let me explain the purpose of expanding flood zones,READY,the low income home owners in Louisiana can not afford flood insurance and after Katrina FEMA did not have the money to rebuild Their homes so more people are needed in flood zones to provide revenue so Flood Zones Need to be Expanded,most will never have a flood and and FEMA knows it, Put Simply Flood Insurance is a bogus TAX.


What is with all the out of place capital letters and the lack of periods after sentences?

In response to Anonymous who said to "... an expert in flood insurance..."

"What is with all the out of place capital letters and the lack of periods after sentences?"
Answer: This is common format in boilerplate insurance and legal documents. Since he is an expert and can read these documents as easily as we read newspapers, it naturally crept into his writing.

In spite of the "out of place capital letters and lack of periods ..." he did us all a favor by explaining how the government again, under guise of protecting the ordinary citizen, actually put it's hands into our pockets and picked them -- again.

He says: "Put Simply Flood Insurance is a bogus TAX."

A tax, like Obamacare, that the government will look us in the eye and lie under Oath that it is not a TAX and it is for our protection. And, since it is law, we have to capitulate or suffer an additional monetary penalty.

Too bad Hillary is not Nationwide on our side. I wonder if Trey Gowdy could help us?

What is with all the out of place capital letters and the lack of periods after sentences?

I have lived in my home for 25 years,raised my kids in this home,never had any sort of flood or ever made a homeowner claim against my insurance company,recently received a FEMA letter that says my home will be in an extended flood zone?,flood insurance will be mandatory if approved WTF? I can't fight it if it goes through,its time to sell before my home value drops because FEMA is broke,mismanaged and corrupt
What sad times we live in when the only thing government gets done is separating me and my family from my savings.it has to stop.