Crowley actually knew about Maspeth shelter plan in MAY, said nothing 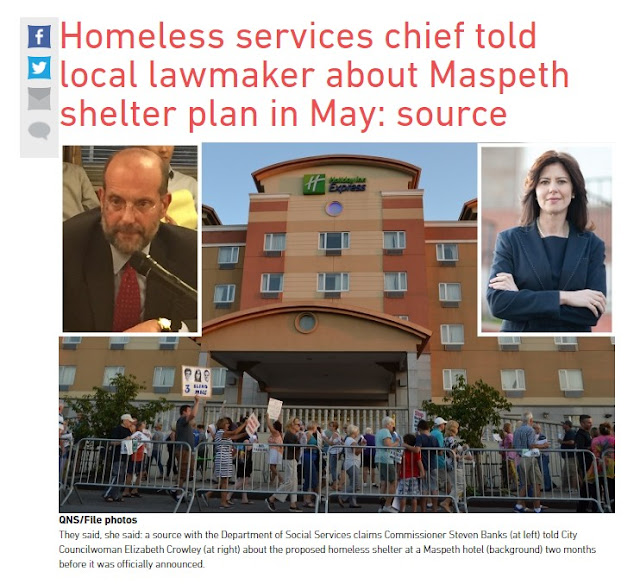 City Social Services Commissioner Steven Banks informed City Councilwoman Elizabeth Crowley about the proposed homeless shelter in Maspeth more than two months before it was officially announced, according to a source with the Department of Social Services (DSS).

The source told QNS on Thursday that Banks and Crowley exchanged phone calls “several times before the Aug. 3 community meeting” at the Maspeth library, where city officials announced plans to convert the Holiday Inn Express on 55th Road into a homeless shelter for up to 220 adults. Earlier this month, the city ultimately halted that plan and instead rented hotel rooms to indefinitely house 30 homeless men.

The earliest Crowley knew about the shelter plan, according to the DSS source, was in May at an initial meeting between Crowley and Banks. They had met on May 19 at Crowley’s legislative office in Manhattan and “subsequently had a number of additional, detailed in-person and telephone conversations” about the proposal. QNS has requested from DSS any recordings taken of those conversations.

“At the May 19 meeting, Department of Social Services Commissioner Steven Banks informed Council Member Crowley that there were plans by a nonprofit service provider to convert the Holiday Inn in Maspeth from a commercial hotel into a homeless shelter for adult families, and that there was an urgent need for additional shelter capacity immediately,” the source said.

Thank you for clarifying, QNS!
Posted by Queens Crapper at 6:44 AM

The "brain" of Elizabeth Crowley said...

I hope the dopey voters won't find out. Where's my paycheck?

The lady doth protest too much (now that it's expedient to)

Great intrepid reporting QNS, for a while I thought it was mostly p.r. copy for the gentrification industrial complex.

I know you are not surprised now about the sentiment of your community. It makes a lot of sense why you were not at one protest or rally.
Do you really think you will be voted back in? It maybe next year but people will not forget this.
We need a change with our politicians that represent this community. It will be coming.

This proves that you can't trust this crook or her cousin, don't ever vote for the democraps again, and make sure to vote Trump this November

"Great intrepid reporting QNS, for a while I thought it was mostly p.r. copy for the gentrification industrial complex."

It is. And someone in the Crowley camp must have pissed them off, considering their vehement defense of Crowley when it was suggested that she made a deal to place a shelter in Maspeth in order to spare Glendale.

Elizabeth Crowley never cared about Maspeth so why is anyone surprised that she sold us out? She's the worst Councilperson by far.

Did the local press finally wake up to this incompetent bimbo Dizzy Lizzy Crowley? We'll see.

This situation shows how funny people are. These protesters believe what the want to believe. Of course she's had communication with Banks news flash they still want the Glendale shelter that she's fighting.

Sadly, this is standard operating procedure for 'Dizzy Lizzy.' Now, didn't she pull the same clueless schtick of 'See No Evil, Hear No Evil and Speak No Evil, when she pretended to be an advocate for 'Triumph of Civic Virtue,' that statue that was evicted from Kew Gardens Plaza by former BP Helen Marshall (at a publicly unauthorized, taxpayer-funded cost of more than $200,000), only to have Melinda Katz spend an ADDITIONAL $920,000 to beautify a perfectly fine plaza that they themselves blighted (and without any pretense of due process and Community Board 9 approvals, no less)?

Back when the statue was still in Kew Gardens residence, she stood next to another slug, Peter Vallone, Jr., during a phony press conference on Saturday, December 8, 2012 (whose sudden interest in the statue was used to buttress Vallone's OWN dynastic run for borough president--but, not to worry folks: King Cuomo found this 'friendly robber' a cozy, phantom position in Albany's hijacked state government political liar's club of epic fail), where Crowley had the disinterested look of someone who was was late for her regular, Saturday 'lunch-and-a-manicure' appointments! Then, she disappeared into the ether, despite my repeated attempts to contact her office and the FOISTED lazy, arrogant Boston cronies who simply continued to 'Delay, Deny——And, Hope That You Die!'

What a counterfeit intellectual this dynastic crony of her 'Crazy Uncle Joe' is, and she proves it every day by leadership that has never led by example!

In fact, if we just eliminated HER position altogether (as well as the entire city council itself, and their vacuous 'Friends & Family' payroll), the savings alone to the languishing-and-overburdened NYC taxpayer would be tremendous, as cost efficiency and a system of fiscal sanity would finally prevail!

But, hey, who are we kidding here?? Fiscal sanity and THIS ravaged-and-corrupt de Blasio administration don't even belong in the same hemisphere, much less in the same sentence!

POLICY: SEND THEM ALL TO THE OUTER BOROUGHS SO THAT TOURISTS IN MANHATTAN DON'T HAVE TO SEE THEM, BY 'THEM ' I MEAN THE CITY'S 60,000 HOMELESS. THIS IS NOT SMART POLICY. IT SHOULD COST DIBLASIO HIS REELECTION.

What a policy and deBlasio acts like he is helping the homeless where as he is Judy shuffling them along.
Make sure the outer boroughs have their fair share.
Before this clown gets booted out of office he will ruin nearly every community and no solutions for the homeless.

"I hope the dopey voters won't find out"

LOL, the dopey sheeple reward her and the whole dam pack of rats re-election. She pulled this same stealth ops shit with St. Saviors didn't she ? You would think people learned a lesson back then but clearly not.
I am no convinced all democrats are no dam good and operate the same way Im voting for Trump. There is no other choice.

Thanks for selling us out and for selling out our communities...you remember the ones you represent.
Many of the politicians do not live here. Some live out of NYC. They don't care what happens in their place of employment.
Only the ones who live here see what is happening and with this deal with it attitude and you have to get your fair share bs is crazy.
Liz Crowley and Markey you forgot where you came from. That is a shame because I won't forget who to vote for.

Makes no difference the end near pending Clinton elected.

Socialism on a massive scale, the government will be owed a good 65% of peoples homes due to a capital gains tax that will be retro 25+ years. How many parents and grandparents will owe 1/2 million dollars on that small Maspeth or Glendale house that cost $120,000 in 1980 ?

How many "refugees " will the government demand you take in to offset that tax if you cant pay ?
People that worked extra hard, made good investments or own nice things are in DEEP DEEP shit

You know who in the white house will also support this scam?

According to the Queens Weeklies the politicians are up in arms over this shelter issue.

I tell you according to their media sources they are simply OUTRAGED!

(Tho I venture for different reasons than you or I)

I bet most of these homeless people are transplants who can't afford the sky high rents they themselves helped to create. The idiots in the City Council just keep making matters worse by allowing developers to turn this city into a high rise overcrowded mess. They are corrupt and inept.