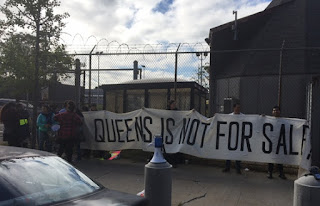 The event, held at Gantry Loft, was organized by QNS and included a number of panelists who were there to discuss the opportunities that are available within the borough’s residential, commercial and industrial real estate market.

The event was going as planned until one of the speakers was interrupted by the leader of a group called “Queens is Not for Sale.” The group claims that existing residents are being displaced by rapid development.

“We are here today because we represent the people of Queens that the Mayor’s affordable housing plan has left out,” the protester said. “We are domestic workers, fast food workers, taxi drivers, day laborers, seniors, among others.”

“Queens is being billed as the ‘new frontier,’” she said, adding that this ‘new frontier’ has been our home for many years. “This is about displacement.”

The protester was escorted out of the building and was joined by about 30 activists on Borden Avenue who were holding “Queens is Not for Sale” signs, who were also yelling out that message.

Ziggy Mintz, one of the protesters, said “the future of our neighborhoods are not being determined by the community but by the developers.”
Posted by Queens Crapper at 12:01 AM

"The answer my friend is blowing in the wind" - Bob Dylan

And the wind is indeed blowing. The first gust? When Joe Moretti's "comrade-in-arms" Pamela Hazel protested from the audience at Katz's State of the Borough this January about crap development in Jamaica. (Katz from the stage: "I work alone up here.")

Then the wind picked up speed with the Elmhurst and Maspeth homeless shelter protests.

And now this. Batten down the hatches the wind is blowing.

Was that Josh Schneps, Vicki's boychik, trying to put the kibosh on the scurrying protestor? Can we get a witness? (see the LIC Post video)

Who was that female cyborg with the vase bothering that spunky protester? (I think the better term is protector, re: North Dakota pipeline protest)

Also, why is a (alleged) weekly local news magazine, whose intent is to inform their readers, sponsoring yet another event extolling further upscale luxury development attended by elected officials that doesn't involve the town's citizens that they (allegedly) serve, with the disturbing and ignorant theme of frontier building? And who do these sociopath, soulless bankers and investors think they are, modern day Daniel Boones' and Lewis' And Clarks'? Or Buck Rogers or the starship Enterprise?

Because it's the Gentrification Industrial Complex, that's why. And with Mayor Big Slow still in command, they are for now are unstoppable.

Frontier? FUCK YOU. We have always been here. We will always be here, despite these demonic attempts to displace, no matter how you blandly misinterpret it has progress.

Despite their recent actions, actually reactions to vehement protests against the G.I,C's warped city planning of out of scale, rampant and toxic* development, selective parks improvements and street restructuring, which is like if Robert Moses and Jane Jacobs had a crack baby, and the gerrymandering of the homeless, criminal, mental, poor families and working poor individuals to what they consider undesirable and uninteresting to the hipshit market, Jimbrowski, Ms. Crowley, and the Queens Steamer glorified hostess greeter Katz has not learned a fucking thing and went back to their moneyed overlords to endorse this madness. One can only hope it will lead to their undoing and permanent unemployment in government.

Bu, bu, but where are all of the people moving to cities going to live unless we build more, more, more!!

Only a handful of comments?

Should caption this thread with craft beer and cheese expo to get hundreds.

The big question is how much abuse can people take before they wake up.

Fuck these craft beers and $40 a pound cheeses. I willing to offer yeunglings and goldfish crackers. And another relevant stanza

"cause finally the tables are starting to turn, talkin' bout a revolution"
Tracy Chapman

Schneps is what used to be called a carpetbagger. He doesn't live in Queens, but somehow wants to be King of Queens - the good part of Queens - western Queens - where there is lots and lots of waterfront. This man doesn't have any original ideas, all he does is steal ideas and copy what others are doing. Schneps inherited everything he has from hid daddy and granddaddy, but being in the publishing business doesn't satisfy his giant ego.

His flea market down in LIC simply sucks. He got a liquor license with the help of his little side-kick, Van Bramer. The restaurants and bars on Vernon are suffering, in large part due to the outrageous rents, and this little twerp is screwing them even more, first with food, and now with his pathetic "beer garden." For the life of me, I can't understand why the businesses on Vernon didn't organize against him.

Please boycott his stupid Flea Market and instead spend some money at the real brick and mortar establishments in the area. But that's too much to all of all the stupid yuppies and hipsters who took over LIC.

This owning 3 or more media outlets in one city (or market) is called MONOPOLY and is illegal. This is a very VERY bad thing!