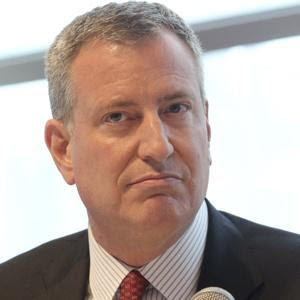 Ten days after Mayor de Blasio took a helicopter ride from Brooklyn to Queens, his office still refuses to explain what he was doing on that fateful Friday and why he needed to fly between boroughs.

The Daily News is calling on our readers to help solve the case of the airbound mayor. We're asking anyone who has any information to please email the News at nydntips@nydailynews.com.

His schedule isn’t much of a help.

Hizzoner had an 8:30 a.m. appearance at the Association for a Better New York breakfast in Midtown Manhattan, and called into a radio show at 10:30 a.m.

There’s nothing else on the schedule to explain why he was in Brooklyn and needed to take a chopper to his 6:30 p.m. speech at the opening of the New Electrical Industry Training Center in Long Island City.

His office won’t say what he was doing, except that he wasn’t at the Prospect Park YMCA, his favorite hangout, and that he was at a series of meetings in Brooklyn.

Why did he take a helicopter? Because he could.
Posted by Queens Crapper at 6:35 AM

Do as I say, not as I do. Tale of two cities. Inclusiveness. Progressive. Transparency. One NY. Hah! It's all a big lie.

Tale of 2 cities: busses that don't move, overcrowded trains and gridlocked roads for us but for the progressive savior, sky's the limit.

Another way of wasting taxpayers money and if you ran on time you would not need to use this source of transportation.
Any working person who would be constantly late at their job would be fired? Don't you agree Mr.Mayor?? How about the staff at City Hall? Do you have constant late comers? What do you do just look the other way? Disregard to those who come to work on time and have to pick up the slack for these people who obviously does not care about their job. There is no excuse for excessive lateness especially when you do not drive to these events you have a driver where as the little people have their cars or rely on the MTA. Bad example you show us.

He is coming out with his re Election bid for 2017. Can not wait to see this! Did not vote for him last time and you can forget about it this time around.
Can not wait to see who will be running against Mr Always Late! Abuser of taxpayer's money and disregard for communities.

His usual practice is to fly by night. LOL!
OR...we were sharing in his Ambien induced fantasy.
I have heard of him sleepwalking, but this takes the cake and taxpayers' money.
Who the fuck knows what is on this oddball mayor's...uh....disturbed mind.
Better increase your dose of Prozac, Bull.

Someone still has to beat him.

Look it's true. Bike lanes and pedestrian plazas do cause congestion and gridlock.

DIBLASIO SHOULD JOIN NEGAN'S GANG. MAYBE THAT WILL REHABILITATE HIM AND GIVE HIM SOME BALLS TO DO SHIT RIGHT AND NOT BACKWARDS!!

I believe in my heart that BDB has had an epiphany. He now realizes that there is no way he's going to get a second term. His attitude is "Fuck it, I'm gonna do what I want and fuck anyone who doesn't like it"... BTW Maspeth and Middle Village are going to pay for having the balls to confront the mayor on his failed brainless homeless policy. Witness the Bike Lanes going in on Eliot, Grand Avenues. He is going to do everything he can to make quality of life miserable for those who challenge him and his "Progressive" agenda...

There aren't enough derogatory words to describe this poor excuse for a man. You can only hope he doesn't get re elected and karma wins out and all the hardship he causes gets turned back on him. He's useless and shifty and lazy and that's being nice. He's petty and vindictive and childish. It amazes me that he's our mayor.

Is it to avoid the press, especially Dame Marcia Kramer?

Is it to avoid the men and women in blue finding time on their days off to vent righteous anger at the mayor and his indifference and condescension to them?

Is it from paranoia stemming from protests from constituents of towns he ignores and neglects?

Is it maybe that he has a nihilistic, cynical attitude and self-victimization defense, being part of this machine he was elected to, as duplicity and corruption is now embedded in government service. Exacerbated by the current awful reality of a serial perjurer or a lecherous swindler about to be elected president

Or maybe, just maybe, he's gotten to a point where he thinks the feds are trailing him and is using this mode to avoid them on the ground, like a role reversal from that scene in Goodfellas when Henry was trying to sell guns and coke with a chopper buzzing over him the entire time.

apologies to Marilyn McCoo and the Webb Brothers

But he made one helluva Public Advocate. (sarc)

Remember Vic Morrow ?? Mr DeBlasio hold your head high as you board your helicopter PLEASE!

Amazing how he forces the terrible "Vision Zero" plan on us that makes driving in the city even more frustrating and dangerous than it was before, while he gets to spend our tax dollars avoiding the very traffic jams he's created.

At this point, even van Bramer would be an improvement, if he'll revoke Vision Zero.

What does the majority leader Jimmy Van Bramer say? He was a big supporter of De Blaz and the Speaker?

Stuck with this piece of shlit for another decade, right?

No, it was an alien abduction, where he got orders from the bigger Big Bird. See: https://cdn.drawception.com/images/panels/2013/6-23/LEDZBEDacd-1.png

>Stuck with this piece of shlit for another decade, right?

He came to take a flying aerial dump on Queens.
Open up your umbrellas and head for cover.

--Emergency, Drug, Shrink or prescription deal/
This mayor may be on the verge of totally cracking up.

Something triggered a bad drug jones, had to meet a dealer ?
Remember this guy smokes so much dope his security detail often feel sick and ask to be relieved. Maybe pot & benzo's doesn't work for him anymore and he doesn't want to see a doctor only to have the press find out.
--Tell no one and fly out to Queens for a pickup it was an emergency