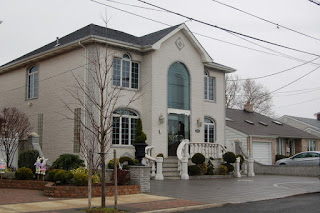 [The City] Council demolished a rule on Oct. 27 that lets Ridgites drastically enlarge their homes because people were taking advantage of so-called “special permits” to erect gaudy McMansions. The reversal is a win, because loophole abusers were tearing the neighborhood apart by building flashy digs that stuck out on otherwise idyllic blocks, one local leader said.

“A home is your biggest asset, and when you have someone who applies for a special permit and does not respect the character of the block, it pits neighbors against neighbors,” said Community Board 10 district manager Josephine Beckmann. “I am very happy that after many years of advocacy for its removal it’s finally completed.”

The permits were available to residents seeking to expand one- and two-family homes larger than zoning laws allow. The Department of City Planning created the permits so families could enlarge their homes as they had children — rather than having to move to a bigger house every time a new member joins the family.

The community board originally opted into the program 20 years ago believing that the city would ensure the expansions did not alter the neighborhood’s character, but the permits were frequently used for projects community leaders felt were inappropriate, said Beckmann.

“I think it was well-intended, but in time I think we realized that it really wasn’t being used as it was intended,” she said. “Now this protects community character and stops developers from using it to expand houses just because they can.”

Community Board 10 has tried to deep-six the special permits in the past, but the notion never gained traction. This go-around, Councilman Vincent Gentile (D–Bay Ridge) and the Department of City Planning helped the board draft an amendment to zoning law that would remove it from the special-permit program, and Gentile got his colleagues in Council to unanimously approve the measure.

We're liking this Gentile fellow!
Posted by Queens Crapper at 12:34 AM

Does this affect the entire city?

I am sure that there are loopholes, just like everything with government...

How about not being so freaking selfish and stop having so many god dammed children already.

Is it retroactive? Shouldn't those who built Gaudy McMansions Be required to restore their homes?

It is about time. These huge monsters do not need to be on a street with small quaint homes.
It's an eye sore abd sticks out in a rather modest community.
There is a huge house on my block and it's big outside but very small rooms inside with no backyard. It's all cement. The kitchen and living room in one with NO dining room and three small bedrooms. Not worth the money they paid for it.

Better late than never I guess... shutting the barn door after the pigs have already built them selves many McMansions!

i hate low-class who find money.

Don't get your hopes up. This will just be ignored.

Did you all see how the Clintons made major changes to the new property next door to their home with no permits?

Finally?
In Broadway Flushing a lot of homes can be torn down and still built to the maximum FAR under the law.
Most old 1920s homes are under built and can be replaced by Mc Mansions, which are proliferating by the dozens.
Mc Malba comes to Broadway. Forget about your landmark district. It will not be coming.
After Bloomberg, the possibility of a district was supposed to improve. Now there's De Blasio. No improvement.
Nor will there be with the next mayor.
And Paul Vallone sits there with his thumb up his ass, the real estate lobbyist that he is.
REBNY does not approve of landmarking. Nor does Vallone, despite feigning to do so.
Vote the bastard out! He has done nothing to protect the quality of life in his district, only to feed his fat campaign coffers with developers's money. Don Ciccio Vallone must go if our nabes are to survive.

They are not housing their own children there though. They are housing other families in these ugly mcmansions. So there is 3 or 4 families living in these homes. Statistics show that the average home only has 2 kids. My father raised us 2 kids in an attached home with only 2 bedrooms and a basement. So these idiots are really telling me that these people need that big of a house to fit 2 kids and 2 adults in it? GET REAL!!

"Anonymous said...
How about not being so freaking selfish and stop having so many god dammed children already.
Sunday, October 30, 2016"

LMAO! Are you for real?