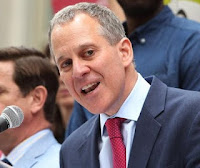 For many years I and many other residents of Queens have fought to protect the integrity of Flushing Meadows Corona Park as an urban park. We successfully defeated an attempt to construct around Meadow Lake in the park a Grand Prix racetrack. We were not successful in opposing the usurpation of parkland for the USTA stadiums and their expansions. We made it clear we would oppose any attempt to place in the park a soccer or hockey stadium.

There is currently pending before the New York State Court of Appeals, our highest state court, litigation that seeks to prevent the construction of a 1.4 million-square-foot shopping mall on the parking lot adjacent to the Citi Field stadium, on the grounds the lot is on land that is part of FMCP and there can be no alienation of parkland without New York State legislative approval and the Uniform Land Use Review Procedure before the community boards whose areas touch upon the park. The developers claim that with regard to use of the Citi Field parking lot they have no obligation to seek legislative approval nor any requirement to engage in the ULURP process. While we lost our case in the lower court, our attorney, John Low-Beer, was successful before the Appellate Division First Department in having the lower court reversed and construction of the mall prohibited. The developers then appealed to the Court of Appeals.

We recently became apprised of the fact that you as attorney general of New York State have injected yourself into the litigation and are submitting an amicus curiae brief in support of the developers and their projected mega mall. We find your 11th-hour entry into this litigation indeed strange, given that at no time while the issue was being debated before the public was there any participation by you or your office. As the attorney general we expect you to be the defender of the public trust doctrine as it relates to parkland. We are certain you are familiar that in the past the AG office has invoked the public trust doctrine in the cases of Friends of Van Cortlandt Park v. City of New York and Capruso v. Village of Kings Point. We fail to understand how you differentiate a mega mall on parkland from the cited cases.

We do not know if your initiative was prompted by yourself or as the result of lobbying from the developers or at the behest of Gov. Cuomo, who in the past has sought to settle the pending litigation and permit a mall. In this connection, we think it relevant and important to take note of the fact that, according to the Board of Elections’ website, Sterling Equities, Sterling Mets LP, Related Companies, Stephen M. Ross, Kara Ross, Jeff T. Blau and Lisa Blau — all related in various ways with the developers of the mall project — have contributed to election campaigns of both you and Cuomo a total of $187,300 since 2010. That is a large amount, which raises serious questions regarding the obligation of both you and the governor to protect the interests of your constituents and not that of billionaire real estate moguls.

Benjamin M. Haber
Flushing
Posted by Queens Crapper at 5:14 AM

Mr. Haber, I hope you're not waiting or expecting an honest answer or reply from a dishonest person

BTW....
that Grand Prix plan was a Donald Manes plan.

Since the Donald has passed, little has changed at Queens borough hall.
His apt protege, Claire Shulman, was at the helm when the USTA had their way with the park.
Helen Marshal stood by when other plans were offered to take more parkland.
Now we have the developers' courtesan, Melinda Katz , selling out the park and a lot of Queens to her developer handlers.

WISE UP! Borough hall has done the most to approve the overdevelopment and strain on our infrastructure.
Be EXTREMELY CAREFUL who you vote for.
The Manes legacy continues.

FYI...
the Shul-Manes administration allowed the historic RKO Keith's Flushing Theater to be brutalized and left in the sorry state it is in today.

Malls have become dinosaurs. 40 malls have closed over the last 5 years. Many more to come. They will not build a mall here. Unless they are complete idiots....and someone gets paid off.

Schneider is another tool for the Gentrification Industrial Complex.

I am dismayed by all the two-faced duplicitous hacks in the highest positions in this city and state. They are all owned, no matter what they say or the impressions they give in front of the press. It's really looking hopeless (but that doesn't mean no should stop fighting).

If there is any reason why Gov. Andy and The Blaz are still in office, look no further than this.

I am sure they see that the honest graft they are peddling, and that is now instituted as policy, is better for us and well, if the Koch brothers and their ilk can fund the campaigns of their chosen tools and the ALEC cabal can stick their scaly fingers and sick thoughts on legislation, then that justifies their self-righteous agenda. Cause they know it's for good for us. Like eating liver. Or purified urine.

As for this latest attempt at government and developer gang rape of public space, it's just another day at the office for these sociopaths.

I wonder what our local city councilman members have to say about this. ABSOLUTELY NOTHING !!

You need to integrate commercial concerns because it would be in their interest to call the cops and get involved to keep up the park. This was the big success of Bryant Park.

Benjamin M. Haber---a true voice of the people. Thank you!!!

Culture of corruption, from the head all the way down.

A vote for Clinton is a vote for more of the same.

What purpose does this guy have other than waste our tax money and lobby on behalf of developers?

1. You endlessly rehash the obvious with no course of action. THIS ACCOMPLISHES NOTHING!

2. You give advice on what some theoretical person should do. THIS ACCOMPLISHES NOTHING!

3. You tag you councilman as responsible, then take them off the hook. THIS ACCOMPLISHES NOTHING!

YOU NEED TO WRITE LETTERS TO THE MEDIA, SHOW UP AT PUBLIC EVENTS THEY ARE AT AND RELENTLESSLY QUESTION WHY THEY AND THE BOROUGH PRESIDENT ARE RESPONSIBLE FOR TAKING PARK LAND AWAY FROM KIDS AND GIVING IT TO DEVELOPERS!

Getting the word out accomplishes something. Making suggestions is advice. Repetition is good. There is good in repetition...

The comments here are letters to the media. Believe it or not, they are reading. Why else would the majority of the newshour focuses so much on twitter comments and viral videos.

As for showing up at these bogus and exclusive events they throw, they go to oppressive measures to keep everyone out and astroturf it with their sheeple base. And they deploy a phalanx of cops who certainly would rather to something else than prop up and protect these fauxgressive snobs. It's only purpose is to dissuade and discourage people from organizing, disenfranchising them/us from our right to peaceably assemble.


Although your list is inspirational and proactive, don't call anyone son, that's not right (RIP kevin meaney).

It is an old expression and was used, for example, in a Geico Commercial featuring Charlie Daniels.

All...FYI....the reason that Northeast Queens now has insane airplane noise is because of Claire 'fucking' Schulman.

This is why you don't vote these assholes into office...why you don't believe anything they say....
. . . .
You have to move beyond bitching in front of a computer and meeting with other people. Your leadership is old and tired with ideas from 1980 (they still believe in mailing and are totally clueless on the internet, for example).

Invite people from successful groups in Manhattan or Brooklyn to talk to your civic and see how it is done.

Well said Benjamin, thank you for all your thoughts and your actions against those who would destroy our park for profit.You have gone to the meetings,fought in city hall and marched in demos, keep up the good fight. Only an idiot would build a shopping mall in this park.Try driving around this area when there is a ball game or when the US Open is played,it's grid lock.People will stay away the mall,it will go broke and the developers will get billions in tax breaks.For all our local politicians who supported this mall, shame on you.We must stop this mall.

Hopefully Preet Bharara can look into this so called AG-s dealings also.
Preet single handedly did the work of other people, looks like the Witch is going down

Now Preet you can do more in NY, right?