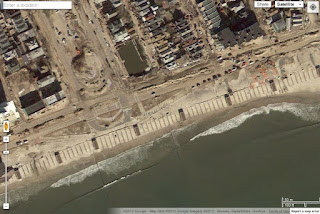 The low-income communities of the Lower East Side and the Rockaways both suffered extensive damage from Superstorm Sandy four years ago.

But advocates on the Lower East Side were able to engage more effectively in post-storm resiliency efforts than their counterparts in Queens because they already had a robust network of community activism in place from years of fighting gentrification, according to a recently published study from the John Jay College of Criminal Justice & the Graduate Center.

Researchers focused on the role of community organizations and being able to respond to the “climate change politics” of the city, which is increasingly important as the frequency of storms is expected to rise along with rising sea levels, noted Leigh Graham, John Jay environmental psychology professor and lead author of the study.

While both areas have high concentrations of public housing residents and low-income households, the Lower East Side’s pre-existing civic infrastructure of community based organizations and social services fighting against development pressures enabled residents to recover more quickly, according to researchers who spent six months interviewing community groups in the area and 18 months in the Rockaways.

The Rockaways, on the other hand, were at a disadvantage, not only because the area is more geographically isolated on the far edge of the city, but also because it’s more racially and economically segregated.

There’s a high concentration of poverty along the eastern part of the peninsula where the residents have suffered from decades of economic “malaise,” which in effect weakened and undermined their post-storm response, researchers found.

“The Lower East Side and the Rockaways had similar levels of exposure in terms of storm flooding,” Graham said, “but the Lower East Side groups were basically a partner in a lot of the resiliency efforts after the storm, in part because residents, who live there, have been fighting gentrification for 30 to 40 years and established a level of organization, trust and power, that they were able to get a seat at the table as important stakeholders.”

Community groups on the Rockaways did not have the same level of organization prior to the storm and remain more focused on meeting present economic needs than on pursing long-term resilience planning, she noted.
Posted by Queens Crapper at 6:06 AM

Many areas of the Rockaways have a very high republican turnout, regardless of civic associations.

The tale of two cities...

One comment? Oh people, this hits the nail on the head as why your borough is the backward stepchild of NYC.

Organizing on your own, without a politician to order things about is just about impossible for you to fathom.

When they walk into a room, you act like silly kids. When them mistreat you, you either throw up your hands and say its time to leave or you can't beat city hall, or, pathetically, you blame yourself.

When an issue comes up, you stand on the tape, and read the script they hand you so you can fill giddy and full or power and believe it when you snidely call you 'a player.'

When they put together a bogus civic, or committee, or task force, you believe every damn thing they tell you because its 'official so it must be true.'

And most sad, when someone stands up in the face of official ire and says something you all know is true, you trip them up in exchange for ice cream money and an official smile.

You are so cut off from the rest of the city you know squat.

Not pretty? Then damn it do something about it.

Who or what conglomerate ordered this study in the first place? And what is the point, is there a competition between communities reactions to tragic events. And why would a study on reaction to a devastating storm correlate with gentrification?

Maybe this is simplifying it and I'm not a paid analyst, but how is the devastation of the rockaways, which temporarily destroyed roads, destroyed a town, and turned a federal park into a garbage dump and landfill from Sandy, compare to the LES, which only experienced flooding of the streets and a temporary blackout?

This article has a condescending tone about it. I don't know how they came to the conclusion of the LES's fight against gentrification, when that area as seen as much lunatic tower development as the other waterfront areas in the city, so whatever fights they have had to prevent the overtaking of their towns have been in vain. Never mind the fact that there is still random crime from illicit drug dealing and gang violence going on unabated.

The comparison to Rockaway (what about red hook, staten island, coney island and gerristen beach?) only is very selective considering that there is also lunatic development speculation happening there now. For the reason not to improve the quality of life there or bring vibrancy to the beachfront, but because, despite the economic and cultural segregation there, it's an ideal place to build towers with lovely views of the atlantic and things like societal effects and the extreme effects of climate change don't matter when it comes to making bank on beach properties.


I get the sense that what the author of the DNA story is conveying here is that the area is not worth saving unless it's overdeveloped or in a way taken over by a conglomerate of wealthy oligarchs assembled as a non-profit to remake the beach as a true resort, say a "friends of the rockaway". There was an op-ed in the NY Times, I assume maybe by one of those gadabouts from the odious style section who suddenly declare towns trendy and hot, that basically said that the residents of the Rock should just sell their homes or move from their apts because the presence of climate change is too much of a threat to fight or make adjustments to improve secure surroundings against. And since what passes for journalism, print, media and digital is compromised, an extension of and basically p.r. copy monkeys for the gentrification industrial complex of government and real estate, this must be taken with equal seriousness and skepticism. But mostly disgust and anger.

This is starting to look like there is a major plan to turn rockaway into the hamptons.

Who did they interview in the Rockaways?

Looks like they are putting in the fix for the Rockaways. racially divided? then their solution is to force convicted felons and gang members on the west end. some solution. How about anyone with a more than three criminal convictions be banned from the entire peninsula? Send them to Park Slope. DeBlasio will welcome them. Let them live at the Park Slope Y.

these studies are not accurate, not scientific, based on opinions. The bogus studies are dragged out by politicians and used by non profits for fund raising grant proposals.

Classic Queens in the reaction of poster 3 and 4.

The study is at fault, Queens is somehow different so it merits a different treatment - well that IS true but not how you interpret it.

The problem is with the civic culture in Queens.

Talk to friends and fellow workers in Brooklyn or Manhattan and try to see the differences. Better, if you have a civic group, invite someone in from those areas and don't act stupid and self-righteous when they point out how you have been getting the short end of the stick for decades.

Stop depending on your politician their puppet media for information.

Try it. All you can lose is your chains.

Yea, Rockaways, ask someone from the LES to come for a talk.

>There was an op-ed in the NY Times, I assume maybe by one of those gadabouts from the odious style section who suddenly declare towns trendy and hot, that basically said that the residents of the Rock should just sell their homes or move from their apts because the presence of climate change is too much of a threat to fight or make adjustments to improve secure surroundings against.

Amazing. This must mark the first time in recent history the NY Times was against spending tax money on something.