People come from far and wide to our shelters 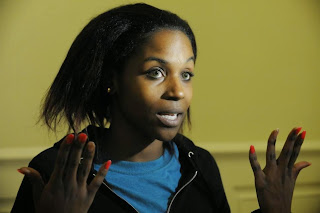 For Avora Williams, it hasn’t been easy seeking a safe haven in public housing to escape the physical abuse she says she suffered from her son’s father.

The number of domestic violence crimes at NYCHA has more than doubled from 809 in 2009 to 1,642 last year. That’s compared with a 25% spike citywide. The NYPD says the steady rise in domestic violence was a key factor in the alarming 31% spike in major crime at city Housing Authority developments over the past five years.

Williams, who’s raising her son while working full time, has come up short in her quest for adequate documentation to qualify.

Two years ago she got a protective order after several violent confrontations with her son’s father in Maine. After she moved to Pennsylvania, she says the harassment continued.

In July she moved to a city shelter for homeless families but says she’ll have to move out come New Year’s Eve. NYCHA says she doesn’t qualify because she needs to more adequately document the abuse.

Another domestic violence survivor, whose name was withheld, said she was an undocumented immigrant, and, therefore, didn’t qualify for NYCHA’s priority housing.

“I applied for NYCHA and I was denied because I did not have the documentation,” she said, bursting into tears. “I think if NYCHA made it easier to apply we wouldn’t be in these domestic violence situations for so long.”

So homeless shelters are full of people who aren't from here? I suppose maybe a residency requirement would help stop the gravy train and bring down the numbers of homeless seeking NYCHA placement, but we all know that no one has the backbone in our legislatures to make that happen.
Posted by Queens Crapper at 12:35 AM

This is so ridiculous. Why does NYC have to be the dumping ground for the world's homeless and poor? Just because we carry the statue of liberty in our harbor does not mean that we should be a dumping ground.

The city is not responsible for your stupidity Ms Avora Williams. You wanted to date and sleep with a "bad boy" who was probably a complete asshole who smacked you around. You liked it, stayed with him, and decided to have a kid with him.

The city's responsibility ends with prosecution of him for whatever crime committed against you. Nycha or the city is not responsible to house you because now you feel threatened. You chose to shack up with a violent moron. Now suffer the consequences and stop blaming nycha and the city. I do not feel sorry for you one bit for your stupidity.

No worries, I'm sure they have NYC ID cards and if the "NY is home act" goes anywhere in Albany they will be voting soon. They can vote in all the pandering politicians to give away what is left of the store. Ask your NYS candidates how they will vote and remember Election day is coming.

Two years ago she got a protective order after several violent confrontations with her son’s father in Maine. After she moved to Pennsylvania, she says the harassment continued. In July she moved to a city shelter for homeless families but says she’ll have to move out come New Year’s Eve. NYCHA says she doesn’t qualify because she needs to more adequately document the abuse. “I will have to consider moving back with my son’s father because I do not have family here,” she said. “My son’s father was extremely abusive. He was an alcoholic. It was a very scary situation. I don’t want my son growing up in that environment.”

Sanctuary City baby! Bring them all in! There's plenty for everyone!

So what other alternative do you have?

Letting them on the streets simply adds (literally) to the problem.

Give her and her kids lifetime exile on a work farm?

Letting them stay on the streets? Where does it say that either of them were ever on the streets? If we passed stringent requirements for shelter here, word would get back to the freeloaders in other states that the gravy train has stopped, and they'd stop coming. Why are NYC taxpayers footing the bill for non-residents to live in shelters and NYCHA housing? It makes no sense whatsoever.

Weeks ago there was a "rally" at the AMMI conducted by Poveromo. People came and vented, shrieked and hollered their heads off about the shelter by the GCP in Astoria Heights. Pols and panelists looked "concerned".

The dogs howl and bay and the caravan moves on.

So what other alternative do you have?

If you're sleeping on the street, you get picked up for vagrancy. If you don't have or refuse to show ID so that the cops can take you home, your name is run through the SS database so that we can find where you last filed taxes or got benefits. That's your one-way bus ticket (to the township of your choice in that state) courtesy of the repatriation advocacy group of tax-paying Queenscrappers.

No, we are footing the bill for programs like this not for New Yorkers, but so Democratic Party soldiers have employment doing SOMETHING.

All these agencies require staffing, funding, and paper work.

What else could many of them do? Like their bosses in office, they are hardly candidates for the A Team.

One hand greases the other, no?

All this reminds me of the adage about the dog walking on its hind legs.

Don't comment how it looks, just marvel that it happens at all.

Like Rikers Island, there is a need for an island to put these people like a farm or a working type location to sustain on their own. Keep these people away from the normal working class as they don't deserve to mix at all. Crime would be down and of course, world peace.

I love the illegal alien crying about not being able to apply for housing because she is illegal. Why should we give you taxpayer subsidized housing when you are illegal?

There's a simple solution for you. Go back to your country. You do not belong here! You have no rights you are illegal. I'm tired of these ileegals who think they are entitled to everything because they jumped a border fence.

Hey, they don't call America the Land Of The Free for nothing. That's how the illegals think of our country. Everything is Free.

Another domestic violence survivor, whose name was withheld, said she was an undocumented immigrant, and, therefore, didn’t qualify for NYCHA’s priority housing.

“I applied for NYCHA and I was denied because I did not have the documentation,” she said, bursting into tears. “I think if NYCHA made it easier to apply we wouldn’t be in these domestic violence situations for so long.”

WHAT THE FUCK. It is not NYCHA's job to keep you out of some domestic violence situation that you yourself put yourself in. Then let's add in the fact that you are here illegally on top of that. No one here owes you shit.

This system is majorly fucked up in this city.

S here is the alternative that the bleeding heart left wing liberal wanted to know in the one comment section.

1. Stay away from asshole men.

2. Don't have kids to asshole men or have kids if you cannot afford to have them.

3. Stay in your own country or if you want to live her legally, go through the proper channels.

4. STOP being a taker and learn to live on your own instead of having the government take care of your ass.

5. Stay on the street, we are so used to seeing this shit all over the sidewalks and subways now, it is just another body we have to walk over or ignore.

These types of people do not help this issue at all and this is why people feel the way they do about homeless shelters, public assistance, illegals, etc.

Yesterday's New York Times had an article on what to do about North Brother Island. Check it out here.

Seems like an ideal place to house the homeless. 'Twas good enough for Typhoid Mary.

I love that last line of the article: "Councilman Fernando Cabrera, who represents the Bronx, had loftier ideas. 'I would like to have Disneyland here,' he said. 'We already have Governors Island. We need something different.'

Wow these people get better benefits than actual nyc residents.

Hey, they don't call America the Land Of The Free for nothing. That's how the illegals think of our country. Everything is Free.

THIS IS NOT AN ILLEGAL PROBLEM.

ITS AN ENABLER PROBLEM. THEY WOULD NOT COME HERE IF THE DEMOCRATIC PARTY DID NOT PUT UP A BIG BANNER.

GOTTA EMPLOY THEIR GUYS TO RUN THESE PROGRAMS. HONEST GRAFT.

How about we just take the men out of the equation - then these women wouldn't have to live in fear and require shelters!

I love the way the women are being blamed and not these asshole men.

This is same mentality that worships the NFL wife-beaters and dog-killers!

I agree, we should take the men out of the equation. If they had avoided these men, they wouldn't be in this predicament. Why are taxpayers on the hook for other people's poor life choices?

Why does New York have to do this, why do the taxpayers have to pay for that, why do we have to put up with x, y and z?

All-caps guy said it in his 'big banner' comment. It's because the city votes Democrat. Pure and simple. It's the party of chaos. Most of its elected members, especially in New York, believe more in Marx than Madison.

I warned, in a few comments on a few stories back at the time (and others did too), that as bad as the majority here thought Bloomberg was, what was to come would be far worse. And so it is. Very, very predictable. And it's very hard to see how it'll ever change barring a major, really major, catastrophe that upends just about everything.

one wonders how many inhabitants are from W.AFRICA ?

Isn't it a coincidence that 4 of Samaritan Villages top people used to have big jobs at NYCHA and now they are raking in big bucks running homeless shelters. It is almost like they knew that the NYCHA was going to fail at their goal of providing low income housing in the future. They dug the hole and now they are watching millions of tax dollars being thrown into it (and their pockets).