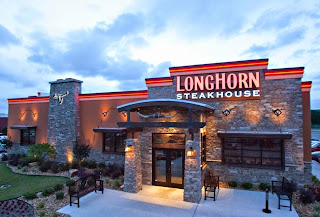 Diners in Queens can now have their fill of all-you-can-eat bread sticks.

Olive Garden, the popular nation chain, opened its first outpost in the borough along with LongHorn Steakhouse on a formerly vacant lot on 59th Ave. at 92nd St., across from the Queens Center Mall.

The new eateries, owned by Orlando-based Darden Restaurants, will employ about 250 workers at an average salary of $15 an hour, a representative said.

Last year, the Mattone Group paid out $3 million to settle a suit filed by the city Economic Development Corp. after the developer scrapped an agreement to build a movie theater on the lot.

I can only laugh at this. The EDC makes a deal for supersized chain restaurants to open in a borough known for its ethnic food.
Posted by Queens Crapper at 12:33 AM

I used to work down the street from this area. It wasn't a vacant lot, it was a relatively cheap, but privately owned parking lot.

Also, there's a ton of ethnic food options in Queens, but not as many in this area. So the chain restaurants there actually do pretty well because there's a whole tower of various government (and some private) offices nearby. The Miller Ale House and Dallas BBQ a few blocks away seem to do good business, not to mention the food court right in the mall that is full of chain restaurants. It's sad, really. This could have been so much more.

What garbage food! As if the people in Queens aren't fat enough!

Typical for Queens - bad Italian and crappy chains - you have to leave the borough to find decent food!

250 jobs but most will be part-time so benefits do not have to be paid.

I thought this was Queens, "The World's Borough", the most diverse place on the planet where over 100 languages are spoken. And with all that diversity and various ethnic restaurants, they dump probably the worst Italian restaurant in terms of taste and health, Olive Garden and then the horrible anti-biotic loaded Longhorn Steak House. Like folks here are not unhealthy and fat enough. Pretty soon they will all be riding motorized scooters

Am I in Queens or the middle of the country, which probably does not even have those crap places.

What's this constant big deal with restaurants? I rarely, rarely, go to restaurants. I eat at home. I know what I'm eating and I save a ton of money.

Oh boy! Olive Garden, all you can eat shit.

The EDC facilitates the raping of our neighborhoods. Can't we create a mechanism where the locals can give feedback? And can we audit the new businesses to make sure they're delivering on their promised employment? In our area,we have had studies done by two post-graduate universities, state-funded BOA studies... all identified potential uses, then EDC moved in two bus companies, with the idling engines, fronting a 50-foot two way street... somebody's cousins operated them, I guess.

Wasn't there an Olive Garden in Kew Gardens a few years ago?

And Whole Foods & Bare Burger would NEVER sell food with additives? Get a grip...

there is a bare burger in queens, it's on austin street in forest hills. been there for years and recently expanded when the neighboring store closed down.

it's cheaper to eat at bare burger than when some family i have drag me to russian and russian speaking central asian restaurants in brooklyn. and better tasting

There is some excellent Italian food in my neighborhood. Try Tuscan Hills, Il Poeta or Tazina!

Years ago, there was an Olive Garden on Queens Blvd. opposite Borough Hall, so this isn't the first one.

Would the Mattones eat at Olive Garden? Can they vouch ofr its Italian authenticity?

So publicize and frequent the good ones! There are two highly Zagat's rated restaurants in central Queens--Danny Brown Wine Bar in Forest Hills and Uvarara in Middle Village. I usually eat at home, but when I don't, I frequent these two gems...Danny Brown even has a Michelin star...and Uvarara is simply divine!

"you have to leave the borough to find decent food!"

So let me get this straight: people don't want government wasting tax money, but lobby to crate a "mechanism where the locals can give feedback? And can we audit the new businesses to make sure they're delivering on their promised employment?"

Uh, wouldn't that just waste more tax dollars? If you are really for limited government shouldn't the market decide by the establishment's profitability or lack thereof?

Lots of corruption and crap going on in Queens as usual! The Mattone's would never eat at an Olive Garden or those other cheap chains. At a time of revitalization where Brooklyn and Manhattan are getting fancier and have more exquisite selections in food and stores, Queens is still stuck in the late 90's to early 2000's with crap. Lots of Fedders specials still being built in Queens, while Brooklyn and Manhattan are getting buildings that fit into the trends of the neighborhoods (for the most part, residents are fighting for landmarking and protecting their neighborhoods and salvaging old buildings and reusing them. But not in Queens where the people here want to move out or don't speak English and we have cheap uneducated contractors and developers. People are opening up small boutiques and artisan restaurants all over Brooklyn and Manhattan and Queens get big chain shit food restaurants. Hmmm when are the smart intelligent people of Queens (that are living in this borough and I know there is a lot) going to start opening their mouths and fight for a better Queens without selling out and welcoming more crap!

Both of which are fairly far from the subway.

Come on. They just opened an IHOP on 6th Avenue and a Denny's in the Finanical District. A Dairy Queen also opened in Manhattan recently, that was big news and Paneras are popping up all over there.

Meanwhile, there's been plenty of new artisanal places opening in Queens, in LIC and other places.

All the boroughs have room for both types of development.

There are three BareBurgers in Queens, and that neighborhood couldn't support a Whole Foods. As for the one who said there aren't any ethnic eateries in that area - have you walked a few blocks to Grand Ave? Some of the best Asian food in Queens is there.

Shitty restaurants like Olive Garden and Longhorn will do well there because it's right near a mall. Malls attract mall food, and malls attract high school kids out on dates that want to go somewhere "fancy" like these places. When I was in high school the fancy date place was Beefsteak Charlie's in Forest Hills. This is no different. I'm a grownup now, and choose not to eat at crappy chain places anymore.

There is already a "mechanism where the locals can give feedback" - it's called letting people decide whether they want to patronize the new restaurants or not. I have no doubt that they'll be packed, and good for them. They're not my cup of tea, but hey, I don't expect every single restaurant and store in the borough to cater to my tastes, and I see no gain in disparaging those whose tastes are different.

I think you are missing the point about giving feedback. The EDC is a private corporation that works as a public agency. They come up with one harebrained scheme after another (think Willets Point) and the City Council goes along. Then when they fail to deliver what's promised, or pull a bait and switch (as in this project), there are no consequences. So yes, there should be a method by which the public can hold them accountable.

For some reason, these chains outside of Ny,are decent. When they come to the city, they seem to suck. The only exception seems to Outback .Il poeta blows, Tazzina you need reservations,but well worth it,as is Nicks Bistro.

"have you walked a few blocks to Grand Ave? Some of the best Asian food in Queens is there."
Ah, that would be Broadway, northside of Qns Blvd. I guess the filth adds to the flavor of the food. Btw, you wont find any stray cats there either.

Scam! The owner of the parking lot between the restaurants has worked out a way to earn the money back from the bad development. Today I was forced to pay $125 (plus tax!) because I didn't read the fine printed signs - or they would tow my car away!!

I get it, I made a mistake, but I am not from here and didn't read the signs (small, fine printed ones)

Please watch out! - do not park between the restaurants and leave the area, even for two minutes, then they say you need to pay $125 or they tow away your car.

The plot owner, the restaurants, you should all be ashamed of yourselves!