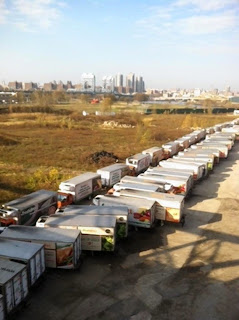 Ramon Jimenez, a Bronx lawyer and Green Party candidate for Attorney General, called on the state Joint Commission on Public Ethics to investigate the actions of a lobbying firm representing FreshDirect in its bid to move to the Bronx.

In the complaint, filed Friday, Jimenez accuses the lobbyist, The Parkside Group, of contacting Mayor de Blasio’s office on behalf of the online grocer and not properly disclosing its activities to the ethics commission.

“We want the law followed as far as them having to record all contact they have with officials,” Jiminez told The News Friday. “It’s a concern for the people of New York, and especially to everyone in the South Bronx.”

A Parkside representative said the group was well within the boundaries of New York’s lobbying laws, and chalked up the complaint as a campaign tactic.

“We are proud to be working on a project that is creating thousands of good paying jobs in the poorest Congressional district in America, and we have always complied with all requirements of city and state lobbying laws,” said Evan Stavisky, a Parkside Group spokesman. “This is just another last-ditch political stunt.”

Isn't it interesting that a political leader who purports to represent part of Queens is actively lobbying to move jobs out of the borough?
Posted by Queens Crapper at 12:37 AM

Toby Stavisky may have to take the hit for her son on this one. As well she should.

You don't necessarily want those trucks and their fumes in Queens. I actually feel sorry for the bronx with their sky high asthma rates.

FreshDirect has never been profitable, and continues to exist because it has eaten hundreds of millions of our tax dollars thanks to mayor funsize who would throw money at almost anything that touted new technology or a crammed urban lifestyle, regardless of how shaky its business model. I don't want it at all!

"....called on the state Joint Commission on Public Ethics to investigate..."
This Commission is a joke. Read the report of this past March: http://www.nycbar.org/44th-street-blog/2014/03/14/city-bar-and-common-causenew-york-find-joint-commission-on-public-ethics-not-fulfilling-mission/

LOL....didn't that valiant crusader Tony Avella one employ Parkside to run his campaign? Did not the same Avella once work for the late Senator Leonard Stavisky whose son Evan is tided to Parkside? Hmmmmm....let's see what comes of this investigation demand.