Glendale may get its own zip code 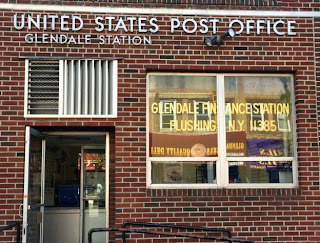 Is it Glendale or Ridgewood? You can’t tell from the ZIP code.

But the confusion may be a thing of the past if new legislation, introduced by U.S. Rep. Grace Meng, gets passed.

“For years, the residents of Glendale have sought to obtain a ZIP code for their community and now I join them in their fight,” Meng said. “Most areas in the borough are recognized by their neighborhood names, which provide a sense of identity and pride for local residents. That is true for Glendale, and it’s time for the Postal Service to accept and recognize that by creating a ZIP code that the community can finally call its own.”

The pleas for a Glendale ZIP code have been constant for over a decade but have continually fallen on deaf ears, according to published reports. The neighborhood currently shares its 11385 ZIP Code with Ridgewood.
Posted by Queens Crapper at 12:14 AM

That Great Legislator - Grace Meng: Champion of the Zip Code.

Alright I'll bite. Why exactly does anyone care what their zip code is?

Because if you type Glendale into a GPS, it doesn't come up, and people weren't getting their packages.

all the identity stuff? eh, it's more practical than that. because places show up as ridgewood instead of glendale, it means that unless somebody already knows the area, they're likely going to have a problem finding the address.
streets in this area are broken up by cemeteries and train tracks even though they have the same name. plus there's that whole same-number-but street/place/lane/avenue/road/drive thing going on. so for plumbers, contractors, business suppliers, take out, etc., it's hard to find places unless you're familiar with the neighborhood. even elected officials get confused.
somebody goes looking for a home depot and it's supposedly in ridgewood because the zip code is the same as ridgewood? c'mon, this should have been fixed already. 11385 is a geographically huge area for new york.

It is a big deal because your car and house insurance rate is based on your zip code.

I lived in Glendale EAST of Woodhaven Blvd and until 1979 the zip code was 11227. We had to travel to Brooklyn for any city services due to a Brooklyn zip code.