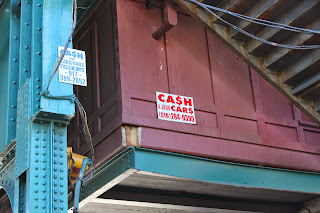 One civic group says the illegal signs that pepper the area are an eyesore and the group is calling on a City agency to find a solution for the problem.

The Woodhaven Residents’ Block Association recently issued a report detailing the problem illegal signs have become in their neighborhood, and through many parts of the City, and are asking the Sanitation Dept. to improve its response to complaints about the signs and take them down faster.

The report, which was obtained by the Queens Tribune, describes the civic group’s experience with reporting the problem to the Sanitation Dept. for the past four years, including the agency’s response to the complaints when it has been logged into the 311 system.

The report is based on 164 service requests the WRBA has filed about the signs during that time period, reporting a total of 142 illegal postings.

They also said that 28 percent of their requests appeared to never have reached the Sanitation Dept. after filing it with 311.

On a recent walk around Woodhaven to follow up on the signs they reported to 311, WRBA member Alex Blenkinsopp found that the majority of the 17 signs that were observed were either partially removed or not addressed at all, even though they were told that the complaint had been resolved. There were also four new signs discovered while on the walk. They were previously undiscovered by the civic group and were not included in the 17 that were followed up on.

The signs are mostly posted on street light poles, mailboxes and pedestrian signs in high traffic areas like the intersection of Woodhaven Boulevard and Jamaica Avenue in Woodhaven. Some signs are also posted in residential areas, which, according to the WRBA, tend to take longer to address because it is not in a highly visible area.
Posted by Queens Crapper at 12:16 AM

Simply charge the people that own the phone number $500/day as long as the signs are up.

Let them remove them so they stop getting fined.

Lack of manpower. When you are a sanctuary coty you have a large populace,but a small tax base.

I take them down myself whenever possible, immediately.

To Anonymous #1: That doesn't work in most cases because the advertisers use disposable ("burner") cell phones with untraceable, temporary numbers.

There are only a handful of these Cars for Cash that are posting anywhere and everywhere. From the looks of the over-posted Queens landscape, DSNY has list the war and has given up. The posters are being glued to every piece of city property which is illegal.
Guarantee these are most likely related to overseas criminal organizations.

Sanitation should call the number say they have a car for sale, have the tow guy respond and fine him 5000 for responding. The tow guy would be responsible unless he gives up the guy in charge of putting up the signs. That would stop the nonsense real quick.

On another note, if someone is able to get signs high up as this photo shows on a subway platform or on the LIRR Trestle which I have seen in Jamaica without being detected, what is stopping someone from putting a bomb in these locations as well. Considering all that is going on with terrorism these days, food for thought.

I would view this more than just a Sanitation issue, there is certainly a public safety concern as well. But DOS is doing a lousy job in this department as is the City overall. If you really want to stop something, it can be done by the powers to be.

I am not a robot. I am a real person.

The city SHOULD take these signs down right away but they can't do it fast enough.

So, armed with my trusty homemade tool (http://www.causs.org/tools.html), I take the signs down in my neighborhood myself. In the last few years I have removed around... 250 of them. After the first 100 or so, it's tough to keep track.

I'm always very mindful of overhead wires and traffic and don't take down any that would put me in danger. I'm super careful. For these, I call 311, which results in sign removal SOMETIMES.

My immediate neighborhood is now almost devoid of these CASH FOR CARS and WE BUY HOUSES eyesores.

Next up, it's time to get going on those fake charity clothing donation bins. Remember, if those bins are placed on a public sidewalk, they are abandoned property and are therefore garbage.

So, if somebody chooses to use heavy duty epoxy to seal the donation lid shut, well that's the way the cookie crumbles.

If somebody wants to take some of that same epoxy and spread it all over the keyholes of the locks securing the large access door, oh well. I guess that bin won't be opened anytime soon.

So don't forget. If a company chooses to abandon property on a public sidewalk, then ANYBODY can pretty much do ANYTHING they want with it. It has been ABANDONED and can be treated like GARBAGE.

Could it be that someone from DOT is doing this as a side job????

I rip them down when ever i can as well. If not you'll be looking at them for years to come.

Some of those signs are put up with super adhesive glue and real hard to take down and many are up so high they used a cherry picker to put them up.
This job is to big for the Sanitation Dept. they like to go after the yard sale and lost dog signs that's a little easier work for their inspectors. A few years ago they went after the Maspeth Chamber of Commerce for putting up signs on the poles for a community event and fined them $75 for each sign and it totaled a couple thousand dollars.They appealed but I don't know what the out come was.

Checked out the link . . . that's nice BUT why does the citizenry have to do this when there's a Sanitation Department?

"Checked out the link . . . that's nice BUT why does the citizenry have to do this when there's a Sanitation Department?"

But I got tired of looking at these things and continuing to make complaints with mostly no results. So, I started taking the signs down myself.

Now where I live is mostly free of these signs and it stays that way with my periodic maintenance. My neighbors have seen me take them down and have thanked me personally. I'm happier. My neighbors are happier. It's win-win as I see it.

But, if somebody else would prefer to wait for the city to take a more aggressive stance against these signs, fine.

If they are on a non- flammable surface, a blowtorch oughta do the trick.

Understand: the Woodhaven Residents' Block Association wants the Dept. of Sanitation to *encourage* residents to take the signs down, while also allowing residents' testimony and photographs to be used as evidence to prosecute whoever's posting. The WRBA wants to add to the Sanitation Department's efforts, not just rely on it -- especially because, as their report shows, it can't be relied on.

The problem with 311 is that you can't attach a photo of the poster in the online complaint form. When a DSNY agent can't find the poster, the 311 complaint gets dismissed.

Go out and do something yourself. Straight and simple. Clearly, the city isn't trying to do much about this problem.

My idea is to tear down as many of these signs and stuff them into the illegal pink clothing bins.

I've been reporting these signs on 311.com for a while now. Most of the time, the case is "Closed as the issue was resolved" or some BS like that, but the signs are still there.