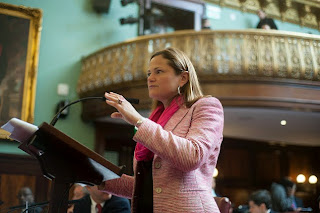 The New York City Council overwhelmingly passed legislation today to stop the Department of Correction and the NYPD from honoring immigration detainers issued by the federal government unless they are accompanied by a judge’s warrant.

The council voted 41 in favor and 6 against on two bills that will largely end cooperation with the federal government when it requests an immigration detainer — which asks Corrections or the NYPD to hold a person for 48 hours when they might otherwise be released so that the person can be handed over the the Immigration and Customs Enforcement Agency. The requests are often made when an undocumented immigrant is being released from jail for another crime, or if they have been in NYPD custody for questioning.

Under the new legislation, which Mayor Bill de Blasio has said he supports, the city will honor immigration waivers if the federal government requests them with a judge’s warrant — and even then, only if the subject of the warrant was convicted within the last five years of a violent or serious crime, or is a possible match on the terrorism watch list.

So they passed a law that said the NYPD should ignore a federal judge's warrant? And only 2 Queens councilmembers (Vallone and Ulrich) voted against this? Holy crap, we're in big trouble.
Posted by Queens Crapper at 12:51 AM

O.k. Then let's issue those warrants !

"The requests are often made when an undocumented immigrant is being released . . ."

Use the CORRECT term and don't let the left wing bastards commandeer the language.

I wish the "undocumented" would demand their rights as they were sneaking in to our borders or demand protection from the feds as they are telling customs officers that they are only coming here for a "vacation".

Someone should check and see if the counct speaker had all her papers. 41 stupid assholes.

Stop with "undocumented". These folks are ILLEGAL IMMIGRANTS as in here in this country illegally.

The council folks on board for this ASSHOLES.

What is wrong with this city.

"And only 2 Queens councilmembers (Vallone and Ulrich) voted against this?"

Let's just do away with everything but the Federal gov't. No state or local gov't. Let's have country-wide driver's and professional licenses.

MMK should not be in charge of anything dealing with illegals! Every Latino I've ever met thinks that all Latinos are saints!

"What is wrong with this city".

It's trying to outdo DC in its far Left madness. So far, so good.

The sad thing is that these council members will be elected to one office or another for life, will do everything to destroy the quality of our life because of the apathy displayed by millions of new yorkers by not voting. We got ccomrade Bill now where stuck with him for the next 20 years at least.

He has a four year term and may be re-elected once. Vote wisely next time.

The undocumented illegals present an incredible opportunity for services manned by Democratic stalwarts, to say nothing about driving the pain-in-the-ass quality of life people out of communities.

BTW, their action is probably illegal. You cannot pass legislation that encourages people to ignore laws on the books.

If we had a president who cared, he or she would direct the Treasury to cease all payments made by the federal government to New York City, and all its governmental entities, until the federal law was again recognized in New York City.

Given the current situation shouldn't all illegal aliens be put on a watch list.

Bread and soup are waiting at the docks.

I cant wait to get my official NYC ID card. How 'bout you?

a MASSIVE public burning of them.

Where? Borough Hall where Civic Virtue used to stand.

The 1% and our elected officials at all levels are much more interested in helping illegal aliens than American citizens. I don't know why this is! Do they really think it will get them more votes than they'll lose?

Watch NYS politicians jump on this bandwagon. The NYS Senate and Assembly both have the "N.Y. is Home Act" in front of them. This act would allow illegals to get tuition aid, Medicaid, vote, and even hold public office. Ask your NYS candidates how they would vote on this if is brought up for a vote. Ask before the election and good luck getting a straight answer.

This madness stopped 100 years ago when the anarchists started targeting the business elite.

Today's anarchists do not use rusty revolvers or oxcarts full of nails and black powder.

How about we petition the Federal Gov't to restore law and order in NYC. Would not be the first Federal troops sailed into NY harbor.

Bread and soup are waiting at the docks.

What votes, where? You have to be a citizen to vote, last I heard. I know the Council's trying to change that for municipal elections, but that's not their motive for this bad bill.

Please deport the illegals. ....start with the ones who just posted comments!

This is for show, people, and entirely unenforceable. No federal judge is going to sit idly by and accept that his/her warrant is denied by these two-bit idiots who couldn't get a SINGLE lawyer in their 41 offices to realize that this contradicts the Supremacy clause of the Constitution.

Hate to interrupt the ranting, but take a look at today's Daily News editorial which reasonably supports the City Council plan.

It's reasonable to ignore federal warrants? Sounds like the DN editorial board is on crack.

What? Doesn't the article say the order is to ignore requests to keep people detained EXCEPT when there is a judge's warrant?

No. Read it again.

The only thing these young cops can do is bury their faces in a smartphone. They aremostly uselss/clueless.

"The New York City Council overwhelmingly passed legislation today to stop the Department of Correction and the NYPD from honoring immigration detainers issued by the federal government unless they are accompanied by a judge’s warrant."

Any immigration and / or criminal lawyers want to weigh in on the difference between a detainer request and a warrant?

Q: What is an immigration detainer?

A: An immigration detainer (Form I-247) is a notice that DHS issues to federal, state and local law enforcement agencies (LEAs) to inform the LEA that ICE intends to assume custody of an individual in the LEA's custody.

An immigration detainer serves three key functions: 1) to notify an LEA that ICE intends to assume custody of an alien in the LEA's custody once the alien is no longer subject to the LEA's detention; 2) to request information from an LEA about an alien's impending release so ICE may assume custody before the alien is released from the LEA's custody; and 3) to request that the LEA maintain custody of an alien who would otherwise be released for a period not to exceed 48 hours (excluding Saturdays, Sundays, and holidays) to provide ICE time to assume custody.

The Council is saying to Correction don't honor a non-obligatory request from a federal official and to only honor it if there is an arrest warrant from a federal judge. This way, they've had to make show in court that this person actually is here unlawfully.

No, the council is saying that even if the judge signs the warrant, that Corrections will only honor it if the person has a conviction for a serious crime within the past 5 years.