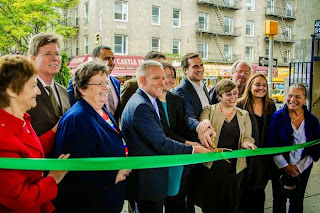 There's a new place to sit in the neighborhood, as the second of two public plazas under the elevated 7 train line is now open.

Officials cut the ribbon Friday on Lowery Plaza under the 40th Street Station in Sunnyside, which has been made over into a public gathering place with tables, chairs and plants, according to the Sunnyside Shine Business Improvement District.

The BID is managing the new site as part of the Department of Transportation's NYC Plaza Program, along with Bliss Plaza, which opened under the 46th Street Station in July.

I don't know who would want to sit underneath an elevated train with traffic whizzing by on both sides of them, but whatever floats their boats...
Posted by Queens Crapper at 12:24 AM

...not to mention no natural sunlight!

They should make it into a free parking lot so we have a way to still get into Manhattan once they start charging tolls on motorists over the QBB that was already paid off decades ago with maintenance covered by our taxes for infrastructure.

I think the issue here is to give Jimmy, Cathy, and Mystery Mike Gianaris (who is running for yet another do-nothing term in Albany) to show the public that they are doing SOMETHING.

See how they hog the center of the picture?

A few weeks back I called Cathy's office in the middle of the day and no one picked up, and left a message with Jimmy's machine answering service machine that took my time to tell me that he is the majority leader.

Both never called back.

This is NYC - people sit in worse places than this. Time will tell if it gets used much. But sometimes these locations can serve as transitional space, linking two sides of QB. Perhaps there could also be seasonal green markets.

1,000 bike racks will be installed under the 7 el next. Just watch.

good luck co-existing with the pigeons,and if there's a green market and those crappy foodie trucks look out

Both never called back.


Did you make your campaign 'donation '? Well what do you expect?

There are resumes and towers to be built! These things take time. Your issues are those of ' little ' people.

Meanwhile why don't you help out by taking a brush and painting over the graffiti and a bag to clean up the bird shit?

THEN they (might) notice you. You (might) even get an official proclamation the size of a small card table!

You've got a perfect location for a plaza there.

And let's not forget, exhaust fumes from the bumper to bumper traffic on Queens Blvd tends to hover under the overpass. Jimmy better make sure CO detectors are installed so nobody sitting in the plaza is overcome by fumes.

A great place for more Mexicans to take a nap.

Under the M it always drip