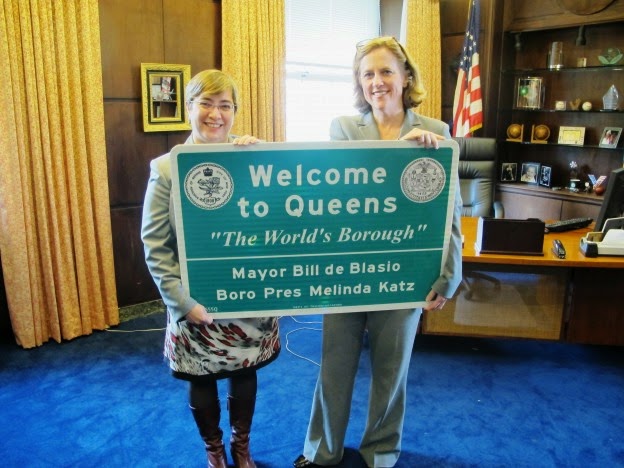 Queens Borough President Melinda Katz and Dalia Hall, the Queens Borough Commissioner of the city’s Department of Transportation (DOT), revealed the new Welcome to Queens street signs, which include the tagline describing Queens as “The World’s Borough.”

The phrase is meant to reflect the cultural diversity in the borough, which is home to residents representing more than 120 countries and speaking more than 135 languages, according to a statement released by Katz.

“You haven’t really seen New York City unless you have experienced the diversity that is in Queens,” said Katz, adding that the new signs with the slogans will help “to get that word out.”

DOT Commissioner Polly Trottenberg praised the signs and said they “proudly highlight the level of diversity making Queens unique among the five boroughs and also nationwide.”

Yes, in case you haven't gotten the message yet, our borough is diverse! (So please excuse its appearance.)

And how about a caption for this photo gem... 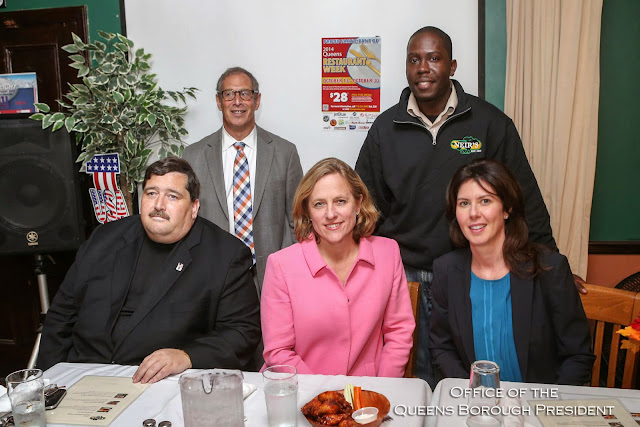 3 politicians bought a small order of buffalo wings at Queens Restaurant Week?
Posted by Queens Crapper at 12:48 AM

Who thought up this "motto"? WHO?
It is the lamest thing I could imagine. Why wasn't there a contest held with suggestions from the citizenry? The mottos that Markowitz conjured up for Brooklyn were great. We have to live with this uninspring wordage now?

Can she please stop with this "Diversity" thing? It's getting sickening already!!! Every other word coming from her is about "diversity"! The whole city and country are diverse as is the whole world. So enough already. Most white people who used to live in Queens know what "diversity" is the code word for. That's why so many have left and are leaving this filthy, overdeveloped, third-world looking borough!

THIS is what the QB President and DOT commish are worried about? Fix the goddamn parking lot!

Queens is "Diverse" in the same way a toilet bowl is "Diverse". All kinds of shit ends up here and no one flushes.

Politicians like to divide and manipulate which why they embraced diversity ad nauseam.

Do not talk about the problems of a neighborhood for that will band the people together. Discuss gays, seniors, blacks, Bukarins, but not communities.

As someone point out, Brooklyn and Manhattan are diverse but they can come up with ideas to explain their charms.

Not Queens. With the lo-voltage types running this borough all they can do is repeat the same things over and over and over again. After 40 years there is no incentive to change.

The really funny thing is that the borough for the last 150 years is controlled by the Irish - something dating from old Long Island City.

Fun under the table with Curtis Sliwa.

Then: Queens the Borough of Homes.

Now: Queens the Borough of Gnomes.

I have never seen such a load of crap in my life. How much of my tax dollers went for this bull. Stupid is as stupid does.

All kinds of shit ends up here and no one flushes.

this should be tagged everywhere,(
sorry graffiti haters)

I don't have a caption but check out the two white guys looking to their right,especially the guy standing that is obiviously uncomfortable being near that
black dude.

welcome to queens:still awkward around minorities

Hey, don't forget you are paying for the photos, too. Is Dom Totino still on the payroll?

Wouldn't it be nice to be able to put "Welcome to Queens, home of the city's best schools" or "Home to some of America's most important historic sites"?

But we can't claim either of those, can we since we like our kids dumb and we knock everything down of historical significance?

So we can put up signs showing Queens is diverse, but we can't replace all the missing and faded street name signs around Queens.

Your comments have hit the nail right on the head. I and most of the people I know feel the same way.
The bullshit politicians have done nothing to ensure Queens (or the rest of our country) has a fine quality of life for the AMERICAN CITIZENS who belong here. In Queens diversity equals over crowding, filth strewn sidewalks and "new" residents that soak up public funds and thumb their noses at our traffic laws.

Huge waste of tax payers money and the phrase makes really no damn sense at all. It is just idiotic. Who the hell signed off on this shit. Instead of doing something like say "improve Queens", the powers to be felt the need to come up with one of the dumbest signs imaginable.

What does Queens really have to offer besides shit diversity. We don't even have the good diversity, we have bottom of the barrel diversity.

"Queens..the Wild West for unbridled under thought over
development."

This is my submission.

A free blow job for any developer who supports my campaign for re-election.

There we go again..."vibrant and diverse"...the usual euphemism for coarse and ghetto! Didn't they leave out "bustling"?

Curtis Sliwa must have come up with that motto for Melinda between pokes.

It all began to go down the tubes years ago once the Protestant majority was lost. Since then it's been nothing but corruption starting with the long reach from Rome.

I like the non official motto that's been used for years...pointing out our airports and cemeteries..."Queens, where people come to fly and die".

What is with you people? Most of the comments demonstrate small minded bigotry.

As an aside, all tag lines are for marketing purposes. This one is obviously designed to call tourist attention to the food and neighborhoods of the borough. (FYI - Marty Markowitz's lines were clever, but accomplished nothing.) Tourism and homeownership are marketable items. And, this is ONE standard way of doing it.

Melinda if you are going to wear pants suits how about getting them tailored. Arms to long and pants too long. At least Hillary suits fit.

No politician should be named on a city owned sign until they're dead for at least 20 years. (The smell will have dissipated by them)

As for the motto, it should be:
Welcome to Queens, the Corrupt Borough of Thieves.

I am convinced that she is not connected and must be on drugs or something...

I don't think most tourists know what a borough is, so I doubt it accomplishes that.

Tourists don't drive to Queens. They take a train or subway.

The one person is totally right, most people from other places do not know what a borough is, that for the most part is unique to NYC, so no, that would have no meaning to tourists or visitors.

Also, people visit New York City for New York City (read Manhattan), they do not come here to see the boroughs, so stop attempting to make the borough and especially Queens a tourist stop. Hell if most visitors came to Queens and not Manhattan, I don't think they would come back to New York, considering how third worldish Queens looks.

So instead of constantly trying to sell Queens as a tourist attraction (which it is not), put money into improving it after all the years of neglect, over-development, destroying neighborhoods, history and making it pretty much a landing strip for every low-class immigrant that comes off the banana boat in droves.

I wish they would stop adding the Borough Presidents (and Mayors, for that matter) to these signs. Nobody driving down the road needs that information. If they want to file a complaint or get in touch with that office, they'll look it up online, or find it anywhere else EXCEPT from a sign on the road. In the meantime, we waste $ replacing these signs after every election.

"Melinda if you are going to wear pants suits how about getting them tailored. Arms to long and pants too long. At least Hillary suits fit."

It all began to go down the tubes years ago once the Protestant majority was lost. Since then it's been nothing but corruption starting with the long reach from Rome.

Lets see, you are one of two things:

1. you are a member of the No-Nothing Party which was strongest during the 1856 elections, and sort of faded away.

2. you are a hack planted by Virginny Joe to give this blog a bad name.

Why did SHE get to decide what our borough's motto should be?
There should have been a contest.
But in order for it to be ALL INCLUSIVE for every immigrant in the county, instructions would have had to be printed in 170 different language, besides ENGLISH, our national language.

We don't have an official language in this country, if that's what you meant by 'national language'.

The US speaks English, it's primary language.

Doesn't our borough have other things to offer besides diversity?

Diversity is a code word for Whites Not Allowed! That's why so many have fled Queens leaving only 25% of its population White. Food and language do not make a borough. Assimilation and obeying laws do.

Diversity is just another word for population fragmentation. Divide and conquer is the politician's motto when he chooses to hollow out a nabe for over development. The more "diverse" a neighborhood is the less coming together as a strong majority on issues affecting quality of life. Each dog for his own agenda is what gives pols power over the individual. Hang together or be hanged separatly

WTF? Has alley Katz taken to wearing pants suits now like another pasty faced Democratic buffalo face Hillary Clinton? She's hiding her cellulite along with her shady campaign donations. With the uneducated, turnip headed farmers that compose the electorate of Queens....you get the politician that's been bought and paid for by crooked developers and questionable foreign interests.

George.... Brooklyn is a far better borough than Queens when it comes to cultural attractions and architecture. For example, Markowitz swore he would restore the famous Loew's Kings theater if it was the last thing he did as borough president. And so he did. Contrast that with the RKO Keith's Flushing theater. Two successive borough presidents, Manes and Shulman sold it out. What can we expect from our developers' puppets government in culturally bereft Queens. Queens' beeps are here to serve the real estate industry not us constituents.