Subways are bursting at the seams 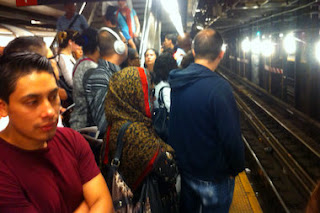 The platform at the Jackson Heights/Roosevelt Avenue station — the second busiest in Queens with nearly 51,000 riders every day — is routinely packed during the early-morning rush as straphangers wait for the E, F, M and R trains.

Jason Chin-Fatt, a field organizer with the Straphangers Campaign, rides the F train from the station every morning and said the platforms are “excessively crowded,” especially if the 7 train, which is connected to the station along with several bus routes, isn’t working properly.

“It’s to the point that people are almost spilling over on to the tracks,” he said.

The lack of infrastructure is increasingly obvious to anyone that thinks.

Of course getting squeezed on trains or displaced because some rich jerk wants your building hardly creates a ripple.

But not knowing what to order in a Colombian Restaurant or wearing the wrong shade of shoes can create quite the controversy.

For a city that calls itself the Capital of the World an increasingly large share of it is simply dip-shit.

What happened to staggered work hours?

Yes but are the people falling on the tracks vibrant and diverse?

Whatever happened to working from home?

Who can stagger anymore?

8-4 and 10-6 might have worked when everyone was doing 9-5, but when most companies want you at your desk from 8 to 6, there is no room to stagger.

The subways are bursting at the seams because Obama doesnt deport these illegals and allows millions more to come over.

add more trains during rush hour so there's some relief on those platforms!

The subways are bursting at the seams because Obama doesnt deport these illegals and allows millions more to come over.

any serious discussion criticizing development or a politician will inevitably be followed by a racist or immigrant bashing cant.

Whatever the reasons are, the 7 train sucks big balls. The "Express" is not that express after all, always stops by the Sky View mall coming from Manhattan and sometimes doesn't moves for 5, 10 or more minutes and this happens every day. What's the use of using the express if you're going to be late anyway?
Some morning the crew makes you jump from one express to the other just to make you go back to the one you were seated first. Appears that they like to play jokes with the commuter. Nobody inspects these people. Bunch of losers that have one of the best jobs in town.

What is the current carrying capacity of the NYC Subway system?
At what point will (or did) the population of the region exceed the rail transit system's carrying capacity?
Can capacity be added without the construction of new rails and tunnels?
These are the types of questions that PlanNYy should have been asking instead of looking for places to build sports stadiums.

You can add trains by upgrading the signal system anon. MTA is dragging their feet on that. Add peak hour pricing to encourage people to stagger too. Pols will fight it though.