Queens has most illegal conversion complaints 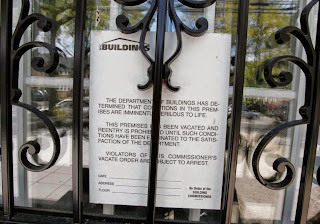 Half of city's complaints about illegal apartment conversions or subdivisions are in Queens, prompting an aggressive approach by the Department of Buildings in the borough, according to a representative from the agency.

Nearly all of the warrants the city has filed to force homeowners to allow access to their homes after inspectors repeatedly couldn't gain entry have been in Queens, according to Anthony Iuliano, an intergovernmental liaison for the borough.

"We pursue a more aggressive approach here in Queens county," Iuliano said Oct. 23 at a town hall in Corona sponsored by Assemblyman Francisco Moya, adding that last fiscal year, 272 of the 278 warrants obtained to access homes where there's evidence of conversions were in Queens.

The results of those warrants weren't clear. It's not immediately clear how many additional warrants were filed this year.
Posted by Queens Crapper at 12:44 AM

Maybe if there were legal places for these people to live this wouldn't happen.

He sits down with a borough attorney...and has lunch. That's about it, because nothing happens.

I'm in the market for a home now. On a whim, I stopped by an open house in Woodhaven. It was being used as a 2 family. When I asked the realtor if it was a legal 2 family he said no. Then he showed me the basement and said it could be converted for extra income because it's not legal, "but everyone around here does it." On the way out he told me that there's tons of space, and he had advised the two men who visited before me that they could even make an extra room out of the already small living room. The house is a mess. The shower in the "master" bath is elevated and if you're 6 feet tall you can't stand in it. Welcome to Queens.

"...prompting an aggressive approach by the Department of Buildings in the borough, according to a representative from the agency."

I've complained to DOB and council member Crowley's office at least FIVE TIMES about illegal conversions on my block in Middle Village and NOTHING, NADA, ZIP, ZERO, ZILCH has been done.
I find the representatives claims to be pure political BS.

"An aggressive approach" - Complete lie and bullshit. As someone who has made numerous complaints to DOB in regard to illegal conversions, nothing happens to most. And forgot about your city council members, they are even more useless than DOB and just as corrupt.

"I've complained to DOB and council member Crowley's office at least FIVE TIMES about illegal conversions on my block in Middle Village and NOTHING, NADA, ZIP, ZERO, ZILCH has been done.
I find the representatives claims to be pure political BS." DITTO

More than 90% of Queens do not file for any permits. This is going on over a decade. This is DOB fault they closed their eyes for their bodies. This is a custome now. Any time anyone calls they never see or find anything. On October 17, two trucks of demolition garbage from 129-16 14 ave College Point and this is not the first time. Check the complain history. All they get is don"t do it again. But they will do over and over again.
No permit for demolition
No permit for plumbing
No permit for electric
No permit for renovation .

They are biggest mistake for city
Crowley's office .

DOB ought to be investigated AGAIN. They appear to enforce NOTHING. Not elevator laws, not Local Law 11 work, not illegal conversions. The elevators in my building are on their top ten list of worst elevators in the City, yet there are no signs of anything being done about the situation and when 311 is called they still say DOB will investigate w/in 40 days. For a building on the top 10 list, this is entirely unacceptable.

"Aggressive Approach"?!?! That is so false!

Numerous homes on my block have been converted from a one family to 2 or 4 families. Calls to 311, DOB, police, and the local firehouse have yielded NO results.

One home (86-45 231st Street Queens Village NY 11427) has 5 apartments in a 2 family (one family is living out of the GARAGE!). The home has many entrances, doorbells, mail boxes, etc and nothing is done. The property is run down and dirty.

They even have a mosque in the basement that has one entrance and over 50 people checked in on social media! (http://www.islamicfinder.org/phone/getitWorld_phone.php?id=118288) (https://www.facebook.com/pages/Masjid-Bilal/563014047074506)

THIS STATES IT IS IN THE BASEMENT:(http://www.salatomatic.com/spc/capGJ8KoDE)

No one will do a thing and we will continue to report this it no avail. Families that have lived here 20+ years are starting to move away just to get away and I'm starting to believe that may be for the best.

DOB is so dopey that I'm amazed their investigators have jobs.

Numerous complaints and the result......the DOB sent investigators and no violations were found because they couldn't gain access.

Perhaps the only thing DOB is aggressive about is collecting money under the table so that landlords aren't fined.

and the most illegal people!!!

There's something fishy going on specially in North Flushing where two family homes are abundant. There's one or two contracting firms that go randomly calling 311 and placing complaints about illegal basements all over the place, after a few days they send advertisements to the targeted property owners offering their services to help them to legalize their illegal cellars.
Someone should investigate if they are in cahoots with D.O.B. inspectors or just being greedy bastards causing havoc everywhere.

My experience has been that when DOB shows up and is denied entry by the occupant, it makes one or two subsequent attempts and then closes the complaint. So one only has to "Just Say No" to the DOB inspector and then nothing happens.

There's a housing shortage even before kicking out all the families in these illegal units. The city has to plan for 2%+ annual growth in housing stock. Do that and prices can come down, reducing the economic incentive to split units illegally. And you'll be able to put together the political will to shut down illegal conversions once there are legal places for these people to move to.

yes, let the hacks have a field day.

Sorry but there's no "housing" shortage. There's a shortage of units that people can afford to live in.

Too many people are going after too few units so prices rise and many get priced out. Some leave, some move in with others illegally, some move into illegal apartments. Increase supply and prices drop. Get rid of illegal units and prices rise.

You have to increase supply 2%+ per year at least. More if you want to get rid of illegal units at the same time.

Rents are going to rise regardless. There aren't any legal units anywhere for $500/mo.


seeing this article reminded me of another case of double standards in this city,has anyone seen this article about these guys butchering apartments so they can squeeze more tenants in and charge more?>>>

I wonder if they got inspired by all the enterprising makeshift landlords that have been in queens for as long as I can remember.When I first searched for places with realtors,the majority were basements and attics.This problem has been going on for years and now thanks to tourism and transplants,and desperation and greed,it will never stop.

50% of units in Brooklyn are rent stabilized. Remove rent stabilization and the rental market will even out with normal prices. Otherwise rents will stay inflated when normal people have to scramble for <50% of the city's real estate.

where are the Unacompanied Alien Children from C.America being hidden in Queens(700) ?

will they ever be sent back home or will they be constantly "CONTINUED" (stall tactics provoked by tax paid legal council/translators) by the naïve new judges appointed to determine why they left in enormous #s this year (160,000 est).

you will have to get a second job to pay your taxes for them.