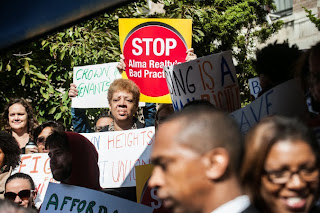 Negotiations over the fate of Astoria Cove, the first new city development to opt into Mayor Bill de Blasio’s affordable housing program, have attracted no shortage of advocates and critics hoping to influence the process.

Housing advocates are pushing for the developer to increase the number of cheaper affordable units. Local officials are concerned about transportation and density. Real estate executives are worried that the city’s sharpened focus on affordable housing will cut into profits.

But on Sunday, the back-and-forth over the Queens project found a new set of stakeholders from another rapidly gentrifying neighborhood: Crown Heights, Brooklyn. The developer of the 1,700-unit Astoria Cove, Alma Realty, owns about 700 units around Prospect Place and is seeking to take them out of rent regulation.

“Mayor de Blasio, don’t fail this test!” pleaded one sign at a rally outside one of the buildings on Prospect Place in Brooklyn on Sunday, when elected officials and tenant organizers urged the City Council not to approve the Astoria Cove project unless Alma Realty rolls back the rent increases in Crown Heights and addresses concerns about its plans in Queens.

The City Council is holding a hearing on whether to approve the project on Monday morning. Council members can push the developer to change its proposal before accepting or rejecting the project.

Councilwoman Laurie A. Cumbo, who represents Crown Heights, said she could not support the Astoria Cove project in part because of what she said was Alma’s history of underpaying black and Hispanic construction workers.

“They’re demonstrating irresponsible development,” she said, adding that she would tell Alma that in order to win her vote, “we need you to come back and clean up your act.”

Since the administration announced in September that all new real estate projects requesting a zoning change from the city would have to build affordable units in exchange, Astoria Cove, which overlooks the East River, has become something of a litmus test for how developers and the city will negotiate future projects.

Part of me wants to say that Alma's chickens are coming home to roost. But then there's the part of me that doesn't see the City Council voting down a megadevelopment project.
Posted by Queens Crapper at 12:33 AM

That is a switch - usually other communities wisely steer clear of getting involved in Astoria.

The old adage of putting lipstick on a pig comes to mind: its a waste of time and only annoys the pig.

just a bunch of people begging for free stuff.

Thats all it is.

Can someone find out if the Constantinople and Vallone is involved with Alma.

@anonymous 2- developers in nyc beg for free stuff too.

If you do a little research, the folks who make up Alma are old Astoria folks.

20+ years ago, all these folks were friends, now they supposedly don't know each other.

Most old timers in the area can connect the dots and know the history of friendships.

People that are fairly new to this haven't a clue of the relationships dating back 30+ years.

Astoria Cove’s developers, 2030 Astoria Developers proposes to reshape the site to include a waterfront esplanade with 2-acres parkland, 1700 apartments, 345 of which (20%) would be affordable, a 456 seat K-5 school, 110,000 Square Ft of street level retail and has announced the creation of a 30,000 Square Ft cooperative supermarket and also a security guard company that importantly will be owned and operated by members of the local, existing community.

Those speaking out in favor of the project included:

Jack Friedman, Executive Director - Queens Chamber of Commerce said: "The Astoria Cove project enhances this corner of our borough by importantly adding 345 affordable housing units, a proposed 456 seat school for grades K through 5 and green spaces and water access for recreation and for families to enjoy. That is just the beginning of the many advantages for Astoria. This plan also helps to bring quality jobs to Western Queens now and long into the future. The Queens Chamber of Commerce believes this project is and will be a great addition for our borough and for Astoria. We wholeheartedly endorse and support the project and the many advantages it will present for the local community for generations to come."

Reverend Dwayne Jackson, Pastor of the First Reformed Church of Astoria said: My church is located close to the proposed Astoria Cove development site, and my parishioners are its neighbors. I am thrilled that the developers are taking the people of this community and our—yes OUR—needs seriously. The developers have communicated effectively with Astoria Houses and Hallets Cove residents about the future enhancement they envision for OUR neighborhood and have been doing so for quite some time now. Together we are painting the future of our neighborhood and that painting is inspiring to us all. This painting articulates the vision of one peninsula connected through open streets, local businesses, job opportunities and community gatherings along the waterfront. The inclusion of Astoria Houses residents and other neighbors has paved a solid road, a solid foundation for which we will continue to build upon for OUR future together."

Teresa McKinney, 37 Year Resident of Astoria Houses said: “Astoria Cove is a great project because it is going to create lots of new opportunities for the entire neighborhood. I am particularly excited about the developers’ commitment to create a cooperatively-owned supermarket. Through this supermarket, our community will have access to fresh food, and, as owners, have opportunities to benefit from the infusion of new residents and investment. I have worked in a supermarket for the past 17 years as a merchandiser and manager. I am eager to be a founding member of this cooperative supermarket and be not just a worker but also an owner.”

Reverend Bobby Moore, Pastor and Overseer of the Astoria Baptist Church and Vice Chair of the Long Island City/Astoria Clergy Coalition said: “Economic diversity MUST be a cornerstone of housing development. An economic balance is something the neighborhood currently lacks. With Astoria Cove and the other development promises to create real opportunities for integration and connection. Astoria Cove will have NO “poor doors” that discriminate between a tenant who pays more and one who pays less. The builder committed to making sure that there are NOT two classes of citizen-tenants, one who gets great amenities and others who get less. Instead ALL tenants will have equitable amenities. Astoria Cove Development has been years in the making. The solutions to many issues were born from research and ongoing public conversations with local community members about what is truly needed to transform the area that now has a rotting, abandoned industrial past, into a beautiful residential mixed income neighborhood. Astoria Cove is a solid community housing model that deserves approval.”

David Hammer, Executive Director, The ICA Group, said: “We are excited by the commitment of the 2030 Astoria Developers to invest in the development of a cooperatively owned supermarket and security guard company and are inspired by their commitment to supporting the creation of community wealth. Over the course of the next five years, we will work with the Developer and the community to create a sustainable community and worker owned supermarket as part of the proposed Astoria Cove development. This grocery store will seek to create high quality jobs that provide living wages, quality benefit packages, employ the best democratic management practices; as well as provide consumers with access to high quality, locally sourced, and healthy produce & prepared foods at a Competitive price point.” (ICA Group is a national not-for-profit whose mission is to expand economic opportunity by supporting initiatives that empower workers, build community assets, and root capital locally through employee ownership.)

Arthur Rosenfield, President of the Long Island City/Astoria Chamber of Commerce said:
“I am here to both recommend and enthusiastically support the Astoria Cove development proposal before you. For 50 years no one has made an investment in this isolated part of the peninsula, until now. 2030 Astoria Developers has proposed a development that will breathe positivity, prosperity, and life to it. It will contribute unique infrastructure so that the western Astoria area neighborhood can truly flourish. We on the local, community level support this project and support and want the jobs and economic improvement that will result leading up to and during the construction phase for community residents and that will remain in place serving the community long into the future.”

Glad to see groups like ElMezzi going into the waterfront and, well, you can fill in the rest.

As this is rehash of developers fluff or someone, like the chronically fragile churches, hoping for more program$.

Nothing new in their testimony. Stuff like this has a pattern and for those of us who study them, the future is clear.

And it is not going to be pretty.