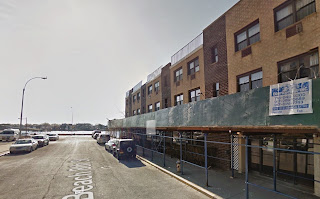 “After hearing the special concerns of Rockaway residents, D.H.S. will not be siting a second shelter on the peninsula,” Chris Miller, a spokesman for D.H.S. said in a statement.

In a letter to the administration this week, Richards cited concerns over the proposed shelter’s proximity to three schools. More specifically, he said his Queens district's “food, transit and infrastructure desert” did not have the resources to serve an increase in population.

The city had sought to transform the former Rockaway Manor on Beach 8th St. into a shelter for 100 adult men, but the proposal infuriated local officials who pointed out a new shelter was just been opened on the peninsula.

The former Daytop Center in Arverne started taking in homeless families over the summer.

“We are extremely disappointed at the decision to discontinue ferry service to the Rockaways,” the lawmakers said in a statement. “We will continue to fight for a ferry that the Rockaways deserves and need to connect the peninsula to lower Manhattan. We are, however, very thankful that Mayor De Blasio has decided to withdraw plans to place a homeless shelter on Beach 8th Street.

So a couple of rookie pols got a homeless shelter in their district nixed, while in Glendale and Elmhurst, the pols who have decades of experience between them can't (or more likely won't) do the same for their constituents?

Very interesting!
Posted by Queens Crapper at 12:48 AM

Those shelters shouldn't go in areas that already have large concentrations of poverty. A rich or middle class area can better tolerate the shelter, and suffers worse from its placement.

“We are extremely disappointed at the decision to discontinue ferry service to the Rockaways,”

Maybe Glendale needs to let them discontinue OUR ferry service in trade for no homeless shelter?

"Those shelters shouldn't go in areas that already have large concentrations of poverty. A rich or middle class area can better tolerate the shelter, and suffers worse from its placement."

I read some dumbass shit here bot this take the puddin'

Hmm... Katz & Addabbo got the Rockaway shelter nixed but can't get the Glendale one shut down?

Who was the "not for profit" that was going to run this shelter? Maybe they did not have the clout that Samaritan Village or Housing Bridge has and the kick-back was insufficient.

Simotas and the other Democratic political hacks who represent Astoria couldn't stop major expansion of the Westway Shelter. And, guess what, on Tuesday she runs unopposed. People get what they deserve.

I mentioned this earlier

Every deal has a tradeoff. The question is what they gave up to keep the shelter out of Rockaway.

If those living in poverty are a small share of an area they have a minimal effect. Once you get much past 20% this is no longer the case. This has been well documented. A well off area can tolerate a shelter or low income housing. Sure plenty of people will freak out but the impact it ends up having is minimal. If the area is shit to begin with that just isn't true. These shelters should not be near public housing and other concentrations is poverty.

Give them all a free apartment for 1 year. If they can't pick themselves up and care for themselves ship them down to haiti.