Queens is hosting the most migrant children 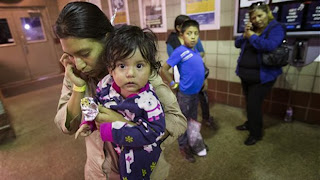 The Department of Education is instructing its principals on how to manage the influx of unaccompanied migrant children streaming into New York City, according to a memo obtained by Capital.

The memo, which contains guidelines for everything from enrolling the children to finding them dental care, was sent to all city principals earlier this week.

The letter states that the D.O.E. is "well-positioned to guide the enrollment, instruction and support of unaccompanied child migrants arriving in NYC."

According to D.O.E. figures, 62,998 migrant children have come to the United States since October 2013. D.O.E. officials said 2,552 of them have been enrolled in the city's public schools: 676 in Queens; 409 in Brooklyn; 404 in the Bronx; and 63 in Manhattan. School officials said they expect an additional 1,000 over the next five months.

The children have come mostly from Guatemala, Honduras, and El Salvador.

New York State will conduct a compliance review of school districts’ enrollment procedures in an effort to eliminate barriers to schooling for undocumented immigrant children, the State Education Department and the attorney general’s office plan to announce on Thursday.

The review is intended to determine whether districts have violated federal law in imposing enrollment requirements that bar children on the basis of their immigration status, especially in suburban counties near New York City that have absorbed hundreds of unaccompanied minors from Central America this year.

The new steps come a day after The New York Times reported that some undocumented immigrant children on Long Island have been excluded from classes because their families cannot gather documents that schools require to prove they are residents of the district or have guardianship — obstacles that contravene legal guidance on enrollment procedures the State Education Department issued in September.

In summary, illegal aliens will get to jump to the front of the school line (I'm not sure if they come before or after the homeless kids), while people who actually come from the areas where their schools are located will continue to be forced to prove it. And then they'll only be offered a slot if there's space left. This seems fair, doesn't it?
Posted by Queens Crapper at 12:26 AM

Every day gives me a plethora of new reasons I got the hell out of the NYCDOE through retirement.Those who, due to circumstances remain in thar fetid hole of a system most certainly have my full sympathy.

why? because they can.

The government knows born and raised Americans/citizens are already brainwashed servants and theres no need to do much to keep them complacent.

The new blood is more valuable to the "machine".

Our Tax Dollars at Work.

FREE DENTAL I'll take some of that for my kids.

Not different with the development going on along the Queens waterfront. Resources from schools to streets to utilities are pouring into that part of Queens while the rest of the borough waits until their all-knowing all-wise public officials tell them they can step up to the plate for their dollop of stew.

One of the reasons that Queens residents are painting over graffiti and cleaning up garbage within their communities.

As long as your are deferential & groveling before your elected officials they will toss a few pennies in your direction, just like royalty did the Middle Ages.

Meanwhile you will play third string fiddle behind (1) developers and (2) that great body of Democrat voting parasites that are employed by welfare-state programs like this which have increasingly lost their direction and original purpose.

i am embarrassed to call myself an american citizen because of crap like this.

Naw, we will wake up, if you crap on people enough everyone has their limits, even the long suffering long abused people of Queens.

It will be fun. Looking forward to it!

So my taxes are going up to take care of this crap?????? NY is rotten and rancid.

Where can I find instructions on how to get dental care for my kids?

why did Comrade Big Bird fire the superintendent of the best scoring math/ela district 26 in nyc ?

she was re[placed by a principal of csd 25.

he also purged the trustees of the Queens library system and replaced them with dem.party hacks and one who studied in PEKING ,CHINA recently.workers of the world UNITE.