No one's home at the Pied a Terres 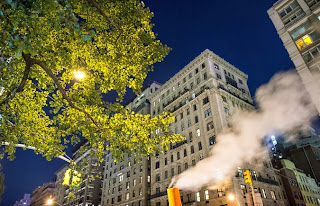 The question of who, if anyone, lives in the multimillion-dollar condominiums being built across Manhattan grows more intriguing with every new tower crane that hoists glass slabs and concrete blocks hundreds of feet into the sky.

New Yorkers want to know: Who are these people who hide behind limited liability companies while shelling out a fortune for a condominium — who see the apartment as an investment or even just a vanity play, and who are too busy sunning in St. Bart’s or skiing in Gstaad to actually show up and shop at the local market or pay for tickets to a Broadway show?

Many well-heeled New Yorkers are frustrated that while a large share of their income goes to taxes of all kinds, their non-New Yorker neighbors down the street pay a comparatively minuscule amount in property taxes. And an evening stroll through Midtown is starting to feel like the Wild West after the gold rush, with buildings like the Plaza — officially the Plaza Pied a Terre Hotel Condominiums — sitting mostly dark. It wouldn’t surprise some of us to see tumbleweed blow by the Apple cube on Fifth Avenue.

As it turns out, this is not just hyperbole.

In a three-block stretch of Midtown, from East 56th Street to East 59th Street, between Fifth Avenue and Park Avenue, 57 percent, or 285 of 496 apartments, including co-ops and condos, are vacant at least 10 months a year. From East 59th Street to East 63rd Street, 628 of 1,261 homes, or almost 50 percent, are vacant the majority of the time, according to data from the Census Bureau’s 2012 American Community Survey.

“My district has some of the most expensive land values in the world — I’m ground zero for the issue of foreign buyers,” said State Senator Liz Krueger, whose district includes Midtown. “I met with a developer who is building one of those billionaire buildings on 57th Street and he told me, ‘Don’t worry, you won’t need any more services, because the buyers won’t be sending their kids to school here, there won’t be traffic.’ ”

The developer told her that the buyers basically would never be here, Ms. Krueger said. “He said it like this was a positive thing,” she added. “You can’t make this stuff up.”

Well as far as providing services, that is a positive thing. As far as keeping cost of living reasonable, it's not.
Posted by Queens Crapper at 12:10 AM

Lower the city's income tax and make up for it by raising the property tax.

The pic is a bit misleading. It isn't the older buildings that are mostly empty -I live in such a place, it is the newer edifices that are ghostly, even a decade after being completed.

Go to Chelsea during the day and look at all the obviously empty condos in the towers built over the least 12 years.

A few blocks east of me on third avenue & 79th st is a new condo tower that bragged of being sold-out before it was even topped-off. Four months after it was available for move-in, there a only a few windows lit at night.

Earlier this year a City official stated that "around 47 percent of new condos were foreign owned".

Clearly, this is another scam by the developer-real estate industry. A bubble that will burst and we plebes will be told that we must bail out these cynical bastards when foreigners dump these places en-masse.

That is an excellent idea - but only for the gazillionaires - not Joe Blow in the burbs!

This was starting to happen downtown in the 90s - entire buildings were dark all the time.

It's really a shame that actors and Paris Hilton-wannabees discovered the West Village - they never lived there and drove the prices way up.

All the great little stores went out of business - there wasn't enough of a local population to keep them in business and the new little-rich-girls were too stupid and boring to get them!

So annoying...the new mayor hasn't done anything to help either. Building affordable housing monstrosity' s isnt the answer either. Look at the iconic Domino Sugar Factory now a pile of ruble along with other NYC history. Bloomberg's vision is full speed ahead with no stopping in site.

Increasing number of buildings around Queens Plaza are also mostly empty - word is that they are used as dorms by Asian companies in the tech industry where guys can sack out during 16 hour shift.

So much for Dutch Kills Civic "bringing people into the community". Nice work Mr Upzone Stamatiades.