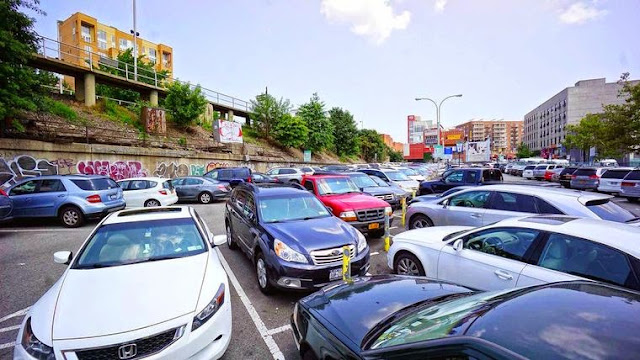 During a recent quarterly meeting with concerned parties, members of Community Board 7 demanded input in the review process for development of Municipal Parking Lot 3 in Downtown Flushing.

Bids on the mixed-income, affordable housing complex planned near the Long Island Rail Road station were due earlier this month to the city’s Department of Housing Preservation and Development.

Agency spokesman Eric Bederman said a designation of the winning plan is expected in the first quarter of next year.

But CB 7 members want to offer their input before a decision is made. Chuck Apelian, board vice chairman, said it’s not enough to review the project when it comes up for a public Uniform Land Use Review Procedure hearing. “It’s a done deal by then,” Apelian said.

The site is located on 41st Avenue near Main Street. The 43,200-square-foot location abuts the LIRR and has 156 parking spaces. Plans call for an equal amount of parking to be retained.

The city envisions affordable housing across a range of incomes and community and retail space. It wants to rezone the area R7X, which allows for greater height and bulk, usually in a nine- to 13-story building.

The project was first announced in 2010 by former Borough President Claire Shulman as a Transportation Opportunity Development project to make the LIRR more accessible to affordable housing.

As part of the project, the LIRR will add elevators and modernize the station next year.

The city has since linked the project with Willets Point to find an alternative site for affordable housing since it has been delayed at the Iron Triangle.

About 872 affordable units were planned for Willets Point, but they will be delayed for years and may never be built at all.

Is anyone surprised at the bait and switch? Willets Point was *never* about affordable housing.
Posted by Queens Crapper at 12:29 AM

Is anything a politician says actually about what theyre doing or intend to do ?

By the time the politicians stop winking and nodding at developers, there won't be any viable city controlled property left.

Sell off the crappy property held by HPD in undesirable areas to give that area a boost.

The shame is that there will be need for city controlled/owned property some day for schools and other taxpayer needs (not affordable housing).

Unfortunately, some day the DOE will have to pay big competitive bucks to some development company in order to open a much needed school.

It seems that whatever valuable city parcel a large development company points their pinky at is a done deal.

What the hell! Parcels used to be sold at auction.

Some very valuable properties were gifted out and they weren't even for sale.

Chuch Apelian must be making a buck off this too. Kelty can be found at the local gin mill crying in his beer that he does not score the loot that Chuck usually gets.