The following 2 shots were taken in September 2013, from Google Street View: 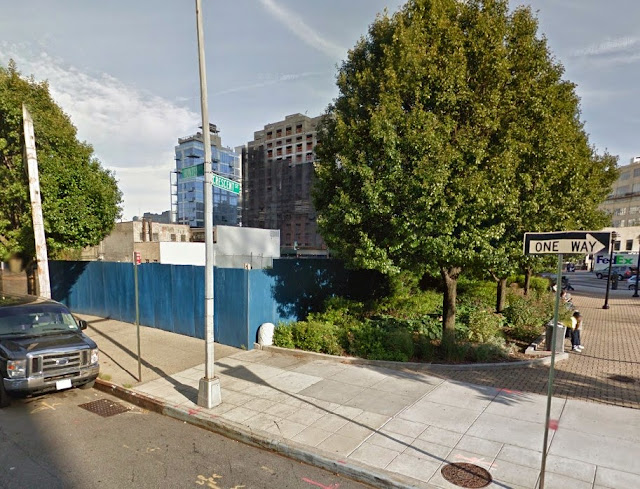 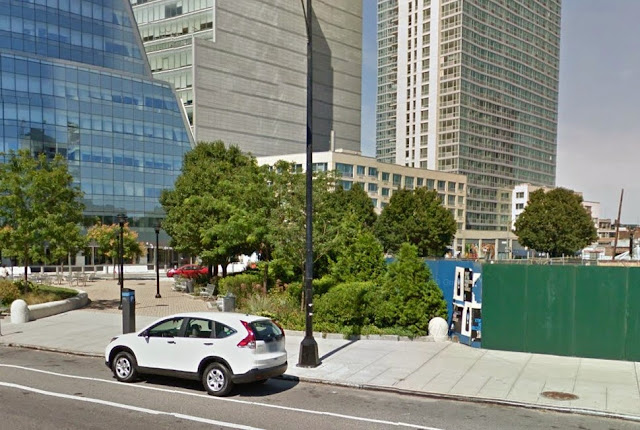 "Hello, next time you're in LIC, take a look at Rafferty Triangle park at Jackson Ave/44 Dr/ and Hunter St. About 2 months ago, the massive construction site next to it put up a construction fence around its site, 43-25 Hunter St, and extended the fence into a large part of Rafferty Triange including an area with several benches. My gripe: Why can this private company (Rockrose) take away a relatively brand new park and sitting area? I notified 311 and got nowhere. Thanks for the help!" - Dan

So, I took the bait and headed over there. This is what I found: 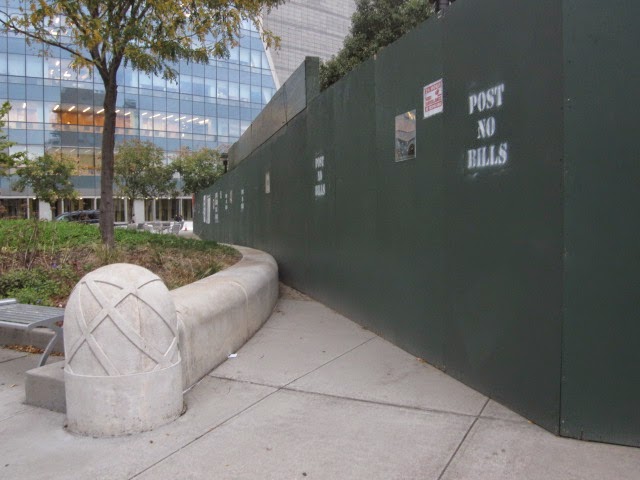 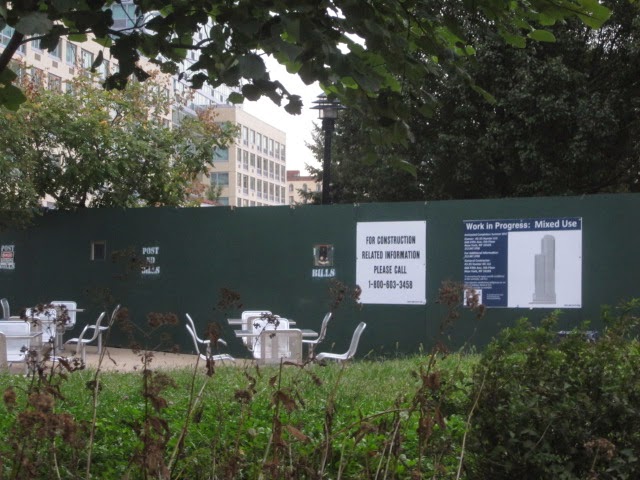 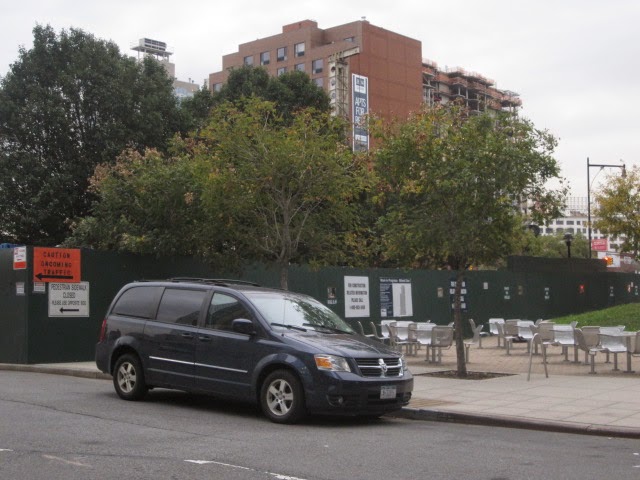 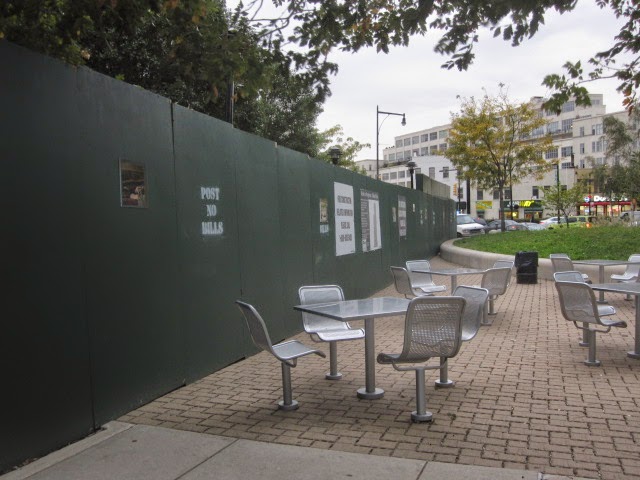 And then I looked through the construction fence: 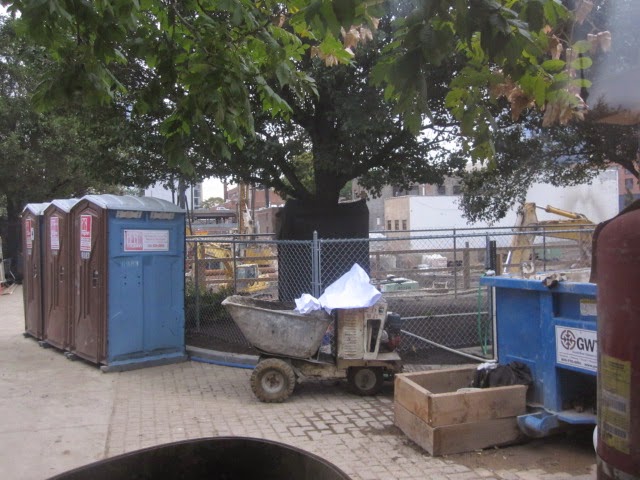 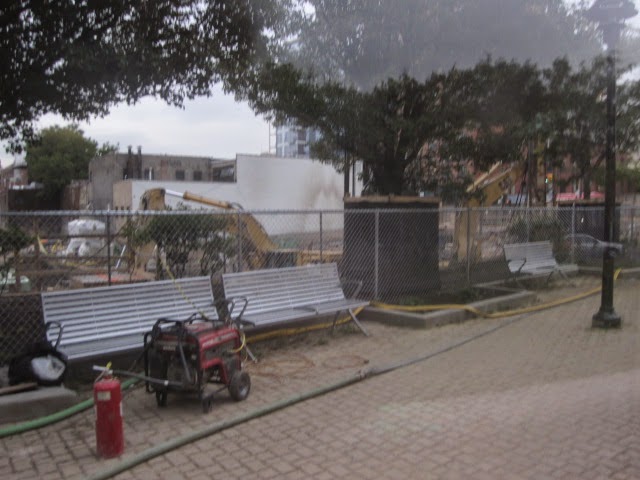 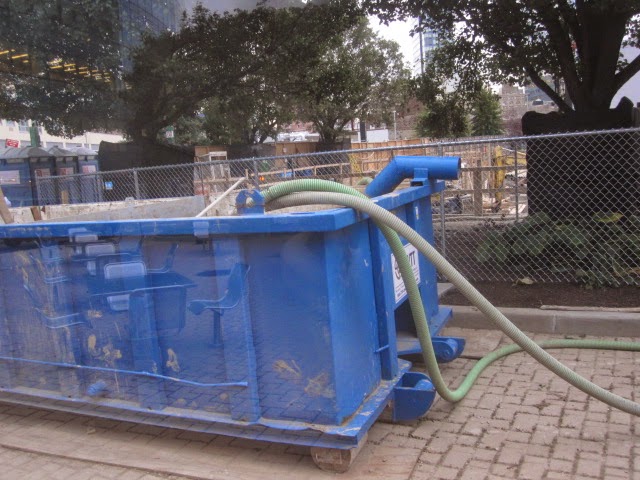 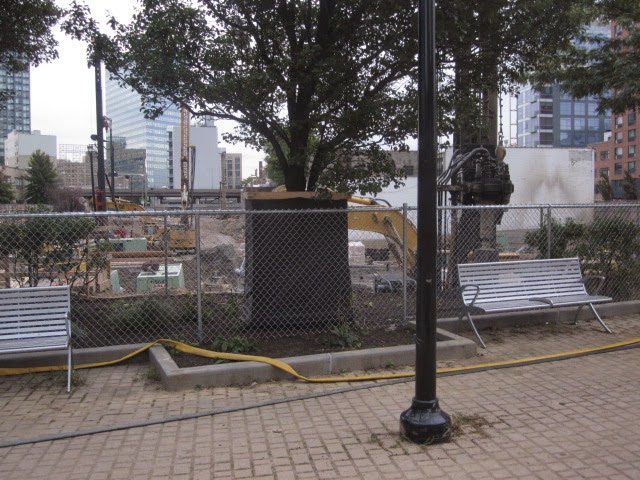 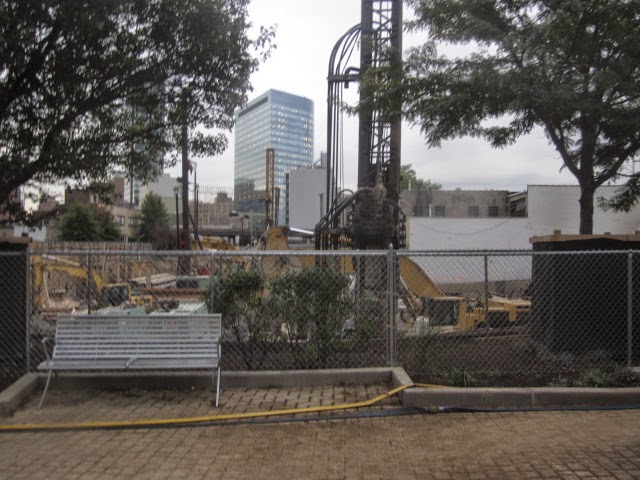 This is all bad, but hopefully temporary. The saddest sight of all was the monument to Capt. Malcolm A. Rafferty, which has been vandalized. 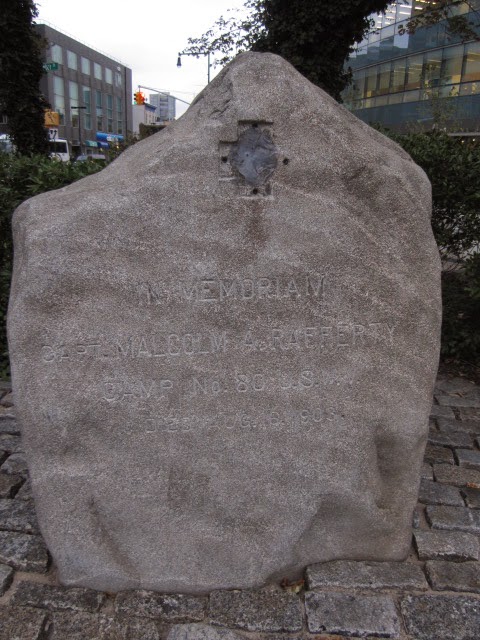 It apparently has been left in this condition for a long time, as it is pictured this exact same way on Parks' website.

In Queens, nothing is sacred except the rights of developers. Not parkland. Not memorials to our dead soldiers.
Posted by Queens Crapper at 12:20 AM

Look at the Queens Plaza Millstones, all the politicians, EDC, City Planning sided with George Stamatiades against the community to keep the original millstones in Queens Plaza.

George was removed as library trustee, so their faith was well placed, no?

Press has covered the millstone abuse with graffiti, chunks chipped off, their use as a bed and as seating.

The Q102 bus jumps the curb and runs within a few feet of them.

Jimmy Van Bramer cut funding and does not talk to anyone who tried to stop it. Community Board chair suggested things would be fine if they were moved to the center of Dutch Kills Green. The head of staff of a local politician, when alerted over the issue did not understand what the big deal was. She then bragged she was never in Central Park.

There is no adult one can talk to over these things in Queens.

Get the press involved though, just posting it here is not enough. Any way we can make those responsible blameworthy is a positive step.

God knows there is no longer a community that can fight for anything in Hunters Pt.

Development has made it a dead community.

Any comment from Councilman JVB? His "husband" works at the League of Conservation Voters. Why isn't he speaking out on the loss of parkland?

He will get involved only if this has a negative impact on development.

If not, try getting through his new handy dandy phone system that announces his position on city council and little else as you drop your message into a bottomless void.

Lived in Queens all my life. I never even knew until now there was a Capt. Rafferty monument.

Does anyone have an idea of the design that was on the stone? I'd like to see if it can be replicated in a material that isn't desirable to metal thieves.

I think this may be a replica on the Tilly monument. Will have to check it out.

Official parks image of the monument shows it defaced....

Not at all surprised that this memorial was vandalized since most of Long Island City is being carted off to landfill. A few pathetic tokens, as the Gantries and Pepsi sign were retained as quirky items whose purpose was to sell real estate.

Indeed, the community board as well as the councilman petty much view anything remaining from the neighborhood as things that will succumb to the intense market forces that they had a big hand in unleashing.

The Seniors can be shepherded into one big facility like Sunnyside Senior services, and local youth into the Y - both places geared to maximize Jimmy's photo op opportunities but not places that can sustain what is left of the community.

On the other side of the coin, self imposed problems, like losing sleep because you move next to a train yard, or solving problems we never knew existed like tying traffic together between Astoria and Hunters Point or the installation of those bike lanes, are all tied to development.

Other new problems, like living on a toxic brownfield or putting dense housing that will be flooded on a regular basis next to waterways polluted with sewage and industrial waste, is being ignored.

Note that effort during Open House NY to link all the waterfront cultural groups with real estate offices.

The bottom line is Hunters Point never asked to be a backwater, forces outside their community made them that way. And they were happy and no one felt that they wanted anything different.

Its when outside real estate developers thought they knew better, and took advantage of the local politicians who did not understand they were being manipulated, or did not care to see what they were selling out their own communities, that we have what we see with this post.

A community destroyed with nothing to replace it - just soulless dorms that owe more to Eastern Europe under the Soviets than Battle Axe Gleason and the days when LIC ruled Long Island.

I have lived in LIC my entire life. It's so sad how the community has changed and there's absolutely no regard for any type of history. Don't even get me started on JVB. He's the biggest hypocrite there is. It's a shame he's still in office.

Parkland? You gotta be kidding! Whew are so bereft of real parkland that is properly cared for in Queens, that every patch of minuscule gree is called parkland.