Wills tries to be a bigger bum 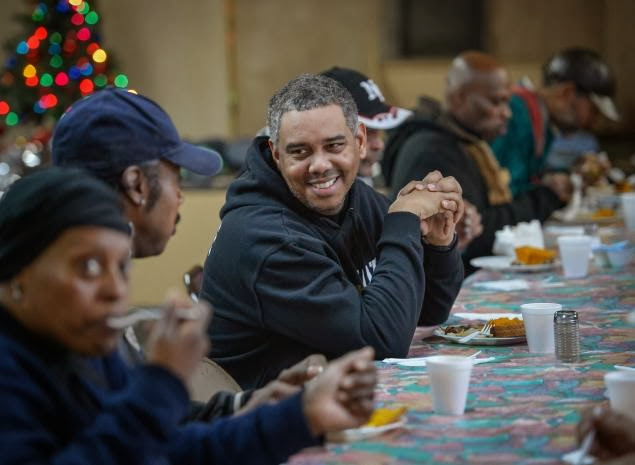 That raggedy guy earning tips by pumping gas at the Gulf station on North Conduit Ave. on Tuesday was no homeless bum. He was your councilman.

Jamaica lawmaker Ruben Wills made $14 manning the pumps at 150th St. — part of his self-guided three-day odyssey as a “homeless” man.

Later in his “humbling” day, Wills (D-Jamaica) lunched at a local soup kitchen and was set to sleep incognito in the Staten Island Ferry Terminal.

Over the next two days, the married father hopes to navigate the city’s shelter system and get medical care without insurance or identification. He’ll bag groceries for tips on Wednesday.

“I needed to experience homelessness to really properly advocate for the homeless population,” said Wills. “The whole objective of this experiment is to find out where the city has weaknesses in terms of providing services for the homeless.”

Being homeless, even for just a few hours, was a life-changing experience, Wills said, citing how people would walk away from him when he laid down on a bench inside a bus shelter.

Ah, so the council member fell for the old stereotype of what a homeless person is. Most are not "raggedy bums". But I love the political stunt. I'm sure the homeless population in your district is now 100% behind you after you told them to take a hike a few years back.
Posted by Queens Crapper at 12:03 AM

this guy is another shameless bastard elected because of voter indifference.You don't need to act like a bum to bring attention to the problem.Its been a festering problem for the past 100 years in this city and escalated under Bloomberger.

How about we get a stinking drunk,suit him up and elect him to city council so he can show the public what its like to be a corrupt lawmaker like Ruben Willis.

Boy, talk about a big publicity stunt that pretty much will garner very little attention and does absolutely nothing except waste three days of tax payers money.

I mean exactly what is the point of this graduate student thesis by Wills. This has been done for years by actual reporters who did week long stories on this and stayed on the streets longer than three days.

Wills, a questionable and just another in a long line of useless and do nothing local Jamaica politicians, is going to play “homeless” like some little girl plays “house”.

Here is a suggestion: How about playing Councilman, something that you get paid very handsomely to do and you can start by cleaning up the community of Jamaica of all its garbage, especially in your district. Start with that horrible section of South Road, which you and your cronies are changing the name to Tuskegee Airmen Way, which is an insult to those brave men, naming a street know for prostitution, shootings, crime, drugs, abandoned homes and garbage after them.

So Jamaica, the worst community as far as quality of life in Queens and Councilman Wills decides to play Willie the Hobo.

What a fucking asshole, as if Wills was not already an asshole to begin with, this just kicks it up a couple of notches.

I LOVE the idea of allowing a homeless (or someone from the lowest socio-economic strata of our fair city) to be council member - hey, why not mayor, too? for a day. BTW, the guy in the photo is way too clean, and his teeth are in good shape - no way could he "pass"

Anon stated: BTW, the guy in the photo is way too clean, and his teeth are in good shape - no way could he "pass"

Hell, he barely passes as a councilman.

So how much crack per day will he smoke, and how many bottles of rot-gut will he drink?

Its a lot harder to get people to tip you for pumping gas and bagging groceries when you are strung out and yelling slurs at people.

He has a very Hollywood vision of what most homeless are like.

“I needed to experience homelessness to really properly advocate for the homeless population,” said Wills.

So when Ruben Wills was deciding whether to vote for or against gay marriage, did he sleep with a guy?

Too bad he has pneumonia now