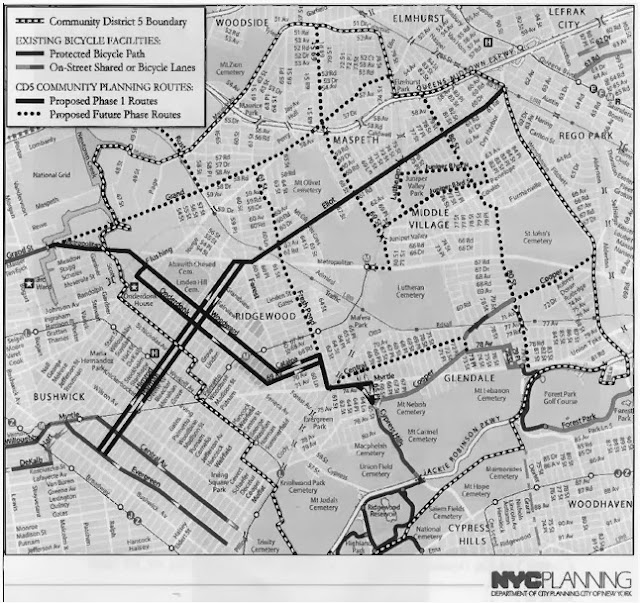 Kristina Schmidt stated sharrows would be painted in the center of each lane to encourage bicyclists and drivers to safely share the road, but some in attendance suggested that would be impossible given the narrow nature of the roadway.

“That is dangerous to walk, it’s dangerous to drive,” said Robert Holden, Board 5 member. “You have no place to go. It’s a long stretch, and it’s hilly. If a bus is coming in the other direction, it’s narrow to begin with.”

“Metropolitan Avenue and 69th Street is a much safer route,” he added, stating the section of Eliot Avenue between the cemeteries “is an accident waiting to happen.”

Public Transit Committee Co-Chair John Maier, however, stated bicyclists are riding through the narrow segment of Eliot Avenue presently, and that establishing the road as a bike route would help make drivers more aware and, thus, more careful.

“They’re already using it, and all you’re doing is really trying to make it more aware that everybody’s got a right to the road,” Maier said. “You’re trying to discourage them (bicyclists) from being on the sidewalk, making it less safe for pedestrians, and making them do the right thing by riding in the road.”

Two committee members who stated they were regular bicyclists— Mike Fordunski and Donald Passantino—indicated they found the narrow portion of Eliot Avenue too dangerous through which to ride.

“I’d rather go down Grand and Metropolitan avenues,” Passantino said. 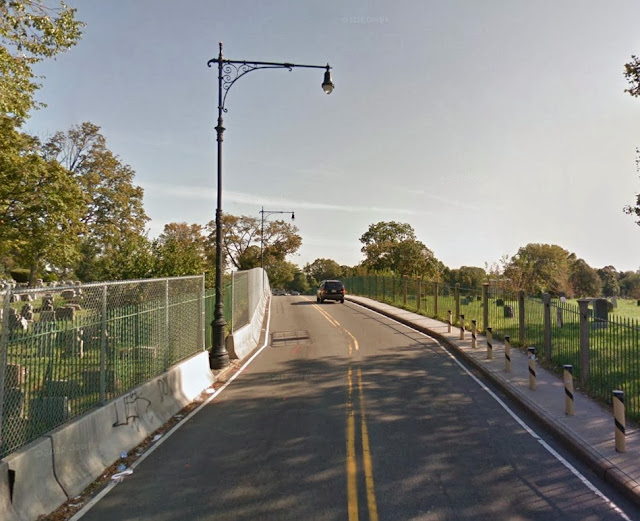 I've been down Eliot frequently. I can tell you this: the few bicyclists that I've seen go that way use the sidewalk. And quite frankly, I can't blame them. Take a look at the above photo. The road is only one lane wide on each side, and there is only a sidewalk on one side, which actually has bollards in the middle of the curved section, making it inaccessible to wheelchairs. But why should DOT listen to a sensible alternative? What the hell do community board members know? And if you don't like their take, then chew on this...

I asked a bicyclist named Dave that I was in contact with to tour the area back in 2011. This is the report he sent me:

"After taking Eliot through the cemetery I had a little chat with someone from TA about that "proposed" route, which was nothing short of deadly (not to mention a HUGE hill). He said that it wasn't suggested to use those roads now and that future use would depend on design studies. There is no design in the world that will make Eliot safe through the cemetery though. The road is too narrow for cars as it is, and the "sidewalk" must be two feet wide.

Eliot to 69th to Grand isn't bad though."

That could be a great bike route between the cemeteries. Just make it a one way street for motor vehicles, set the other half for a two way bike lane. Would be great.

Of course, a one way street. Because isn't used by emergency vehicles or anything. You should go work for DOT.

It sounds like the road should be closed all together.

Let's take a trip back into the early 20th century. There once was a street call Way Avenue that went from Mt. Olivet Crescent to 69th Street which I believe was called Juniper Avenue. In about 1910 or 12 Lutheran Cemetery decided all on their own to close Way Ave. and fence it across at Mt. Olivet Crescent. If you drive down Mt. Olivet toward Metropolitan Ave. you'll see an indentation in the Wrought Iron fence where the cemetery did their dirty work. The local Florists along the Crescent knocked the new fence down and the next morning it was up again with armed guards protecting it. And so Way Ave. was no more.

However, get hold of an old city map from the 1960's and earlier and you will see that Way Ave. re-incarnated as 63 Ave. Still existed! Thievery pays.

The current Eliot Ave. was busted through the cemeteries in the late 19230's to make it easier to get to the 1939 Worlds Fair and to facilitate the overall growth of that section of Queens.

"The current Eliot Ave. was busted through the cemeteries in the late 19230's..."