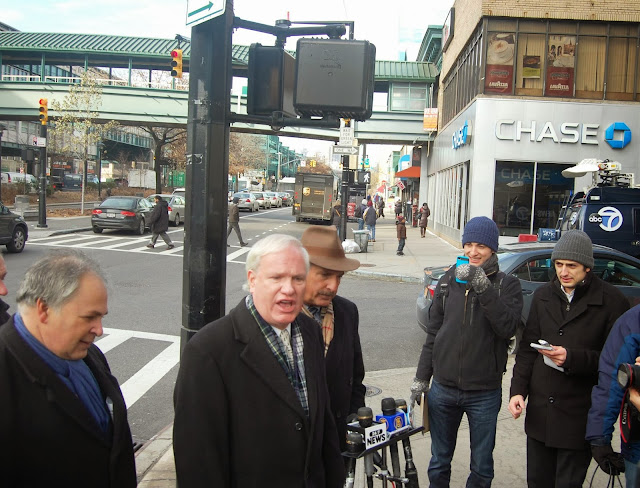 (QUEENS, NY) Senator Tony Avella was joined yesterday by Assemblyman David Weprin, the Queens Civic Congress, and the Queens Chamber of Commerce at a press conference announcing legislation Avella will be introducing in the State Senate that would prohibit the installation of tolls on any bridges controlled and operated by the City of New York, which include the East River bridges.

The imposition of tolls on the East River bridges, including the Willis Avenue, Third Avenue, Queensborough, Williamsburg, Manhattan, and Brooklyn Bridges is not a revenue generating option that the residents of this city should be forced to endure. Such tolls would place an unfair burden upon Queens, Brooklyn, Bronx, and Manhattan residents who would be forced to pay to travel between the Boroughs. Given the always increasing cost of living in the City and with constant bus and subways fare hikes, city residents are in no position to again face another huge increase in their daily living expenses.

Avella stated, “Despite the ever present need for additional revenue, the imposition of tolls on the East River Bridges is not an acceptable revenue generating option. Adding tolls to any of these bridges would have a devastating effect on working and middle class families and small businesses. Everyone agrees that we need to address traffic congestion problems throughout the city, but the first step has to be improving mass transit. That is why I will be introducing legislation to prohibit putting tolls on these bridges.”

Assemblyman David I. Weprin, (D-Fresh Meadows) stated. "I am proud to join my colleagues and the community to support Senator Avella's legislation which would ban tolls on the East River Bridges. The addition of tolls on the East River Bridges would take away much needed income from working families and local businesses. There are other ways we can raise revenue without financially burdening workers who have to commute to work to support their households."

“Any plan to impose tolls on the East River Bridges is merely another revenue generating plan, not a traffic-reducing plan. It should be the responsibility of the leaders of the city to find ways of increasing revenues without placing the fiscal burden upon those who can least afford it,” concluded Avella.
Posted by Queens Crapper at 12:39 AM

If you can afford a car in Manhattan then you aren't some poor slob. Suck it up and pay. Or take the train like the rest of us.

I would be okay with a toll on the other bridges only if they ones on the Whitestone and Throgs Neck were significantly lowered.

Geez!
Does Senator Avella ever spend more than a few hours up in Albany?

Nobody pays attention to his press conferences, because his fellow legislators are crooks and resent his honest positions.

There'll be EZ-Pass AND cash lanes?

Can you imagine the chaos if a driver forgets where he put his EZ-Pass transponder?

Also, Queens elected officials: the tolls will be collected on the Manhattan side of the bridge...right?...right?

i'm for the bridge tolls but only if they build out the subway in queens and brooklyn. they just spent almost $10 BILLION in the last decade to dig new tunnels under manhattan and want to spend more on the second avenue subway which does nothing for parts of queens and brooklyn with no mass transit and driving the only option to go to work

They can't even design one of the bridge's off-ramps correctly. By whom and how would a toll plaza be designed?

BTW, I use that off-ramp all the time. 3 sets of rumble strips. Speed warning signs all over the place. Barricades at the bottom. So? One ignorant, speeding driver (probably drunk) gets killed and a store window gets broken. What? Once every 2 years? Collateral damage. Live with it.

The problem, George, is that when the dopey drivers have accidents, they often involve pedestrians.

The plan these polls are fighting would lower tolls not going to Manhattan's CBD. Driving the Rockaways or the Bronx would get cheaper. No way to get to work other than drive? Drive/be driven/taxi/bus to LIRR or subway. Express buses cover a lot of ground too. If you choose to live far from your job that doesn't mean you have some right to drive there for free. Move closer or get a job somewhere else. Cash lanes? No. License plate readers. If you don't have EZ-pass they'll mail you a bill. Not necessary to slow down, shouldn't matter where they put the readers. You want more subways? Then you're going to get single family homes with large yards in the outer reaches of queens and brooklyn replaced with apartments and the density you find around just about every subway stop. And you need the money to pay for it. Could help to get the billion or so that this tolling plan would generate.

This is...what?...the 3rd notorious incident here? The drivers keep hitting the same spot on the block over and over again. The exact SAME spot. The existing barricades are 3-4 foot high weenie concrete blocks. So make the barricade bigger there. How is another re-design going to get peds from getting kilt?

Senator Avella, the one politician who knows the definition of "public servant".

One hell of a leader.

Thank You Tony! You are one of the last politicians fighting for the middle class in this city, especially in Queens were we are usually forgotten.

The next step should be eliminating the tolls on the other bridges in the city.

Bullshit! Photo Op, Nothing will get done except Weprin and Avella will get their pictures in the papers.

There's already a huge jam on the "free" bridges every weekday as it is because people are trying to avoid the tolls. What they burn in gas idling and going under a more efficient speed than the roads to the "free" bridges allow offsets a lot of the toll avoidance.

One option that Avella might have floated would be to give an EZ pass discount to commuters who pay property tax or own businesses within the 5 boroughs in exchange for balanced fares across all the bridges and tunnels. The real goal of the commuter tax is to hit the out of city folk for using our services and not paying for them.

The others have their photo ops with elites, celebrities, or illegal aliens.

This has the support of the middle class? Most of whom don't drive over these bridges, at least not on a daily basis? Why would that be? The majority of the city would be better off under the Schwartz' fair toll plan that they're campaigning against. Cheaper to drive to the Rockaways, to Northern Manhattan, to the Bronx, to Staten Island where transit options are lacking. Less traffic to the currently free bridges, so neighborhoods near them in Brooklyn and Queens have fewer cars cutting through to save a few bucks.

Also this is a bullshit photo-op since the state already needs to approve any plan to toll city bridges. This legislation is redundant.

"The problem, George, is that when the dopey drivers have accidents, they often involve pedestrians."

Yes, and if you looked at the accident numbers involving pedestrians across the city, you might realize that the problem is not the ramp.

And if you looked at the accident stats in that location before and after the revamp, you'd see that the problem IS the ramp. Let's stray off topic some more and not talk about tolls.

I see most of the cars going over the Queensborough bridge with only one person in the car or suv. By adding tolls you will see more drivers doubling up thus reducing the amount of cars driving over the bridge. This will save fuel, improve air quality and decrease traffic throughout all of Queens. Then you can return the second outer roadway to a bike/pedestrian way encouraging people to walk and ride bikes.

Tony says "no" to everything.
So, in turn, his fellow lawmakers say "no" to his proposed bills. Tit for tat is a nasty game.

Unfortunately "cooperation" (or political collusion) is the game if you want any laws passed.

Senator Tony Avella is correct. It will not reduce traffic over that bridge. We'll have unicorn-only lanes before that bridge is not congested.

It's just another scheme to take money out of the pockets of people.

Making all tolls the same would reduce those who drive longer to avoid tolls. But in exchange for putting tolls on free crossings, they should reduce the existing tolls so as to be revenue neutral.

If you want tolls on the Kroch, then move the Javits to Jamaica