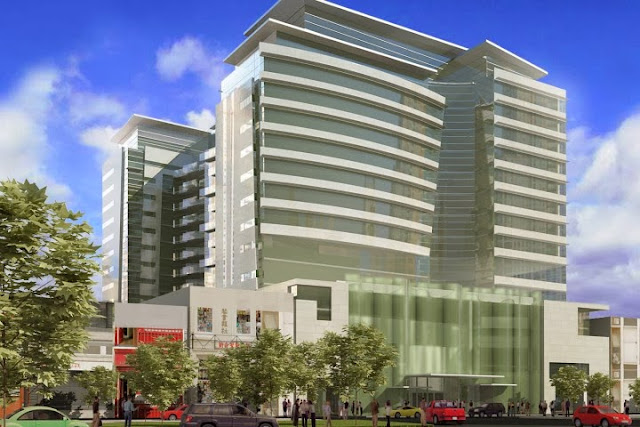 The fabled but long-shuttered RKO Keith’s cinema building in Flushing, NY, has been sold to a well-heeled developer for $30 million, The Post has learned.

The deal climaxes a 25-year saga of scandal and failure by previous owners of the Queens building.

New York-based JK Equities, headed by Jerry Karlik, plans to build a 17-story, mixed-use apartment tower on the site at 135-35 Northern Blvd. at the corner of Main Street.

The plans conform to city approvals granted years ago to a prior owner, Shaya Boymelgreen, and later amended for another owner, Patrick Thompson — who sold the property to JK Equities, which is experienced in redeveloping properties with historic character.

Newmark Grubb Knight Frank Capital Markets senior managing director Kenneth Zakin, who worked both sides of the deal, said, “The building, vacant for over 20 years, is the development linchpin of northern Flushing, and its rebirth will eventually drive growth for the whole area.”

As much as I'd like to see this place cleaned up and made into something useful, in its current state, it represents all the corruption that Queens has had to deal with over the past 30 years or so. Someone should put up an historical sign in front of it to tell the tale.
Posted by Queens Crapper at 12:29 AM

We needed our Congressman to bring federal funds to restore RKO Keith to its glorious past. Ackerman did not care enough to do it, and apparently neither does Meng now.

I always had a faint notion that Michael Nussbaum-- who claimed to be "representing" Patrick Thompson--was overly boastful about Thompson's ability to develop the property according to plans.

I guess that my suspicion proved to be correct, and that (maybe) Thompson bit off more than he could chew.

Pardon my candor, but this is now the 4th owner de jour, who intends on building a mega-project here. Will it happen, and when?

Always optimistic--let's see what materializes in the new year.

One thing is for certain--the increase in the value of this piece of real estate since 1986.

Not bad for Thompson. I believe that he made about 10 million dollars on the sale, less his expenses.

It appears like the real overwhelming "success" of Flushing, is the real estate manipulation that's been going on for 3 decades!

The RKO Keith's property has been flipped like a pancake at "I-Hop". Uh--that's another story, because "I-Hop" (further east on Northern B'lvd.) has also been sold.

I await CB 7's view on this most recent event.

Our Committee to Save (rather, what's left of it) The RKO Keith's Theatre of Flushing Inc. will remain vigilant as we have since 1980-82.

Perhaps something good can finally be salvaged from the tangle of intrigue, political betrayal, corruption and destruction that's been part of the Keith's saga for far too long.

In the meantime,--a sincere wish--happy holidays to all. May good health and good fortune follow.
Note: the Keith's opened its doors on Christmas day in 1928.

We are always available to serve our community regarding this historic site, and look forward to attending any meetings, etc. where we can be of assistance.

As we have said many times, this site is "the gateway to Flushing". Currently, it's a sorry shame!

All that effort to save RKO down the drain.
Developers win; preservationists lose. Again.

It was our past Congressman, Gary Ackerman, who partnered with Huang in screwing the Keith's.

He was tight with Tommy Huang...and is said to have even accompanied Huang on an illegal fundraiser in Taiwan.

Now we have Taiwanese-American, Grace Meng, who is the daughter of a convicted father...sitting in Ackerman's seat in far away Washington D.C.

Where will the federal funds come from?

Certainly Congress Member Meng isn't interested in much...except maybe remaining in her seat until she retires on a fat federal pension.

Let's hope that the tattered remnant of that once grand theater will become the lobby of a new building.

The Keith's would be here today, in all its glory, save for one most treacherous cur.

If borough president, Claire Shulman, would have acted on the community's request, back in 1986...to restore the Keith's original FULL LANDMARK DESIGNATION which Donald Manes had cut down...to include only the grand foyer and ticket lobby...we would be looking at a very different Flushing.

Now it's Flushing down the toilet.

LOL!
Meng, AKA "La China", is as geographically distant from Flushing as her thoughts for it are.

Uh...were you part of that "effort" to save the RKO. or just another armchair glumbler?

It doesn't sound like you're much of a "winner" yourself...perhaps a whiner!

I can concur with that "cur" reference.

Claire Shulman did, INDEED, reject resubmitting the Keith's theatre for the full interior designation to the NYC Landmarks Preservation Commission in 1986 that it well deserved.

In fact Shulman lobbied for her boss and mentor, Donald Manes, at the Board of Estimate to have the original Keith's landmark designation rejected.

So, I ask you.
Who is the most guilty party--Tommy Huang who acted as the Shul-Manes' administration's wrecking ball--or those who should have protected us from the likes of Huang--namely Donald Manes followed by Claire Shulman?

I'd call Shulman a most "treacherous cur" myself.

Let's look at the vast difference between Brooklyn and Queens, when it comes to preserving the historical fabric of the boroughs.

In Brooklyn, borough President Marty Markowitz is presiding over the restoration of the grand Loew's Kings theater.

And if CB #7 really gave a damn, it would have been gung ho about the RKO!

They went through the motions while warming a bench.

"Their perennial excuse:
"As of right". Well, that kind of attitude is as of wrong!

So, who is here to give a f--k about American history?

Restore a once glorious movie palace, for who?

The Chinese failed to support their own College Point storefront Chinese opera company.
It closed, belly up.

The final curtain has fallen on the RKO show.

It was a jolly good show while it lasted.

R.I.P. Now it gets ripped down.

What do we have to do to depose La China? She's so useless.

Tear it down and build a 12 story Fedders building. Take all the massage parlors, spas, body shops in Flushing and make them move in with their rent-a-skanks. Then blow the freakin' place up and start over again.

Meng doesn't want elective office to be her life. A couple of terms in congress and then a federal judgeship for life.

JK Equities won't follow the approved plans. I'll bet they've got their own amendments in mind.
The whole mess will wind up going back to CB#7 where it will be held up for 2 more years.

CB#7 hamstrung Boymelgreen from developing the site 2 owners ago, with their FAR and parking restrictions. How come CB#7 let every other developer get away with these same restrictions, Chuck & Gene?

Honestly...it seems like CB#7 has been out to facilitate Flushing's failure from the get-go.

What you see today in Flushing is what CB#7 approved! Do you think that conditions stink?
Well, the buck stops there!

I'm so sorry to read this - it was a relentless fight - particularly from certain individuals - and a great effort on the part of many to preserve this important piece of Flushing history and to create a cultural venue.

Huang should be tied to a chair and have bamboo chutes driven under his fingernails.

So sad that a community, residents and preservationists have been fighting for almost 40 years (give or take) and not one elected official/community board member has heard or helped this theater. That also shows you they don't want to do anything positive for Flushing. The integrity and character of Flushing as a community and neighborhood is almost completely gone. It's not want the residents of Queens wanted but the greedy pockets of all elected officials in power. So basically that's what QUEENS politics can do for you...NOTHING!

Funny how Ackerman served fifteen terms in Congress, and Meng has yet to finish even her first term, and yet people want her to accomplish more in one year than Gary did in thirty. If she didn't care about the community, I guess she wouldn't have been involved in the fight against the new airplane traffic patterns/noise pollution.

As Jerry Rotondi said, "Will it happen, and when?" - I'll believe it when I see it.

The artist who drew the picture forgot to include the rusty, balconies filled with brooms and crap that are a must have in Flushing real estate.

But the artist DID remember to use the must-have Asian lettering on the store signage. Jeez.

I remember walking in main street back in the early 80s.....ahh...the memories of flushing I had......then the asians came and messed up all of flushing, especially huang and his convicted criminal family! They need to have their licenses taken away indefinitely and they should all be deported back to taiwan or wherever they came from!!

I'll take this moment to repeat what Senator Toby Stavisky had said about the RKO Keith's Theatre--when Thompson bought it from Boymrelgreen--who bought it from Huang.

"It's been sold more times than the Brooklyn Bridge".

Flip, flop--flip, flop!
Is this the wind up of the pancake flipping vaudeville act? We'll see.

Quote from Peter Koo "I am happy that new developers are in place and we appear to be moving forward. This plan will make downtown Flushing more attractive and transform this eyesore into something the community needs".
What a disgrace and a joke!! The RKO Keith standing as it is right now looks better than most of downtown Flushing. Peter Koo considers it an eyesore, I can point out hundreds of eyesores in Flushing and the RKO Keith wouldn't be one of them. He's an idiot and only cares about Asian Flushing. He doesn't want to improve or make Flushing attractive to open it up to other ethnic groups. He just cares about his pocket and destroying any beauty left in Flushing. There are still gorgeous buildings and houses in downtown Flushing. Most of them are covered up by a million Asian signs and ugly storefronts. People can't even recognize or see their beauty. Clean those up (not knock them down because the beauty can't be seen) and make Main Street and Roosevelt more attractive and look like a village again! That is what would make some progress and restore the dignity of Flushing again. It would also attract more people other than Asian. Up to 40 years ago or so downtown Flushing looked a million times better and one ethnic group is to be blamed. Not that I'm saying it in a racist way but it is the truth that they butchered the whole area. Not for the better but for the absolute worse. The main culprits are the politicians and community boards involved for allowing it. We need leaders of change in Flushing!