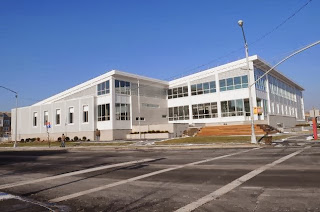 The facility was built as part of the Arverne-by-the-Sea urban renewal project. The funding came from the developers, city officials and private dollars.

“We’re building a community in Arverne,” said Gerry Romski, project executive for Arverne-by-the-Sea. “The Y is a very important component.”

Owners of that community will get a free one-year family membership, he said.

Correction: The funding did not come from city officials, it came from taxpayer dollars. And offering free membership to the people who can most afford it isn't elitist or anything. Funny thing is, the last we heard, this place was supposed to have opened this past June and the total cost was $25M.
Posted by Queens Crapper at 12:15 AM

A Rockaway politician had stated that everyone in Rockaway was eligible for a one year free YMCA membership. Now this article says it's only the people in Averne. I would not be surprised if the gang controlled NYCHA housing projects were put in that mix of the endless freebies.

The HPD/DHCR (NYC & NYS) funded Averne by the Sea Development is using the YMCA as bait to lure the unsuspecting gainfully employed into an area that is very far from Manhattan and engulfed by NYCHA housing projects, 3/4 houses, assisted living facilities -home to convicted felons and sex offenders who can't live anywhere else. And who don't pay taxes on their drug sales, prostitution, gun sales and loan sharking.

The new people of Averne by the Sea won't know that following Hurricane Sandy, this section of Rockaway and Far Rockaway was the Wild West - extremely dangerous- robberies, burglaries aka looting and yes, unlicensed guns in the hands of criminals. There was no electricity and no street lights, perfect setting for perpetrators To date, no one has removed unlicensed guns from the drug dealers/gang bangers.

You didn't read that in the papers because there is a black out on the real news in Rockaway.

Word on the street is to avoid this YMCA because it's going to be stacked with drug dealers, gangs and violence. And that's just the staff.

They had employment ads on Craigs List six weeks after holding interviews in a school auditorium in Far Rockaway. The ads were just dummies to make it appear that the hiring process was not biased.

After the opening hoopla, the Rockaway YMCA will make the news again. For gang shootings.

A large part of the funding came from the developers of Arverne-By-The-Sea.

The only way you can make Arverne attractive is to get rid of the two project houses that lie right in that area. Then the city insisted on building a new coop building around there. The city builds all of these "affordable housing" projects right next to projects. ...I feel as if the government is trying to tell people who make 50000-60000/year that they also belong in the projects!

They didn't build the new co op. It's an old building they're trying to up the rent on. Not all the gangbangers are gone. don't worry the area is surrounded by NYCHA projects.

The developers of Averne by the Sea are getting government money from the Dept of Housing & Community Renewal- a state agency, Housing Preservation & Development. HPD, A city agency & the Empire State Development Corporation that would just as soon take your house away by eminent domain to erect crappy over priced junk multiple dwellings.

This means that Averne developers ie scam artists are using your tax dollar to develop private property, same as the various scandal ridden co ops in the neighborhood.

Without heavy subsidies, this would be a "mini-Detroit" in New York City. And even with the subsidies, I can't imagine this becoming more than another colony of New York's unemployable dependency class.

This is who will be working at the Rockaway YMCA. (notice how the blacks and Dominicans, abide by agencies with all these initials such as NYCHA, HRA, CPS or CJS? A white person doesn't even know what they stand for!!
http://www.nydailynews.com/new-york/queens/queens-man-freed-prison-monday-killed-friday-article-1.1334943

putting race,stereotypes and the criminal element aside,this is an attempt to gentrify the rockaways like they did in the formerly bad neighborhoods in brooklyn and LIC.Even after Sandy destroyed the beaches and even though there will not be a boardwalk there in 3 years,there's a plan to make it into some sort of convenient resort for the hipster doofusses so they won't have to go to the hamptons.

even the organization has a highend type name,averne "by the sea" when it should be called averne in the hood.

With all do respect, not everyone who reside in what you call the projects or hood are delinquents. I for one still reside here as I am finishing up my graduate studies. Yes many people are comfortable in their circumstances, and have no aspirations to make change for the better, but there are still many other's who are trying to make something of themselves and create a better life than that of which their parents gave us. Please remember that Rockaway has been slow in developing, and every time a door is closed or an opportunity for change is limited, violence will continue to rise. Please check your sources before you judge what you clearly have no knowledge about.

What is going on here is simply gentrification. I saw it all happening from the first day. Old houses from beach 36 and above knocked down and replaced with two family homes. These homes came ready made on the back of 16 wheel trailers. The building of those mass produced over priced 2 family at beach 73. Now a new management has taken over ocean village, they are now pumping millions of dollars to renovate that project with a subsequent 50% increase in rent. Its just the old gentrification game that's being played out here.