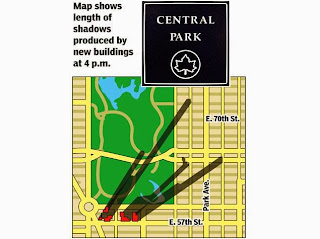 A new generation of mega-tall skyscrapers being built along 57th St. for foreign billionaires will cast a long shadow over New York’s premier greenspace, a new report shows.

"It’s troubling that the sky's the limit when it comes to one of our most precious public spaces," said Vin Cipolla, president of the Municipal Art Society, which conducted the report to highlight the need for oversight of development around parks.

"We need to protect these spaces," Cipolla added.

The shadow report reveals the worst-case scenario — every Dec. 21, the winter solstice, the sunless zone will extend 20 blocks into Central Park and reach the Lake and Ramble.

Every Sept. 21 at 4 p.m., shadows would stretch a dozen blocks — as far as Sheep Meadow and the Naumburg Band Shell near the 72nd St. transverse.

The skyscrapers in question are rising “as of right,” meaning the public has no say over their size. Developers are able to build so high because they bought air rights from neighboring buildings — and technological advances now allow for the construction of super thin mega-towers on small footprints traditionally suited for 40 story buildings.
Posted by Queens Crapper at 8:08 AM

The first Skyscraper on record was the Tower of Babel; according to the book of Genesis, Ch 11 (King James version):
"And it came to pass, as they journeyed from the east, that they found a plain in the land of Shinar; and they dwelt there. And they said one to another, Go to, let us make brick, and burn them thoroughly. And they had brick for stone, and slime had they for mortar. And they said, Go to, let us build us a city, and a tower, whose top may reach unto heaven; and let us make us a name..."

I'm all for protecting the parks atmosphere, but the times when the shadows are at their worst, in the winter, is also when the park is least used.

Nobody is laying out in the meadows working on their tan on Dec 21.

Manhattan wants us to worry about their shadows while they say nothing when their USTA takes Queens parkland.

Not only shadows, but air flow around CP is already affected by these architectural nightmares.

The view of the Empire State building down Seneca ave at sunset is horrible due to all these towers.
The skyline from Highland park/Vermont place is even worse ---all flatop shitboxes sticking up blocking everything

"every Dec. 21, the winter solstice, the sunless zone will extend 20 blocks into Central Park and reach the Lake and Ramble"

It was always my understanding that the "Habitues" of the Ramble would rather conduct their activities in the dark?

If this is a major concern for anyone New York City, it's clear that don't get it.

My favorite street in New York is Pine Street between Broadway and Nassau.

the depiction in the graphic looks like 2 raised middle fingers.
these shadows seem to hit madison and park aves where the lesser wealthy live,so it suddenly becomes a NIMBY issue.


All these buildings,including the tower that's going up on 56 and park and the 4 downtown at the WTC,are all homages to Ayn Rand's the fountainhead.

besides billionaires and Cuomo's recent proposal to cut taxes on "small" businesses,there is no true benefit for the working people of the 5 boros.All this does is say fuck you and like it to us and I guess the terrorists who want to destroy these buildings(idols,maybe)and "take away our freedoms

if there is some justice left in this town,it would be that these buildings become abandoned,and become graffiti art projects for the 5 pointz crew


some bible quote:
you reap what you sow

And who would those people be?

Considering how a mess most of Queens is with quality of life issues, garbage, over-development, etc, this should be filed under "Who Gives a Shit". If Queens was given a third of the thought that Manhattan gets by Bloomberg, then maybe I would care some, but as it stands, DEAL WITH IT.

Who needs more sun? It causes melanoma. Less sun-bathing in the parks is fine with me.