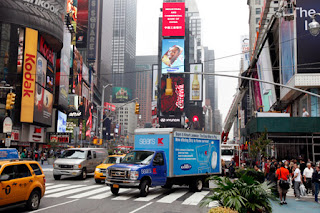 Researchers say they have found a way to get trucks off clogged New York City streets during the busiest parts of the day, and they are hoping to use the same approach soon in other U.S. cities.

A two-year experiment that paid customers, such as shops and restaurants, to receive their supplies at night worked better at changing truck delivery times than previous attempts to discourage daytime deliveries by raising tolls during peak hours, said lead researcher, Jose Holguin-Veras, a professor at Rensselaer Polytechnic Institute.

For city residents, a widespread shift in delivery times could make a huge impact on traffic. There are 7,000 restaurants in the city, Holguin-Veras said, each receiving several shipments a day. Moving those to nighttime would be equivalent to moving all of the traffic generated by the city’s ports. Better-flowing traffic reduces air pollution, too.

The professor hopes that the program’s success in New York — regarded as the most difficult destination for trucks in the U.S. — shows it can work elsewhere, too. The federal government is promoting research in other U.S. cities, and the work has attracted international attention, too.

In the New York program, the incentives for businesses went beyond money, Holguin-Veras said. Night deliveries are more dependable than daytime deliveries, for instance. That allows receivers to order less, because they do not have to stock up in case the next delivery truck comes late.

Truck drivers are less likely to get stuck in traffic, pay less money in tickets and tolls and complete their routes faster. Night stops are typically only 30 minutes long, compared to two hours in the daytime.

Sounds like a logical, low-cost way to take care of this problem.
Posted by Queens Crapper at 12:47 AM

Worked for rome too.

It will be great in commercial districts. It's not so great in residential in the summer unless the drivers agree to lower the volume on their radios and STFU!

I'm for it but living near a small grocery store I can tell you that deliveries are really noisy and the workers are just as bad as the refrigerated trucks!

SANITY PREVAILS... (or will the tTeamsters?)

Plus what would help traffic in Manhattan especially in the 30's is to make those streets 2 lanes instead of 1. They're wide enough.

Not good. This would force business owners to have staff and security arrive early to take deliveries. They would have to hire more staff and eventually have to close down their business. This is all a plan to push out smaller businesses so that developers can swoop in and build luxury apartments. It's so obvious. It has nothing to do with traffic congestion.

I've been saying this for years, but i'm sure the 3x OT rates from the union workers (both shippers and recievers) would be costly.

"I've been saying this for years, but i'm sure the 3x OT rates from the union workers (both shippers and recievers) would be costly."

You're just talking out of your ass.

Costs could be a headwind for both shippers and receivers to buy into this program, but that will depend on how employees are shifted. If there's a dedicated night shift, no overtime should be required - for either party.

Night time deliveries are easy because not many companies are doing it. If you get the majority of deliveries shifted to night time, you will still have a congestion and parking problem, in addition to noise complaints.
And you can be sure the city will bring in an overnight shift of traffic cops to make sure that ticket revenue stays steady. The city can't give up that cash cow.

Dee Richards, RIP, was the one who came up with the idea. We should also have construction at night. Also mandate any new or rennovated loading bays be underground to avoid double parking.

You could use the new Amazon drones. AFter all they use drones at night to read our meters

We should also have construction at night.

Let's hear your tune when they are jack hammering you street at 3 am.