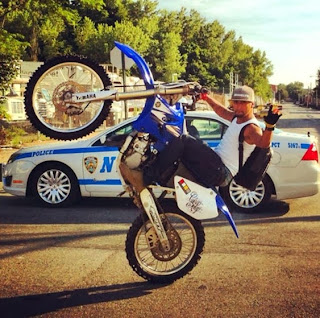 New legislation targeting rogue motorcyclists in the wake of the vicious beatdown of a Manhattan man in front of his wife and baby daughter will be introduced in the state Senate on Monday.

The bill will apply in the city only, not the rest of the state.

“While the brutal assault caught on video captured the world’s attention, aggressive and reckless motorcyclist behavior in upper Manhattan has been a persistent quality-of-life hazard in our community for years,” Espaillat said.

Rule-breaking bikers have been a particular nuisance in his district because it includes parts of the West Side Highway, FDR Drive, and other major routes.

The first measure would stiffen penalties for a group attack by bikers.

The second would make it illegal for bikers to do stunts like wheelies in traffic.

“Anyone who thinks performing risky maneuvers in the middle of traffic is a good idea should have their license suspended so they understand their actions put lives in danger,” Espaillat said.

A third bill would require groups of 50 or more motorcyclists to get a permit approved by the NYPD.

And the last part of the legislation would shift the power from the state to the city to install cameras on roads. Currently, the state has the power to approve traffic cameras.

A bill was also introduced to increase penalties for those caught driving with suspended licenses.
Posted by Queens Crapper at 12:19 AM

I mentioned this once before here.

I was on my way to visit my parents on 9/29/2013. I was going South on the Deegan and was sitting on the off ramp by the McDonalds to go to the Willis Avenue Bridge when a group of at least 100 dirt bikes and quads filtered through those waiting at the light. They went on to the Bruckner. Notice that those who attacked the Range Rover all had street bikes. This was another group. I remember that day. It had absolutely great weather.

Does anyone know the time of the assault on the Range Rover? Based on my ezpass I guess that this group passed me at 1:50 pm.

They should also look into deportations as well, but we know they wont.

With over ten thousand less cops on the street since the late 90's and with all of these new counter terrorism units out there, and with a majority on IMPACT footposts for the first 2-5 years of their careers and with all the inside administrative positions that were created to fudge the CON-stat numbers, there aren't too many cops actually on the road anymore who will actually enforce these new lasw. Let's hope that Bratton comes in and totally revamps the Police Department and completely overhauls it from the Kelly Ivory Tower ego trip that it has degenerated into.

Mr Public Safety Vallone will soon be out of office.

Taggers and those looking up skirts can take a breather....

why no mention of the pedestrian that was killed on Queens Blvd and 58 st by one of these menaces the other day?
No need to crack down on that biker though; he's dead.

Isn't it also illegal to drive ATVs on NYC streets? But once the first snow flakes hit the streets in North Flushing, the a-holes on ATVs go speeding through the streets. One day, they're going to come face-to-face with a telephone pole...

I mentioned that accident in a post on Sunday. He actually had a green light according to the camera at that intersection.

Lock them all up and impound the motorcycles and phones for forfeiture. These new thugs uses social media and text to form these flash mobs.
Biker groups only come in 2 variety's:
Assholes or thugs !! I personally been in some street fights with bikers. Almost all these "unorganized street groups" wear big brass rings as knuckles and heavy sharp nuts and bolts to throw at motorists BTW. Always be ready and watch your back.
With these assholes its all about power, thrill & adrenalin.

Quote: "No need to crack down on that biker though; he's dead"
GOOD --one less on the road !!!

Isn't it already illegal to do a wheelie in traffic? Why a permit for a group of 50? Why not a group of 20 or 25? So the power of cameras transfers to the city and now the city has to pay for them and maintain then and monitor them. What a BS piece of legislation!

Why dont they start with the laws that are already on the books. For instance, who were all of the cops that participated in the motorcycle gang beat down of a defenseless motorest and why aren't they under arrest. Where's the internal investigation?

Complete lawlessness on the roads is a cultural thing. I imagine our soon to be progressive government will not be concerned with these matters, same goes for the Pennsylvania plates epidemic, I wonder how many hit and runs have these out of state plates

Another issue is these biker gangs drill out or remove the baffles & resonators from the mufflers.
The sound then disperses in every direction bouncing off everything.
Due to the high SPL (sound pressure level) and all the loud 360 degree acoustic reflection the average motorist or pedestrian can't judge the distance or direction the motorcycles are coming.
Result = accidents usually followed by death or fights.

I had both a Honda 70 and 750 both were big wastes of money. What useless uncomfortable, death contraption's on the streets of NYC.
This due primarily to all the bad driving foreigners and messed up streets. Drive 4 miles down Queens or Woodhaven Blvd without a full helmet & astronaut suite and your sticky & filthy.
WHY BOTHER unless you live in the sticks or desert out west !!

Hammer and carrot. Do a ticket blitz on these groups by setting up checkpoints (there got to be something similar to Compstat at 311). Open Orchard Beach, Citi Field and Aqueduct parking lots during off season for legal events.

will these laws be enforced?don't hold your breath.

these bikers have been showing off and causing obstruction for years,and knowing that a few dumb cops were involved in that highway mugging this summer just proves that other gangs have wannabe banger off-duty cops in them.

what I find disturbing,is that the swine who got caught participating in that beatdown was undercover infiltrating occupy sandy and wall street.Which shows you what kind of crime R Kelly was preventing instead of keeping the roads safe for commuters.Good riddance

Which shows you what kind of crime R Kelly was preventing instead of keeping the roads safe for commuters.Good riddance

I'm sure if there was a Middle Eastern/Muslim biker gang, Ray Kelly would have been all over them...