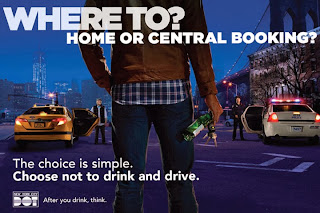 I'm going to throw a bunch of links up and allow you to make heads or tails of the data.

Could it be that fewer people are dying in car accidents because cars have been made safer for drivers and passengers and not because of Bloomberg or Sadik-Khan? Unless they are talking about pedestrians, which would make the following headline from the same paper more curious:

Elmhurst Hospital doctors say pedestrian injuries are continuing to rise in Queens" - Daily News. Quote: The hospital recorded 296 pedestrian injury cases in 2012, up from 275 the previous year and the highest number in a decade. Figures are not yet available for 2013. The hot spots for accidents in the area — Queens Blvd., Roosevelt Ave. and Northern Blvd. — would come as a surprise to nobody.

Bayside Patch reports that as a whole and compared to other states, NY state drivers are average.

Yet the NY Post reports that DWI deaths in NYC have - get this - doubled since last year. What's the deal with that? We've had DWI education programs in place since the 1980s...

Drunk driving aside, the observant among us have seen pedestrians, bicyclists and motorists all do stupid things and take unnecessary risks, mainly because everyone in this city is in such a damn hurry for some reason.

And then think about the series of really bad choices by various people that led up to this past Friday's tragedy and yesterday's deadly accident in Woodside.

Police have been cracking down on bad motorists lately, but it never seems to be enough.

This is complicated stuff, and no matter how "improved" things appear to be, there is still a lot of bad stuff happening, with plenty of blame to go around.
Posted by Queens Crapper at 12:49 AM

Hey, when is the real Crapper coming back? This site doesn't have the same vibe lately. You on vacation, Crapper?

In the most recent Woodside accident, it seems the pedestrian was at least partially, if not totally, at fault. Yet all we hear from so-called advocates is that motorists need to be punished every time they strike a pedestrian. Crossing with the light makes it much less likely that you'll get hit. It's also the law. All the safety measures in the world won't make Queens Blvd safer if the pedestrians don't observe traffic signals.

I'm not on vacation. Not sure why you think the site is any different than it's always been.

Agreed about the pedestrians being careless. But unlicensed drivers/drivers with suspended licenses also seem to be behind quite a bit of accidents. Maybe someone can work on an ignition lock similar to the BAC one that will only accept a valid license to open.

Parents are a major problem!!!!!

So the message they're sending to their kids is run like hell in front of moving cars. They also walk behind cars that are backing up!!!

Then there are the older Asian ladies of Flooshing that cross WITHOUT looking up at all!!! Are they trolling for a lawsuit?

Whatever happened to all the public education programs that existed in the 1960s?

As a kid I KNEW not to litter or cross against the light. Everyone thinks they're above the law these days. The driver here suck big time but the pedestrians are just begging to be hit!

There was also a video of an accident recently where a woman waited for the walk signal, started crossing, and a van made a left and ran her right over.
http://www.youtube.com/watch?v=nvs3H0AoRzE

Careless or reckless driving is a serious problem that many of us simply accept as the norm. I see lots of it every day.

I'm surprised but glad to see you address this subject. I hope you do not censor any of the reader comments.
Cars are not evil, pedestrians many times ARE stupid, but nonetheless we accept way too much careless, reckless, and dangerous behavior from drivers on the road.

People are just more careless these days.
There is fault on both sides but when the 2-ton machine
hit flesh and bone the outcome is predetermined.

The back tire of the truck ran the kid over because the kid wasn't paying attention. An alert 8 year old should be able to avoid the back of a tractor trailer. The link above explains what happened.

I wish the city would begin enforcing the jaywalking laws on major roadways. When pedestrians are hit, many times it is because they are jaywalking across the middle of the block or against the light.

Cars are always blamed, but no one ever talks about pedestrians acting completely reckless.

Over 30 years ago, I saw a pedestrian stand about 3 feet into the gutter at the intersection of Northern and Broadway. Right across from AB Lewis Used Cars. It was a Friday afternoon, rush hour. The pedestrian appeared to be drunk and just stood out in the street there waiting for the bus. An eastward travelling car rounded the corner from Northern Boulevard onto Broadway. It hit the guy out in the street. He went flying UP into the air doing a backwards somersault and landed on his head. Waiting for the cops and ambulance among the horrified witnesses, I watched as the guy's face turned blue in the gutter. Some insurance/law firm investigator interviewed me at home for about 2 hours later about 2-3 weeks later. He paid me $50 cash for relating what happened.

A lot, lot happens in Woodside.


Kind of hard for what? The trucker to yield to a pedestrian in the crosswalk?

Bloomberg and his supporters will continue to cook the books until the second his term in office ends.

"He kept walking and went under the truck in the middle."

The kid walked into the truck and was hit while it was in the process of turning. The truck was already halfway through the intersection. He was run over by the BACK tire. I'm sure the trucker didn't see him until after it was too late. I don't know about you, but when a truck is turning I wait until it clears the intersection before I proceed. I don't run with my head down. Of course, if his mother and not his sister had been with him, it's much less likely that he would have done that.

The absence of an assigned crossing guard is what boggles my mind. It's Northern Blvd.

Where's the part where we can blame the bicycles?

The bicyclists share plenty of blame as well. I mentioned it in the post. EVERYONE in this city is in such a hurry all the time, it's insane.

Count up all the pedestrian fatalities and see how many were caused by bicycles. I'll save you the math, it's zero. But they share plenty of the blame, naturally.
Your bias shines through as always.

Count up all the bicyclist fatalities and it's a lot. And a good number of them will have been caused by their own stupidity, inattentiveness, recklessness and/or their perceived invincibility.

You seem to think bicyclists are better than everyone else. Newsflash: they aren't. And it has nothing to do with my "bias".

I guess you didn't read the post thoroughly. Or you read what you wanted to read.

Whenever you try to have a reasoned convo about traffic safety, an a-hole bike rider always has to interject that bikes don't kill people, motorists kill people, which totally doesn't help anyone, but I suppose makes them feel like they contributed something important. As if everyone in the city is suddenly going to take up biking to work. Then the ad hominem attacks about how anyone who has the audacity to criticize bicyclists or Janette Sadik-Khan is biased, etc. It's so predictable it's laughable at this point. You'd think they'd try some new shtick. Can't wait to see what their tack is during the DeBlasio admin. They all voted for him.

Thanks for posting this, crappy. There are accidents every day, and most of them are preventable. I don't know why in a city known for dangerous and voluminous traffic, people would take such risks, but they do. There are signs up all over Queens Blvd warning people to cross cautiously, but there are way too many people who do not take heed and end up as stats. It's sad. And I think we need more checkpoints for motorists to make sure their licenses are valid.

There is a crossing guard stationed at the next intersection....thus is where school children are told to cross.

Bicyclists voted for deBlasio? Any of them who did probably spent too much time on their bike, not enough time listening to the new mayor speak. He's like Cuomo, he's a driver. His windshield perspective will cost this city. He won't give the much needed attention to the walkers, bikers, and transit users in this city. The next several years will be a dark time for anyone not in a car.

These hipster transplant cyclists are the worst. They think their tough and ride aggressively because they think being here since 2009 makes them a real New Yorker. But they just end up getting themselves killed by their own fault from riding recklessly, not by fault of the motorist. Although the drivers don't face criminal charges, they get everything taken from them in civil court.