Bloomberg wants us to remember all he's done 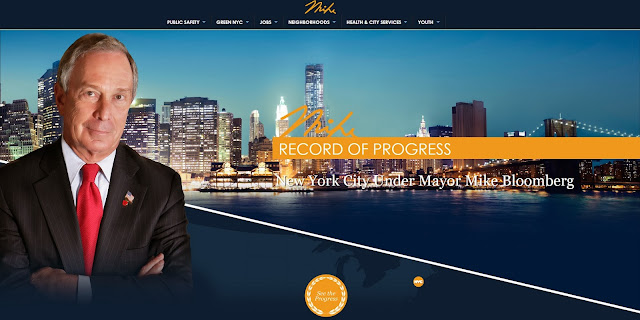 Today, Mayor Michael Bloomberg revealed how the administration plans to highlight his legacy during his final 15 days in office.

In a memo entitled "T-Minus 15 Days" sent to administration allies both inside and outside of City Hall, Howard Wolfson, Bloomberg's deputy mayor for government affairs, unveiled a new website detailing the progress the city has made under the outgoing mayor and said that "starting tomorrow the Mayor will visit each of the five boroughs over the next five days to highlight key Administration initiatives and success from throughout the last 12 years."

When will the Cathie Black and 2010 snowstorm chapters be ready?
Posted by Queens Crapper at 12:49 AM

You do not write your history

Oh yes, make the city completely unaffordable to most people, only Manhattan is part of NYC.

One more thing, low quality of living for high cost of living.

I guess there will be no chapter for Queens....

So which bridge will DeBlasio propose to rename as the "Bloomberg Bridge?"

Yeah, whatever. This blog still gonna be whining about Bloomey for next twelve years, Crappy? Or are we going to get serious about Bill Sandinista Duhblazio as he drives us back to the bad old days as fast as he and his union buddies, welfare queen buddies, and Al Sharpton can? Let us know how it's all going for you once he starts taxing the "rich" (those who make over $60K?), handcuffs the NYPD, and drives businesses away from all the boroughs. I'm sure it will all be fine, right?

Ironic that there will be snow when he visits the outer boroughs this time, too! Its true that Bloomie visits Queens each time he leaves town (the airports are here, after all), but this is a "special" visit to remind everyone in the outer boroughs of how much he's actually done for us. The last visit of this type was during his third election campaign (the term limits that voters twice voted in favor of to ensure no one stays in city hall that long which he and the rest of the council exempted themselves from). His most lasting contribution may well be his Mayors Against Illegal Guns campaign because it puts some real money against the NRA lobbying machine, not that Congress has done anything (yet) but a few lawmakers lost their elections because of it (for example, a white NRA "A+" candidate representing the South Side of Chicago lost her bid for that seat).

When deBlasio messes up, I will be right ther on his ass. This post is about Bloomberg. And we'll be living with his legacy for generations to come.

yeh - HE did all that? really - thanks to the middle class who FUNDED all his stupid projects~!


THESE are the bad old days.

I could not give two shits that some 3rd world elite that got their money by crapping over their people is living high on the hog in Manhattan.

I am concerned that there is a wholesale effort to displace the real New Yorkers in a way that the good old days could never accomplish.

I blame that on Bloomberg and the cosmopolitan elites and the 1% in Manhattan.

What a way to skew the numbers there, Bloomie!

Murder is down since 2002, because in 2001 all the deaths at the WTC were classified as murders.

The NYPD has fewer shooting incidents because the punishment is too high to risk unholstering your weapon.

Reduced rate of incarceration because cops are not allowed to arrest anyone because god forbid they might have profiled someone. *eyeroll*

You forgot his huge announcement for warehousing at flushing airport (2004 or so), his announcement that there would be public bathrooms all over NYC (I believe 3 were installed), his unconstitutional attempt to ban sugary drinks, his NYPD paying out over $1 Billion to settle lawsuits from fraudulent quota arrests, double digit rate increases on water without any pipes being replaced, his non-stop backing of Con Ed even after they left northwest queens in a blackout for over a week (forcing many food businesses into bankruptcy) etc etc etc.

His legacy is clear: Fuck you, I'm rich.

We get it Napoleon. Go enjoy your life on Bermuda and leave the rest of us the fuck alone.

Bloomberg's Legacy: Tripled real estate taxes, tripled water and sewer taxes, overdevelopment of our Queens neighborhoods, overcrowding by embracing illegals so our schools in Queens are 150 per cent capacity, used DOT funds for Bike Lanes instead of improving our roads, and let's not forget eminent domain in Willets Point. Just a few "highlights" of his legacy. I think he almost accomplished his goals. He came very close to driving the middle class out of New York. Let's not forget his ILLEGAL third term. Yeah, he can pat himself on the back. Some Legacy!

I will remember the thousands of homeless on our streets, freezing and begging, some with their pets, as hundreds of rich tourists walk blindly past them.

BLOOMBERG, THIS IS YOUR CRIME. YOU WILL TAKE IT WITH YOU WHEREVER YOU MAY GO.

No, 9/11 was not counted in the murder rate. Think and read before you speak.

"Yeah whatever" guy hits the nail on the head. Darkness is coming.

This is tangentially Bloomberg related.

About this pedestrian plaza in Ridgewood becoming permanent:

The "interpretive signage" that has been newly installed there is, I think, worthy of crappage awareness.

The topic of the signage is veterans, which is fine and not the problem. The problem is there are about eight or so of these signs along the sidewalk and they significantly block visibility of the half dozen or so storefronts behind them.

If I were a business owner, I'd be pretty ticked off. People on the south side of Myrtle now have difficulty seeing the storefronts across the street. These signs look to me like the kind of urban streetscape mistakes that were made all over the place in the 70s.

Check it out in person and see what you think.