Voting from beyond the grave 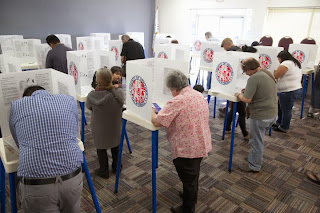 Investigators posing as dead voters were allowed to cast ballots for this year’s primary and general elections, thanks to antiquated Board of Election registration records and lax oversight by poll workers, authorities said.

The election board’s susceptibility to voter fraud by people impersonating the departed was uncovered during a massive probe of the agency by the Department of Investigation.

The probe uncovered 63 instances when voters’ names should have been stricken from the rolls, but weren’t — even though some of them had died years before.

So maybe we should have to show ID?
Posted by Queens Crapper at 12:43 AM

Common sense will tell you that in order to vote using a dead person's name or convicted felon's name one would have to know where they are registered and exactly what their name is.

DOI Commissioner Rose Gill Hearn was interviewed on NY1 last night. She made it clear that this was not about "voter fraud" but rather laxity and incompetence on the part of the Board of Election.

no we should not have to show ID

the BOE should be capable of keeping the dead off their records,but they are more concerned with discouraging people with baffling voter sheets that makes signing a contract for software easier to read.

Do we know if the votes were cast for the incumbents, and not for the challengers? will the list be made public?

As Thomas Nast attributed to "Boss" William Tweed "As long as I count the Votes, what are you going to do about it?"

The Democrats have a national stake in voter fraud, so the meaningless elections here in New York have a participation in it.

Of course we should show ID! Every other country requires it. Why would anyone oppose a Federal ID card - or even better - a Federal ID with optional driving privileges.

Get rid of redundant state-level government.

Of course there's fraud in voting....how do you think illegals vote? No id....They probably just take one of their friends or relatives name or they probably know some old person who doesn't vote and they vote for that person....that's why they should check Ids and naturalization papers.

Crappy, show ID like practically every other Westernized nation whom the typical gang bashing voter ID laws then go on to hold up as a model for other better models of governance?

"Common sense will tell you that in order to vote using a dead person's name or convicted felon's name one would have to know where they are registered and exactly what their name is. "

Yes, and common sense will tell you that the candidates purchase lists of voters from BOE and would have exactly that info. Factor in that most employees are not going to challenge signatures , and it's pretty easy to fix an election. This is why we should show ID to vote.

The BOE lists do not show that a person is deceased. They provide name, address, birthdate, voting districts, and last year in which the individual cast a ballot, so you'd need another list like the Social Security Death Index to cross-reference against.

I'd wager though, that some people (no clue how significant a number) have ballots cast in their names fraudulently if they routinely come out only for presidential elections, or not at all.

Of course the list doesn't show they are deceased. That was the whole point of the investigation. It's pretty easy to cross reference in excel. There also have been reports of people having shown up to vote only to have been told they already voted. This crap happens more often than the BOE would like to admit.

Can I remind everyone here that voter ID and the related poll tax, citizenship questions etc. etc. are typically used as methods to keep people from voting? A little American History reading should remind us that you need to balance voter fraud, of which there is little by most independent accounts, with the encouragement of all people to be able to vote without intimidation.

If the lazy people pretending to work at the Queens BOE would remove dead people from the voter rolls this would not happen.

Where I live, a former resident is routinely mailed NYC Board of Election notices & campaign/elected official propaganda. I send it all back with DECEASED written across the correspondence. The Queens Board of Elections can't be bothered to validate his demise. How disrespectful.

Blame the chief of each boro's Board of Elections. Then fine each one for every deceased person that remains on the rolls 90 days after their death.

As for the elected officials newsletters or campaign mailers, don't they have some sharp whippersnapper with a laptop who can rack up their intern hours investigating deceased constituents? I am not asking that they spend hours sitting in our fine and esteemed bone-yards.

The refusal to remove deceased voters in a timely fashion raises questions regarding fraud and who is financially benefiting from it.

Not all people should be encouraged to vote without intimidation. Only those legally registered.

And this is why we need a national ID card.

A little American History reading should remind us that you need to balance voter fraud, of which there is little by most independent accounts, with the encouragement of all people to be able to vote without intimidation.

Still, only 24% of the 4.3 million registered New Yorkers bothered to vote in November. Mr. de Blasio's 73% margin amounts to 17.5% of the voters eligible to choose New York's 109th mayor. Some mandate.

Yeah, maybe if the Democratic party starts canvassing Calvary Cemetery, and allows all the "undocumented" Democrats to vote in the next election they can drum up a little more enthusiasm for Comrade de Blasio!

"Can I remind everyone here that voter ID and the related poll tax, citizenship questions etc. etc. are typically used as methods to keep people from voting? A little American History reading should remind us"

More like a little technical and managerial education should remind you that we've ALREADY SOLVED THIS PROBLEM.

EVERY voter receives - mailed to him or her - a multilingual (*gag*) form with all of the information about polling places and dates. There is NO REASON why an official year-stamped paper photo ID could not be included in this mailing. Absentee voting, already uses ID. NY State now has successful STAR registration online with checks against their internal residential records, proving that much voting can be done that way as well.

Can I remind everyone here that voter ID and the related poll tax, citizenship questions etc. etc. are typically used as methods to keep people from voting?

Yeah, asking someone to show an ID in order to vote is like the new Bull Connor, or something.

So I guess asking for an ID in order to enter a high rise office building is like the new Jim Crow, or something.

So, some of you who disagree could explain why "voter fraud" campaigns are started only by Republicans in close margin states?
They must only be interested in fraud prevention and good government, and clearly not in making it difficult for given political, ethnic or racial groups to vote.

It would appear that several of those were not started by Republicans in close margin states. So stop talking out your ass.

To anonymous:
Be brave and use your name.
Yes we can find examples of fraud if we look. It is still not significant enough or pervasive enough to consider actions that limit the general freedom of people to vote. Go after the individual cases and prosecute, and let people vote without harrassment and restriction.
Isn't restricting the right to vote the first sign of dictatorship and repression? I figured a true American like yourself would think about that...

By the way, Happy New Year to all Queens Crap readers--great site, even if you don't agree with me.

How is asking people to bring down a piece of official paper they received in the mail along with their polling location and districting info restricting the right to vote?

How can a poll tax be equated to an ID? Who here doesn't have at least one piece of government issued photo ID?