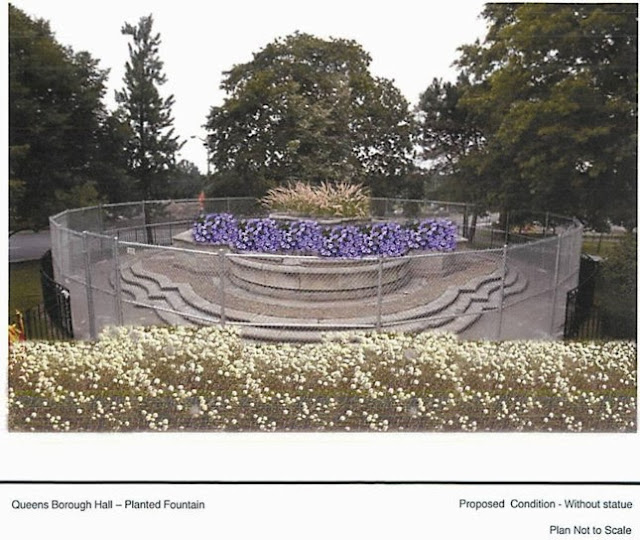 From Triumph of Civic Virtue:

Ever since plans to exile the Triumph of Civic Virtue statue to Brooklyn came to light, enquiring minds have wanted to know: What will replace the statue at its former location on Queens Boulevard?

On July 29, 2013, DNAInfo reported that Queens Borough President Helen Marshall was “in negotiations with the departments of Design and Construction and Citywide Administrative Services” concerning the future use of the Queens Boulevard site, but that “renderings that were presented to Marshall ‘were not acceptable to the borough president.’”

Thanks to a new Freedom of Information Law (FOIL) Request made by Robert LoScalzo (who has previously successfully sued the NYC Department of Citywide Administrative Services (“DCAS”) to obtain Civic Virtue records), now we know how DCAS intends to utilize the former site of the statue: As a “planted ruin”.

Records obtained by LoScalzo discuss the fountain that served as the base for the Civic Virtue statue. The statue has been exiled to Brooklyn, but what is left of the fountain base is still at the Queens Boulevard site. According to the records:


DCAS wishes to keep the original fountain as a planted ruin, a scenic backdrop to a busy and important intersection in the borough. … [T]he fountain, although left as a ‘ruin’, will be planted with grades and groundcovers and act as a landscape folly to enhance this prominent corner.


An artist’s rendering of the proposed “planted ruin” shows the fountain area closed off behind a cyclone fence, with wildflowers sprouting from the fountain and surrounding property.

Is DCAS serious? They’ve removed the colossal statue and artwork from Queens, and intend to leave behind a “planted ruin” to “act as a landscape folly”?

Who writes this stuff, and how dumb do they think we are?

Read the full prospective from the NYC Department of Design and Construction.
Posted by Queens Crapper at 12:55 AM

Hey, it beats that proposed "Great Harpies of Queens" monument.

where else on earth would our representatives propose that the site remain enclosed by a cyclone fence? and how much will we be billed?

In the case of Helen Marshall--air between her ears in place of brains! Thanks be that she's gone now.

The REAL BRAINLESS ones are the voters who put unimaginative (i.e. Marshal) and shady (i.e. Katz) pols in borough hall.

Pardon me while I puke up a hair ball that just got stuck in my throat..

All crap every which way you look.

Here's a novel idea for the base of a former fountain - a fountain.

Oops...somebody might think of placing a smaller version of that grotesque Queen Catherine of Braganza colossus that was supposed to be erected on the East River.

They should go with Helens original suggestion of a bird bath.

A suggestion for a bird bath from a bird brain.
Go for it! At least our wild critters would benefit.

queens,the graveyard in Brooklyn,and this entire city don't deserve a statue dedicated to civic virtue.Thanks to bloomberg and various other public servants for the past 12 years,they have made it irrelevant.

even the current behavior and attitudes of most of our smartphone diddling,coffee cup carrying citizens don't have a trace of virtue.Consider the last 2 elections only 20% of the population voted,civic virtue my shiny butt.

Our "elected" proved this by sending it to the graveyard,the truly virtuous thing to do would be to bury it.

I don't have time to find it,but Carlos Danger once had a press conference in front of the statue saying what a vulgar eyesore it was,not unlike his viral hard-on.(curse him for popularizing the selfie picture).At least Irony has survived.

and flowers,f#*k you,just throw white paint at the site.

This is the perfect spot to permanently install the "Bear eats man" sculpture, and why not dedicate it to Carlos Danger and the rest of the political class who proudly serve Queens.

Seems to me there's a "landscape folly" in South Jamaica. Just check out all the weeds of folly growing around the abandoned cars in Joe Moretti's photos.

Oooogaah! The friends of Van Bramer and Dromm.

Yes. It is one of the obscure definitions of "folly"

3. (Fine Arts & Visual Arts / Architecture) a building in the form of a castle, temple, etc., built to satisfy a fancy or conceit, often of an eccentric kind

It looks like a grave site for some "revered" past borough president. Maybe we should exhume Donald Manes and plant him there. This king of crooks deserves major respect.

Then the Helen Marshal Memorial Atrium can be used as as mausoleum for the future crooked borough presidents to be interred in.