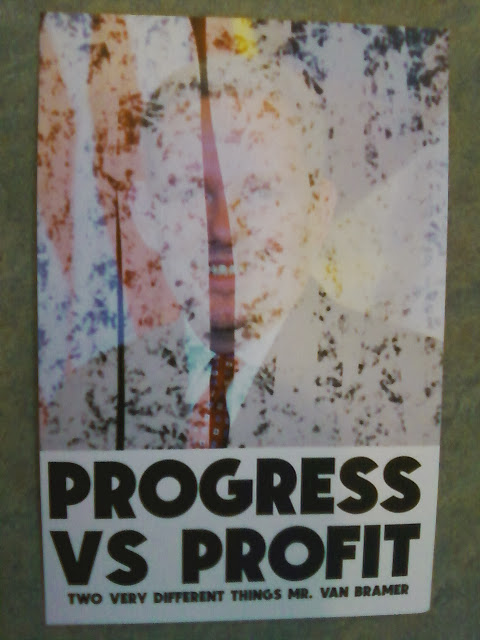 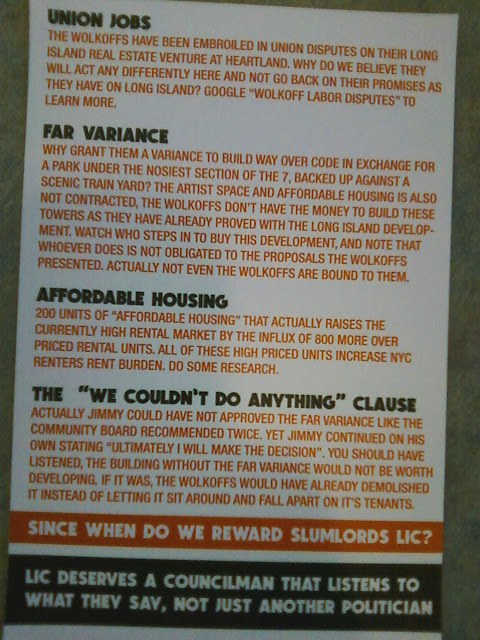 Enjoying your read, councilman?
You bite...politically speaking, that is!
What your particular orientation is has nothing to do with that reference.

Yessiree Bob!
Van Bramer took $10,200 in campaign contributions from the Wolkoffs.
He was bought for ice cream money, like so many of our other shady Queens pols.

I attended the city council zoning and franchise committee hearing, regarding the development of the 5 Pointz site.

I addressed council member Van Bramer directly--asking him to recuse himself from voting on Wolkoff's 5 Pointz project--since he received their political campaign contributions.

He voted in favor of it anyway.

Is this how a councilman represents his constituents?

Jimmy is in business to represent the developers who feed his political aspirations with money!

That was made perfectly clear by his vote.

It looks like councilman Jimmy has been outed for corruption!

Jimmy is as phony as a 3 dollar bill!

He claims to be a strong union supporter but has clearly betrayed labor on this.

After Jimmy is term limited out, what political prize has he got his eyes on, on his trip up the ladder?

Isn't the expression really, "Queer as a 3 dollar bill"?
No offense intended...just a correction.

LOL!
Jimmy should be good at listening.
Look at the size of his ears.
(It's Howdy Doody time).
Unfortunately his ears are tuned to taking orders from slumlord developers.

Now Jimmy's made enough dough to be able to afford getting his ears pinned back.

I hope some union guys picket Van Bramer's office, with that big blow up rat they always use.

For 20 years, particularly the last 10, Astoria, LIC, and all of Western Queens has been getting raped by overdevelopment. All we heard by activists and local politicians were crickets. Suddenly, 5 Pointz, the darling of the "art" community is targeted, and the activists come out of the woodwork. This same "arts" community are the useful idiots of developers. They settle into industrial, working class neighborhoods, making them more hip, attracting trendy cafes and acting oblivious to everything going on around them. After a while, rents start going up, and more affluent scum are drawn to the area, prompting the "need" for "luxury" apartments. Then the same "artists" who originally "discovered" the neighborhood and obliviously did the dirty work of the developers are priced out and sent packing, off to found their new urban colony.

The young hipsters go nuts over the rise of the right in Greece, drone attacks in Pakistan, but look blankly every time local issues that harm local people are raised.

But boy oh boy every new initiative that is a poor disguise for helping development i.e. waterfront or targeted transit initiatives - bike lanes the 'g' line - they are front 'n centa!

Gee whiz, I wonder who made that poster.

@jerry rotondi - You do know that the city DOES have an ethics commission. While they may not be particularly effective, maybe they would pay attention if enough folks complained about Van Bramer?

Density variance aside, neither Jimmy Van Bramer nor any other politician should block a property owner's right to do with his land as he pleases within the law. Bitch and moan all you want, the U.S. Constitution has not been entirely destroyed by your ilk just yet.

You're on the wrong blog, pal!

No one said that Wolkoff could not do what he wanted with his building except for the coalition that actually filed the TRO against the demolition. Wolkoff will rightly go down in Queens history as an art murderer. It was a good old fashioned protest and shaming, which little affected the reptilian sensibilities of the doddering philistine, but was free speech fair and square. How's them Constitution apples for ya'?

Get the picture, bub?
I think you're one of Jimmy's trolls.

Then it's time for you Mr. "20 years"...you lazy lout... to come out of the woodwork and back your complaints with action.

If you are JEALOUS of the attention that 5 Pointz has gotten lately...put on a harness and PULL YOUR OWN CART!

Print your own postcards and posters.

Oooooh...Jimmy is throwing a hissy fit and has his trolls posting. He's extremely brittle when it comes to criticism. Bitchiness is par for the course.

The city council usually protects its own, and I have little faith in the ethics commission.

I do have have a lot of faith in Queens Crap, however, to out the real truth!

I also think that whoever printed those post cards did a reasonably good job of letting the voters know what a shifty councilman they elected.

Bravo!! Whoever did these postcards is a genius! Let the message about Van Bramer be loud and clear. Shady crooked councilman.

Free speech is great. I said nothing about the posters. But the state should not be abrogating property rights any further. That's not America.

As for art murderer, don't forget the only reason there was a 5 Pointz is that Wolkoff allowed it in the first place. The artists should be grateful for the free ride they had there for a while. Not to mention that his plans call for a new spot for their spray paint.

Obviously. Only back then he couldn't make money off of the lot. If he were able to, it probably never would have happened.

Not to mention that his plans call for a new spot for their spray paint.
Nice try, but, a Maecenas he 'aint...

JVB owes all he is and all he's achieved to Assembly Member Cathy Nolan. if it was for her JVB would still be mastering the Dewey Decimal System. Can't blame the voters either he ran unopposed....Not that if there was an opponent anyone would vote for them, because in Queens its the Democrat way or the highway to Nassau County for another party choice. That's the reason that all these politicians do what they want because there is no fear that the sheep will ever turn tail and support someone other than a democrat. They take every voter for granted and take full advantage of their position to profit and manipulate. As for the people....Good luck! Hey look at who they voted into office for Queens BP? A home wrecking, liar that blatantly disregarded the will of the people by voting to extend term limits because SHE doesn't agree with limiting a politicians term. Even after the people voted twice to limit it to two terms? So you see, the politicians will continue to do what benefits them and their friends and fellow politicians because what's the worse that can happen? They'll get elected to a higher office when someone moves on or retires? the people have spoken and now you have to live with it! Don't blame the players that are in the game, blame the people that put them in the game to start with!