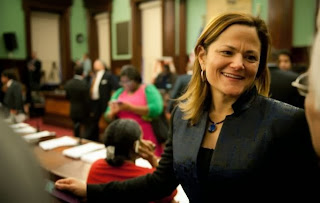 The election to choose a City Council speaker is three weeks away, but that hasn’t stopped allies of Democratic front-runner Melissa Mark-Viverito from celebrating.

In a move likely to rankle her detractors, Mark-Viverto’s political club has already begun organizing her “victory” party, the Daily News has learned.

Club leaders say the ascension of the East Harlem pol would be so historic — Mark-Viverito is vying to become the first Hispanic speaker — that a big bash is warranted.

A club official said Mark-Viverito is “in no way, shape or form involved in planning” for the party.

But Mark-Viverito has acted like the race for speaker is a done deal, even though the position will not be filled until all 51 Council members vote Jan. 8. 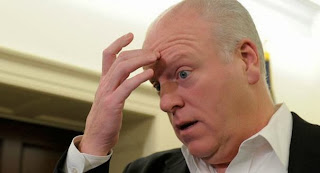 If this holds up, Joe Crowley's power will be seriously curbed. While I am not a fan of Mark-Viverito for her positions and the fact that we really don't need another Speaker who is a clone of the mayor, seeing the Queens Machine get castrated would give me much pleasure. Big losers would be: Costa Constantinides, Mark Weprin, Elizabeth Crowley, Paul Vallone, Karen Koslowitz and Rory Lancman.
Posted by Queens Crapper at 12:23 AM

Agree 100%, crappy. Don't like her, but the Schädenfreude is probably worth it.

Since they backed Paul Vallone for City Council the Queens Machine needs a good whipping.

See Joe, if you had spent more time in New York instead of Virginia, this wouldn't be happening. Enjoy your nightmare.

Why Costa? I thought he was part of the Progressive Caucus? Did he not pledge his support? If not then he's an idiot.

Rather the Crowley show than the Seddio show.

Costa is shaping up to be another Vallone cozying up to UCCA and that ilk.

Nice way to pay back the community that wanted something different....

Costa said he was going to vote with the Progressive Caucus, then backtracked and said he would vote what the Machine wanted.

Yea, we know. Everyone is watching what he is up to.

Big mistake to act like you are Vallone but not be a Vallone. Good way to lose control of a situation and get thrown by the bull.

The Brooklyn pols are the ones who hold the keys to the Speaker race - they were supposed to back Dan Garodnick, but caved under pressure from their Brooklyn buddy, de Blasio, as well as promises of plum assignments from Mark-Viverito. If you thought Quinn and Bloomberg were close, it's nothing compared to the way that de Blasio and Mark-Viverito will be - the Council will just be rubber-stamping everything the Mayor wants. Garodnick is trying to woo people back by pointing out that he will be an independent Speaker. Should be an interesting two weeks until the vote...

Thanks for nothing Joe. how about you hire another non American non English speaker at one of your offices so they can watch television all day and ignore the constituents except the ones who speak Spanish?

Thanks for nothing Joe. how about you hire another non American non English speaker at one of your offices so they can watch television all day and ignore the constituents except the ones who speak Spanish?
-----------------
Our councilmen are white and only listen to boys in the cement trade, gays, and ethnics.

This must come to pass.

Virginia Joe is losing his New York power. That's what you get when you don't live here and claim to help your constituents. You can't help your people if you don't know what their problems are. Stay in Virginia. NYC will ride the storm with the new speaker. Maybe she's not as bad as everyone thinks.

Good to see Joe (The Virginian) Crowley get kicked in the ass.

Joe, you turned out to be a real asshole.

Costa was already a part of the UCCA well before the 2013 election.

The ethnic groups he has shamelessly sold out to and pandered to over the last two decades are about to give Joe and his ivory tower machine a big shit sandwich to eat. Hey Joe, you used tham and they used you, sucked you dry and now they are done with you. Now they are going to toss you out on your ass in favor of one of their own. You lay with dogs....