Another Flushing municipal lot to be developed 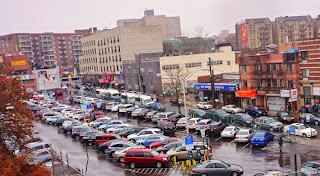 At what was called a “Community Visioning Meeting” on Dec. 18, officials announced that the long-evolving project to develop Municipal Parking Lot 3 in Flushing to provide affordable housing is moving forward.

Representatives of various agencies and several elected officials were in attendance at the meeting, but the public was noticeably underrepresented, owing, apparently, to the short notice and early meeting at 5 p.m.

The project aims to convert the lot, located at 41st Avenue and abutting the Long Island Rail Road station, into much-needed affordable housing, as well as providing commercial space, while maintaining as many of the 157 existing parking spaces as possible.

A still-fluid timetable, offered by the city Department of Housing, Preservation and Development, indicated that construction could begin within a year, with the actual work taking between 18 and 24 months.

In a presentation on behalf of the HPD, Director of Pipeline Planning Eunice Suh said the project’s feasibility analysis would begin sometime this winter. According to plans, the Request for Proposals would be released by the spring with the RFP submissions due by next summer. The RFP developer selection is expected to be announced by next fall.

One instrumental figure in the project’s development, former borough president Claire Shulman, who heads the Flushing, Willets Point, Corona Local Development Corp., said that the project has been discussed for many years. “Everyone agreed this was a great project. Here we are four or five years later. Better late than never.”

Shulman suggested progress on the project was “held back because of the EIS at Willets Point.” It was a reference to the challenges to the Environmental Impact Statement, a document that describes the positive and negative effects a proposed action could have, in that controversial case. “The city didn’t want another lawsuit,” she said.

“Our preference is affordable housing with the possibility for senior housing,” she said of the 43,200-square-foot-lot, citing requests from the Asian community which, she said, has faced suicides by seniors who found themselves with no viable place to live. “Affordable housing is a very important issue in Flushing, an absolute must.”

Along with the housing developments are planned improvements to the LIRR station. A representative said the LIRR is in the process of updating the “entire station environment,” including two elevators, both accessible from Main Street. In addition, lighting on the platform will be replaced. Also planned are new stairways and a new ticket office.

If the words "affordable housing" and Claire Shulman are involved, you know this is nothing more than a big tweeding project. Expect one of the usual suspect developers to get the contract.

IMPORTANT: This Claire Muni Lot 3 project (which has been gestating for years) is one of the two affordable housing projects that Julissa Ferreras touted on October 9 at the Council vote as concessions towards an approval vote of the Willlets Point / Willets West special permit. From the Council's press release:

"the Administration has agreed to release a Request For Proposals for two lots in Queens to construct additional affordable housing."

CB7 has since referred to one of them as Claire's Muni Lot 3 project.

In other words, they knew all along that the Muni Lot 3 project had been proposed and was in the pipeline (and only delayed, as Claire said, because disclosing it could provide more ammunition for lawsuits challenging the Willets Point EIS) -- and then Ferreras touted it as a concession resulting from her negotiations re: Willets Point / Willets West. More swindle.

After seeing all the garbage on the street there who in their right mind would want to live anywhere near downtown Flushing?

Anonymous one.....I know it's an Asian slum, however, I am hoping that these new houses will bring much needed diversity to flooshing. For many years, flooshing has been going downhill plus the Asians don't sell or rent anything out to non Asians....The most they will rent an apartment to is a Mexican. Forget about ever buying a house from an asian, they will jack the price up on you because you're not asian! They are the most discriminatory in the housing markets, not to mention in the job markets as well. So I hope this brings the much needed diversity to this downhill slum! They should really close down all those shops across the street from flushing high school too! Half of those shops are chinese sex parlors! If you go by there, you will see very few people shopping in those stores! The most traffic I've seen was to go to that anime place over there, that's the only store worth while setting foot into!

Diversity my ass! That's what' has ruined NYC and this country!

"Community visioning project" - having the community read from a pro-development script making it look like shoehorning more people (while infrastructure while services already suck) is the only thing in the public's mind.

Adding the word 'affordable housing' to the script is always required even though it never really happens....

That narrow little side street (41st Ave west of Main St) is one of the toughest roads in Queens to navigate. It's virtually impossible to turn onto it from Main St - doesn't matter if you're turning left or right - since the pedestrians do not pay attention and do not stop walking. The street is too narrow and has parking on both sides, and vans that go back and forth to NYC's Chinatown park on the north side of the street near the corner. There's a pretty good auto repair shop there, but there's very little room for them to move cars in and out, and he has to sometimes put cars by the fire hydrants. And moving past that commercial area heading toward College Point Blvd, you have those ominous-looking houses, where Yu Yao was grabbed, raped and murdered as she walked past.

The only intelligent option is Senior Housing.
Residents would be selected by lottery assuring a mix of diversity. Most residents would not own cars so congestion would be diminished. Seniors would have easy access to transit if they wished to travel and stores and restaurants would be nearby. If you fill the project with families, you need to build more schools.
Remember, Senior Power! We vote!

How about the parking lot stays a parking lot and the affordale housing is put someplace with more space? How about the other side of Northern Blvd? Or up by Pathmark? There are blocks of abandoned buildings waiting to be torn down. Why does it have to be this lot?

THERE IS ENOUGH AFFORDABLE HOUSING IN FLUSHING. STOP THE MADNESS.

We have enough people living in this over stuffed neighborhood. Enough rusted balconies full of garbage. Enough fire hazards with the illegal room rentals.

Anonymous 2 mentioned:
Forget about ever buying a house from an asian, they will jack the price up on you because you're not asian! They are the most discriminatory in the housing markets, not to mention in the job markets as well.

So if you are purple or an alien from outer space, won't you also want to do the same and sell to the highest bidder. Thank you.