Bloomberg plans to stay out of it 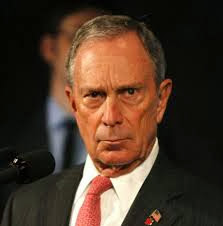 In an appearance on The View this morning, Mayor Michael Bloomberg said he has no plans to intervene in local politics after he leaves office at the end of the month.

“I won’t get involved in New York City politics," he told the panel of co-hosts.

The New York Times reported on Sunday that Bloomberg will establish a consulting firm, staffed by several of his current commissioners, to advise cities on how to effect Bloomberg-like policies, but the outgoing mayor has consistently said he plans to avoid any undue interference with his successor, Bill de Blasio.
Posted by Queens Crapper at 12:01 AM

Who in their right mind would hire his consulting firm given how he has effed up NYC?

Is anything working? Guests from Europe are always horrified at how shabby NYC looks!

How this this guy build an empire when he's such a shitty strategist!

Anonymous Said "Guests from Europe are always horrified at how shabby NYC looks!"

Well then why do they keep coming in record numbers?

Don't forget the illegal immigrant problems and the medicaid and food stamp fraudsters (oh right, they're one and the same)!

Good! I hope he goes and jumps in the East river after hes done in office!

Actually, lots of things are working. Whether they're working at optimal efficiency is a different story - and you can likely point a bigger finger to the employees rather than the manager for their inability to follow through on commitments.

"Guests from Europe are always horrified at how shabby NYC looks!"

Spitting gum on the sidewalk and or
just plain spitting was not tolerated during my childhood. When I see people doing it today I sometimes give them a dirty look or say something out loud on how disgusting the act was. I usually just get a ignorant blank stare back that says "What did I do ?" or "What are you looking at" !

Wouldn't it be awesome if gum spitters and other litterbugs and such were actually punished?

And all you Bloomberg haters, in six months you'll be wishing he could have been mayor for life. You seem to have no idea what's coming.

The only way to ensure keeping Emperor Bloomberg off our backs is to exile him to Elba, just like his idol Napoleon!

He's a puppet master, and there are a lot of wooden heads out there for him to manipulate.

Nice of you to stop by, Bloomie. Now get along to Bermuda.