Bloomberg wants boondoggle projects to be his legacy 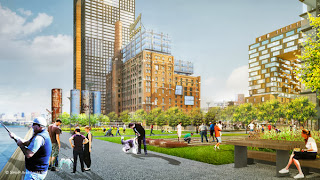 The Bloomberg administration has been pushing through more than $12 billion worth of real estate projects in its waning days, trying to solidify the mayor’s claim to having transformed the face of New York City and lock in plans before Bill de Blasio takes over Jan. 1.

The gusher of projects recently approved or on track for approval in Mayor Michael R. Bloomberg’s final days include an outlet mall and a giant observation wheel on Staten Island, totaling $580 million, and a relatively modest $16 million building in Manhattan with 55 experimental micro-apartments, as well as a $2 billion residential complex on the Brooklyn waterfront and the country’s largest indoor skating complex, to be built in the Bronx.

Mr. Bloomberg has sought to remake the city’s landscape for the 21st century, pushing for higher-density development and higher-quality design and opening up the city’s vast waterfront to new residential, recreational and commercial uses. Nearly 40 percent of the city has been rezoned during the mayor’s 12 years in office.

The man spearheading the efforts, the deputy mayor Robert K. Steel, and other officials have made it clear to the City Council, as well as to the real estate and construction industries, that they are determined to finish public reviews for a number of “legacy projects” before Mr. Bloomberg leaves office.

The projects, which will begin construction well after Mayor-elect de Blasio takes office in January, also bind the new mayor to the old mayor’s agenda, at least for a while. By Dec. 31, some projects, like a $1.2 billion Hudson Yards office tower and a $1.7 billion Hunter College and Memorial Sloan-Kettering Cancer Center complex, will have reached the point that they cannot be stopped or modified.

Others, like a soccer stadium in the Bronx, a Coney Island amphitheater and a residential complex at the former Domino sugar factory in Brooklyn, could still be halted or changed. The Domino project has won widespread support, but Mr. de Blasio has expressed “serious concerns” about a proposed $350 million soccer stadium near Yankee Stadium because the Bloomberg administration planned to provide the soccer team’s wealthy owners with public resources, including tax exemptions.

The Bloomberg administration has also granted tax breaks worth tens of millions of dollars for the first phase of the $3 billion Willets Point project in Queens, for a proposed office tower on the West Side of Manhattan and for the outlet mall on Staten Island.

“They made no secret about the fact that they’re working very hard to lock in a number of major projects for the future,” said Brad Lander, a councilman from Brooklyn. “De Blasio said everything will be reviewed. But some things can be reviewed and changed more than others.”

For his part, Mr. de Blasio, who was the city’s public advocate before being elected mayor, opposed few projects during the Bloomberg era and embraced the notion of high-density development near transit centers. But he has made it clear that he will drive a harder bargain with developers to get the best deal for taxpayers.

Sure he will.
Posted by Queens Crapper at 12:45 AM

Good riddance to the Animal Killer! He's a clueless POS that did nothing for Queens!

placing 10,000s on waterfront brownfields that will be an unimaginable health disaster,

moving 10,000s away from a battered soggy waterfront,

tearing down clusters of cheaply built falling down hotels and apartments that have become battered human barracks next to train yards, bridge ramps and elevated lines,

the destruction of low density neighborhoods with out of character housing, lack of quality of life enforcement, and the discouraging of owner-occupied housing, which by then will be considered the anchor of any community,

a bill of billions that will be placed on the shoulders of a generation crushed under debt to pay for infrastructure of hospitals, transit, etc

and finally all the wonderful things that the third world and destitute will bring in to a city dependent on Democratic machine tweeding programs.

The image of our era will be ugly highrise built by those with money but not taste, scandalous housing of families living in shipping containers, and Joe's pictures of Jamaica.

Nice legacy for a city that has brains and style, and looked the other way while this asshole ruined it.

Does anyone really think that the next Mayor will be able, or even want, to control the developers? which of our previous mayors did?

No one can control the developers - but life comes at you and the over development will start to effect quality of life as resources start to run out and the seas come in and people start to get very sick on those industrial sites - so it will have to be controlled.

The world is an interesting place: it forces balance as nothing can continue in the same direction forever.

I love it! What mental midget thought of this lunacy.

A nice quiet Saturday night ice skating in an ex-armory where one might actually need an armory to protect themselves against the mayhem that will ensue when someone accidently bumps into some dude's hotly dressed honey.

Hot lead and cold ice. At least they won't need a mortuary to stop the dead bodies from stinking up the joint.

The Bloomberg machine is unsustainable. It is collapsing under it's own weight right before our eyes. It's only a matter of time that the (over)developers will be driven out of town.

"INSTANT KARMA IS GOING TO GET YOU" - John Lennon