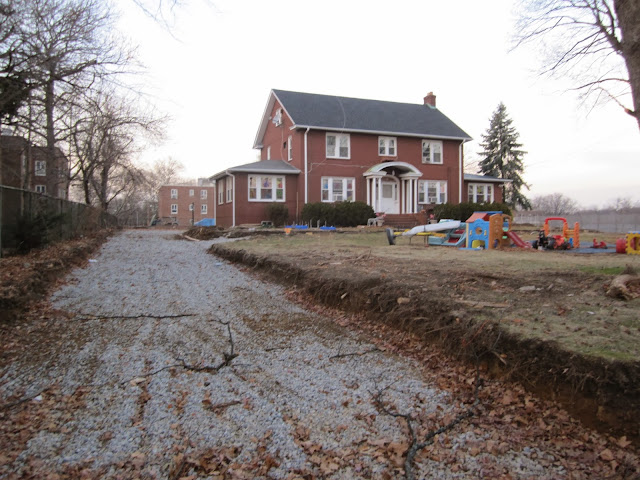 Aside from strong community resistance, the projects could not be implemented because the property is in the Fresh Meadows Special Planned Community Preservation District.

No changes can be made in the district without approval from the city Planning Commission. Then, the developer must also go through a lengthy and expensive Uniform Land Use Review Procedure.

A spokesman for the CPC deferred to the Department of Buildings, which enforces illegal changes made in a special district.

According to the DOB website there are three complaints that have not yet been resolved. They deal with illegal removal of the trees and expansion of the driveway with permits. A DOB spokesman was unable to answer why a fine has not been issued to Audrey Realty, an arm of Huang’s operation.

But Florence Fisher, president of the Mid Queens Community Council and a member of Community Board 8, said she was informed that no action has been taken because the DOB and CPC are arguing over the meaning of “substantial changes” to the property. “Trees give off oxygen and we need them,” Fisher said, adding that it’s time for the city to make an amendment to the law and include trees.
Posted by Queens Crapper at 12:48 AM

The Huangs are still at it. Big time. Still getting away with much. Is Tiffany Huang the new Chief Officer of the family businesses?

Tiffany Huang has been seen giving out eviction notices at one of their sites in Corona. She must be filling in for her brother Henry who appears only to have received a slap on the hand from the NYS Attorney General for his crimes.

On the surface, the Huangs appear to have sold the property on Queens Blvd. where the fatal collapse occurred. The new owner of record thought that they were going to move ahead full steam with their construction project after obtaining some new permits. Not happening! Nothing going on. Community will see to that.

The community will be proactive in seeing that the NYC DOB does what it needs to do to make sure that the new owner has gotten those permits legally.

The Bayside construction site where seven structures are semi-boarded up continues to deteriorate. Vandals have had their way with the site on a few occasions. It appears to be abaondoned. You may recall that Huang needs a variance to keep the fourth house. They filed an Application with the BSA. The community board; the Borough President and the DOB opposes the variance. The Huangs have failed to proceed at the BSA with the application.

The NYC DOB still nonetheless does not see fit and never has seen fit to oversee the project that once again presently has no permits. The four houses do not have certificates of occupancy.

The Huangs have a couple of complex litigation trials on the horizon. It would be interesting to see them squirm on the stand. Let's see if they have the stamina to go there?

Of course Huang will get away with it because of the crooked Queens political landscape--coupled with its anemic historical societies--powerless civic organizations--and the stupidity of its voters, who keep on empowering shady politicians.

That's the long and short of it folks!

Queens is a bereft borough compared to its neighboring Brooklyn.

Brooklyn outweighs us in spirit, culture, creativity and foresight.

I only live here because it's cheap--the best I can afford.

If I had my "druthers", I'd be living in Manhattan. Queens possesses a boring bedroom borough mentality.

What was it that the king of corruption, Donald Manes, once said?
"Queens has nothing but land, and I intend to develop every bit of it". It went something like that.

Furthermore, the borough president you just elected (I certainly didn't vote for her) is a developers' courtesan. Yes, that "alley Katz" will do for them--not for you.

And if any of you detest my plain speaking--FU! That's my parting hai koo!

Notice--I don't hide behind anonymity and stand by my words.

I dunno!
A run of the mill piece of vernacular architecture and the remnants of a farm.

I dislike what Huang is doing!
But is this the best that Queens has to offer that's worth saving?

This is not the first instance of trees being removed from a historic property in Queens - it was also done in 2007 and again in 2013 at the Fitzgerald-Ginsberg Mansion in North Flushing - and the city continues to turn a blind eye.

Jerry hit the proverbial nail on the head with his comment. There is nothing that can be argued about his statement, especially "Brooklyn outweighs us in spirit, culture, creativity and foresight."

We are the dumb hick boro of NYC.

They even took the name of our most famous bridge away and renamed it after a politician !
What's next changing the name of Queens Boulevard to Huang Way ?

I once referred to Queens the "wild west" (a name that has since caught on) over 25 years ago--when it comes to the many existing opportunities for developers to screw us.

Beyond being the hick borough of NYC (right on, Joe!) it's more like Deadwood.

Anyone who's seen that series might agree with me on that.

This is open territory--a lowdown mining camp-- where there is no law--beyond who you can buy!

There, I've done it--emptied all 6 chambers.
I'll never have a friend left in government.

Who needs 'em. They've rarely done anything to help, me that I couldn't do for myself!

The Fitzgerald-Ginsberg Mansion is located right next to "follow the buck" Chuck Apelian's house.
If CB7's major duomo don't give a damn, who the fuck should?

Somebody, who helped to stat it up, walked away and let John Liu take it over years ago.

The Fitzgerald-Ginsberg Mansion is located right next to "follow the buck" Chuck Apelian's house.

Actually, I just checked property records, and Chucklehead lives on 29th Road, not far from the mansion.

You can see some of the beautiful trees that used to be on the Fitzgerald-Ginsberg property in this photo, and this one.