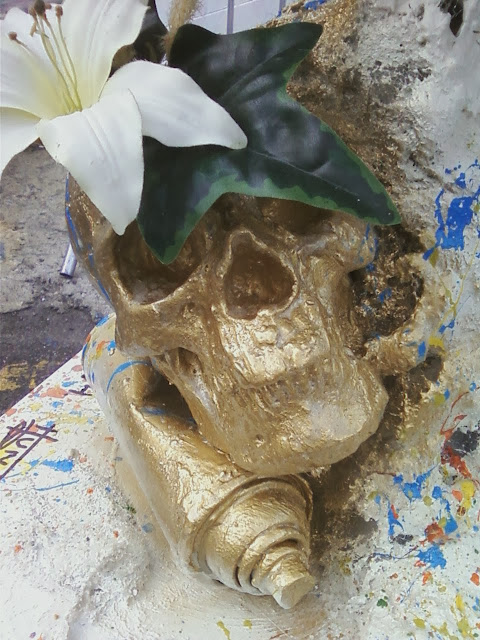 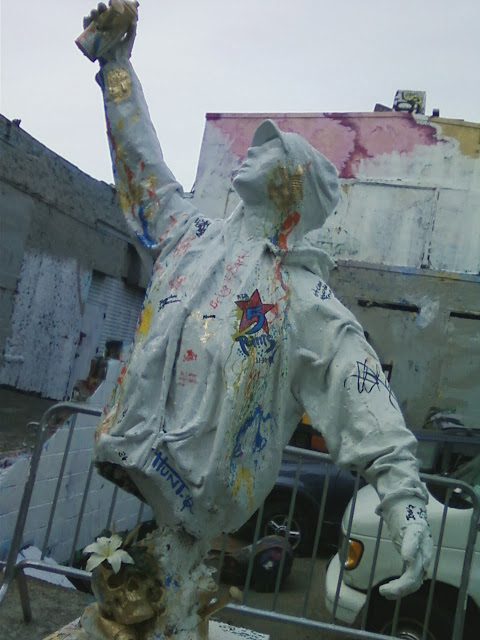 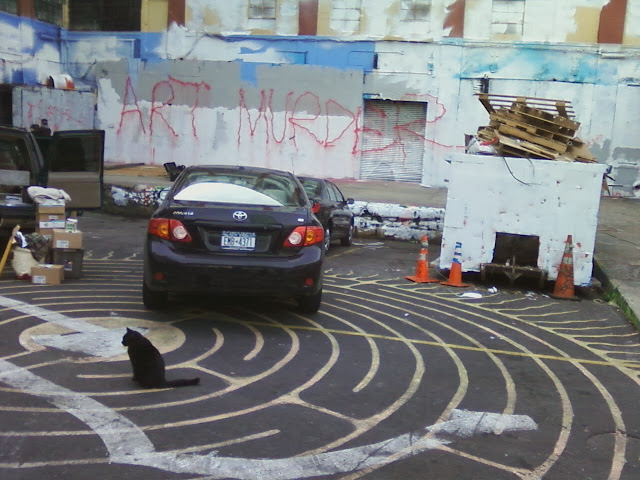 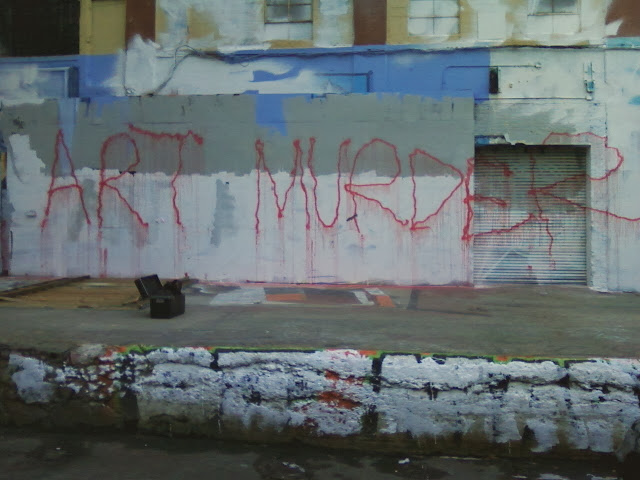 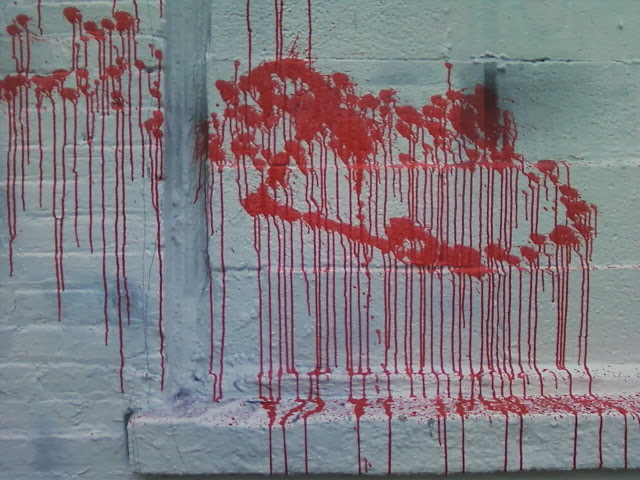 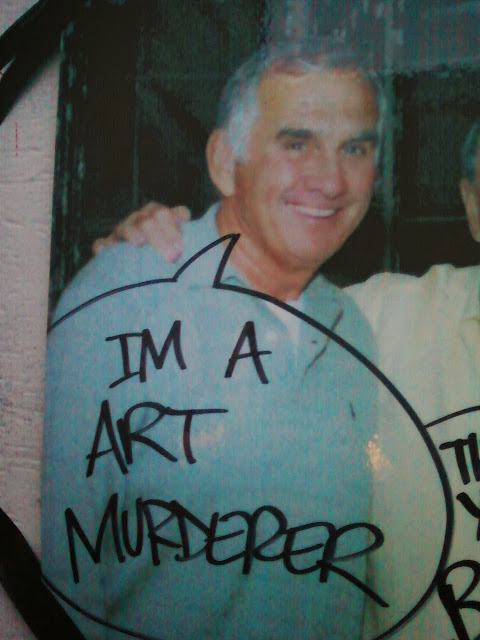 Photos by Jerry Rotondi
Posted by Queens Crapper at 12:50 AM

The sculpture isn't even good enough for here:

No demolition order filed yet...awaiting flip of property to Rockrose?

Rockrose just demolished a building behind 5 Pointz on Crane Street.

Listed in the order of their guilt for the brutal ART MURDER of 5 Pointz:

#4.
Borough President Helen Marshal (dumb as dirt, and thanks be, she'll be gone soon).

Since I'm no coward--or lack imagination as to what 5 Pointz could have become--I openly sign my name to this post as a proud 5 Pointz site volunteer for almost 20 years.
I was a board member of Phun Phactory which proceeded 5 Pointz.

I now await counter comments from all of you Archie and Edith Bunkers out there.

NEVER FORGET THESE CRIMINALS AND THEIR ACCOMPLICES!

Lord willing, may they NEVER rest in peace!

I have to wonder: according to reports, Mr. Wolkoff is fast approaching 80 years old. While what he plans to do with 5 Pointz may be more lucrative than what it is now, and I've even heard that there were some bad turns in developments elsewhere he hoped to offset, is a few million more - to an already wealthy guy by most standards - really worth wide public condemnation as an art murderer at this time in his life? Many in his circumstance would be art patrons, and looking to build a legacy. The choices people make with their money all along the spectrum are revealing.

Are those who post to this blog so blinded by their hatred of over-development that the concept of private property rights means nothing?
Just a thought.

He has the right to build on his property. The pols don't have to reward him by allowing a larger project.

Yeah, and Justin Bieber is a musician!

there is absolutely nothing wrong with grafitti,in fact the trains in 70s to early 80s looked a lot better with it.It's absurd in retrospect that street art was in the same league with all the murder,robberies,organized crime and rampant hard drug abuse in those days.

I wish I would have caught 5 pointz before it was massacred.I wholly support any protest that the artists and their associates have.the statue is amazing,good move whitewashing it too.

In a way,what the owners did was artistic also though derivative of Banksy's deleted message piece in greenpoint about his rejected ny times article.

and this is from an archie bunker type.

The caption "Im a art murderer" in the last photo, as opposed to "I'm an art murderer" says all that needs to be said about the education and intelligence of those who choose to spraypaint others' walls--and how highly society ought to value their opinions.

SECOND, use that education to get a good paying job.

THIRD, save some money.

FINALLY, if you choose, use that money to buy a building and decorate its walls as you wish.

If you don't own the building, and choose to spray paint its interior or exterior, you are at best a guest acting with the owner's permission and subject to that owner's decision on what to do with the property--which may very well include painting over your work. At worst, you are a vandal who defaced private property and deserve to be rewarded with a trip to the islands--or, more precisely, Rikers Island. But the bottom line is that if you don't own it, you don't control it. End of rational discussion.

Will the protesters at 5 Pointz help Queens fight the abuses that this represents?

Doubt it. They only care about 5 Pointz.

Then its time to move on.

You're also a spelling ignoramus.

The poor grammar choice was intentional, because it's Wolkoff, the target of the piece, who is saying it.

No. The poor grammar is the scribbler's ignorance. Betcha.

Jerry, Jerry. Why do you persecute me? What have I ever done to you?

I hate graffiti and am very happy this eye sore will be torn down.
Thank you to the building owners.

It will be the happiest day of my life to never have to see this trash again.

sometimes nice art work was on the building but real quick, some little gang banger would spray stolen paint all over it, making it once again a very ugly place.
The lower and working classes like to live in filth and squalor. They can't abide beauty, order and cleanliness.

Graffiti is not art. In this day and age it's advertising for drug dealing and gangs.

Spraying paint on a building is property damage and is a crime.

These people who love Five Pointz so much have never done a dam thing for tenants or workers rights in Queens. They seem like the type that love illegal immigrants. Let them all go back to the suburbs that spawned this evil.

Please blow up this building already and stop these hipster losers from complaining.

This is privately owned property, the owner can do what he wishes. Graffiti is disgusting, it isn't art.

Gerald Wolfoff can do whatever he likes with his privately owned plot of land.

Thou halt not crucify mankind on a cross of graffiti.

But do not worry, there are so many buildings to be vandalized or have been already vandalized in NYC that the "art" will not go away any time soon. And I am very sure that new elected mayor will "inspire anyone to voice their graffiti for social justice" ...

I generally find myself in agreement with your posts. However, this time I must disagree. The building is privately owned and is not a museum and or government building. The owner has every right to do with it at he pleases.

Now , when it comes to
Any variances and or exceptions. They should not be granted unless he provide "public" space for
The artists. The artists can then get together with art institutions and form a 501c3 or the likes and run the space.

Other than that, he should
Be able to build whatever the zoning calls for.

I think without a variance, he gets to rebuild the former Neptune Water Meter Factory, as a factory or other industrial property. (And remember they used a lot of mercury and lead in their products.)

Heavy industry returning to LIC? Don't hold your breath for that.

I think the Wolkoff variance needs to be given to every own a similarly zoned property in Queens. If its good for Five Pointz, it's good for everywhere in Queens.